Ryan Gajewski, The Hollywood Reporter
Published 11:56 AM EDT, Mon June 22, 2015
Link Copied!
Netflix knew fans were chomping at the bit for the third season of "Orange Is the New Black," so they released it a day ahead of the scheduled June 12 premiere. Allow us to remind you who's who.
Netflix
Piper Chapman (played by Taylor Schilling) is an entrepreneur who lands in jail for drug offenses she committed years earlier.
Lionsgate
Alex Vause (Laura Prepon) was Piper's former lover who caused her to go to jail because of Alex's involvement in drug smuggling when the two were a couple. The pair meet again in prison.
ali goldstein/netflix
Sam Healy (Michael Harney) is a counselor and corrections officer at Litchfield Penitentiary in upstate New York. He has issues with lesbians and causes problems for Piper.
jessica miglio/netflix
Miss Claudette Pelage (Michelle Hurst) is one of the oldest inmates at the prison. She ends up there after killing a client who abused an employee at her cleaning company. Other prisoners fear her.
barbara nitke/netflix
Galina "Red" Reznikov (Kate Mulgrew), right, runs the prison kitchen and is a force to be reckoned with.
david giesbrecht/netflix
Nicky Nichols (Natasha Lyonne), left, is a recovering drug addict and Lorna Morello (Yael Stone) a kitchen worker who, in season one, were friends with benefits.
jojo whilden/netflix
Lorna, left, with Suzanne "Crazy Eyes" Warren (Uzo Aduba), a disruptive inmate who takes a special liking to her "Dandelion," Piper. Her more sensitive side is revealed in season one.
K.C. Bailey/Netflix
Sophia Burset (Laverne Cox) is transgender and serves as the prison's hairdresser. Her sexual identity causes her to sometimes be bullied by some of the other inmates.
jojo whilden/netflix
Prison guard John Bennett (Matt McGorry) and inmate Dayanara "Daya" Diaz (Dascha Polanco) begin an illicit love affair that puts his job at risk.
k.c. bailey/netflix
Tiffany "Pennsatucky" Doggett (Taryn Manning) is a meth-addicted born-again Christian who is not above attacking fellow inmates, including Piper. In season two she becomes less devout.
netflix
Aleida Diaz (Elizabeth Rodriguez) is Daya's mother. Doing time for drug charges, she appears to not love her daughter initially but is later revealed to be protective of her.
ursula coyote/netflix
Jason Biggs plays Larry Bloom, a journalist and Chapman's (formerly) doting fiancé. He stood by her in season one even when the more sordid details of her past were revealed but becomes increasingly disenchanted and eventually exploits her prison sentence to bolster his career.
Netflix
Pablo Schreiber plays corrupt prison guard George Mendez, better known as Pornstache (one guess why). He breaks all the rules, from smuggling drugs into the prison to having sex with inmates. In season one, he is suspended without pay for his actions.
Netflix
Lorraine Toussaint joined the cast in season two as Yvonne "Vee" Parker, shown here with Gloria. Former drug runner Vee clashes with the other inmates, including Red.
Jessica Miglio/Netflix
It was announced in August that comedian Mike Birbiglia as joining the cast in season 3. He was guarded about the details of his role in an October interview with People magazine.
Bryan Bedder/Getty Images for FIJI Water

'Orange Is the New Black': Get to know the cast

Schilling suffered a mishap while filming

She said there was blood

The actress appeared on a recent episode of “Late Night,” where she told host Seth Meyers that she cut herself on her name tag while taking her top off during a sex scene.

“I hurt myself,” Schilling said. “I got very excited, I took my shirt off and I scratched myself with my little name tag.”

Read more: ‘Orange Is the New Black’ 6 shockers from Season 3’s first half

“There was a gash on my face — there was blood,” she continued, adding that the show needed to take an hour break from filming while she had the cut looked at.

Orange’s third season is currently available to stream on Netflix. Schilling’s “Late Night” segment can be seen below: 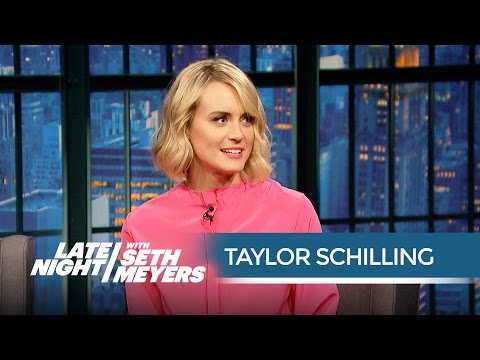 See the original story at The Hollywood Reporter’s web site.

©2015 The Hollywood Reporter. All rights reserved.