Why UFC ‘beast’ Ronda Rousey is such a big deal

Early in her career, she made Olympic history in judo

It’s the video you have to watch from this weekend: American mixed martial artist Ronda Rousey takes down Brazilian Bethe Correia on her own turf in just 34 seconds at the Ultimate Fighting Championship’s Women’s Bantamweight Title Fight.

With the swift knockout, the 28-year-old defending champion maintained her dominance as the only female bantamweight champion in the UFC with a 12-0 record.

Her fight against Cat Zingano in February also ended swiftly, thanks to her signature move, the armbar. Rousey tackles her opponent to the ground, traps the other woman’s arm between her legs and bends it back at the elbow. If her opponent doesn’t tap out to signal defeat, the move could snap the arm. Zingano tapped out in just 14 seconds, the fastest submission in a UFC title fight, according to MMA Weekly.

Rousey’s groundbreaking career is full of firsts and superlatives. She’s been called a pioneer, a megastar, a badass, a beast. She’s also been called arrogant, brash and cocky. Few would dispute her claim that she’s “the best fighter in the whole world” – male or female. But her unabashed confidence has made her a polarizing figure in the male-dominated world of sports.

Magazine profiles and TV interviews play up what they call contrasting qualities, as if none could mutually exist: an attractive woman excelling in a bloody sport; friendly and laid-back in person while exhibiting brute force against opponents; masculine in physicality while relying on her sexuality to sell magazine covers.

She’s not afraid to call out – or blow off – critics, and she does not mince words in describing her perceived advantages over opponents, in and out of the ring. When asked whether she would ever fight boxer Floyd Mayweather, her response was “unless we ended up dating,” an apparent reference to domestic violence allegations against him.

In July, when she took home the Best Fighter ESPY award over Mayweather and others, she remarked, “I wonder how Floyd feels being beat by a woman for once.”

She appears to have accepted her provocateur role. As she told the New Yorker in 2014, “I’m the heel. I’m the antihero. … And I like it that way.”

Even if you’re unfamiliar with Rousey’s record-breaking feats in the octagon, there are plenty more reasons to give her credit where credit is due. Here are a few:

Before Rousey was a UFC champion, she was a top-ranked judoka in the United States.

In 2008, she was favored to become the first American woman to win an Olympic medal in judo, according to her first New York Times profile.

She began training after the death of her father by suicide when she was 8. Before then, swimming was her sport, something she did with her father. After his death, she took up her mother’s sport, judo, and began traveling the country to train.

She was 17 when she went to the 2004 Summer Olympics in Athens but fell short of a medal.

She won a silver medal at the 2007 world championships. Her second visit to the Olympics in Beijing in 2008 went better. She took home a bronze medal and became the first American woman to earn an Olympic medal in judo.

She considered training for 2012 until deciding that MMA fighting offered a better chance of a career. She began training in 2010 in Southern California’s Armenian-American fighting community, learning boxing and muay thai techniques before starting to fight on the amateur MMA circuit.

She’s inspired by her mother, who also made sports history.

In 1984, Rousey’s mother, AnnMaria De Mars, became the first American – man or woman – to win gold at the World Judo Championships in Vienna. With few options for professional female judokas at the time, she turned her sights to a career in psychology and raising a family.

Rousey, De Mars’ third child, was born in 1987. Birth complications led to a speech defect that left Rousey unable to speak until she was 5 or 6 years old. Rousey’s father, Ronald Rousey, helped his daughter with speech therapy and pushed her toward competitive swimming.

After her father’s death in 1995, Rousey took up judo training under her mother.

In addition to judo technique and skills, Rousey says, she also learned not to be “the kind of chick that just tries to be pretty and be taken care of by somebody else.” She has a term for it: “do-nothing b***h,” or a “DNB,” she said in a UFC YouTube vlog.

It’s the rationale she uses to fend off critiques that her body looks “masculine.”

“I think it’s feminist-ly bad-ass … because there isn’t a single muscle in my body that isn’t for a purpose,” she said.

That may not be eloquent, she acknowledges, “but it’s to the point, and maybe that’s what I am. I’m not eloquent. I’m to the point.” 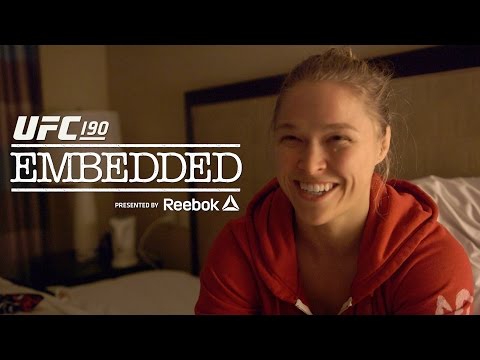 She’s had crossover success in Hollywood.

In several interviews, she has spoken of her desire to figure out her next move after fighting, much like her mother did. For now, she’s spreading her reach into Hollywood.

You might recognize her from the silver screen or numerous magazine covers. This year, she appeared as herself in “Entourage” as a love interest of one of the main characters. She also appeared in “Furious 7,” mixing it up with Michelle Rodriguez, and “The Expendables 3” with Sylvester Stallone, Arnold Schwarzenegger, Wesley Snipes and Dolph Lundgren.

We’re not ready to nominate her for an Academy Award, but there are clear benefits to making friends in Hollywood. The vintage action heroes were among her squad of celebrity cheerleaders Saturday night, honoring her with nicknames and titles usually accorded to male athletes.

Rhonda rousey is a beast Daaaaaaaaaam

Ronda Rousey is the Greatest Champion of this era! Keep Punching CHAMP!

She also served as a head coach on season 18 of “The Ultimate Fighter,” the UFC’s reality show, in which up-and-coming fighters live together while competing in a tournament to win a UFC contract.

She bonded with her roommates: Jessamyn Duke, Shayna Baszler and UFC newcomer Marina Shafir, who are now known by fans as the Four Horsewomen of MMA – a moniker based on the famed 1980s pro wrestling team the Four Horsemen. The Four Horsewomen sill live together in Venice Beach, California, not far from the Glendale gym where Rousey trains under Gokor Chivichyan of the Hayastan MMA Academy and Edmond Tarverdyan of the Glendale Fighting Club.

Throughout her career, Rousey has been outspoken about insecurities with her body and how it led to substance abuse and bulimia in her teens.

The pressure to make weight aggravated her insecurity about her thick, muscular body, and she became bulimic as a teen.

“Whenever people talk about how cocky and arrogant I am, it blows me away, because I worked so hard to develop self-confidence,” she told the New Yorker.

She has held fundraisers and participated in awareness campaigns for treating eating disorders.