A NASA camera shows the moon transiting Earth, with the far side illuminated

You can’t call it “the dark side of the moon” based on a new NASA picture.

A camera on the Deep Space Climate Observatory (DSCOVR) satellite shot an arresting view of the moon crossing in front of the Earth. The image clearly shows the moon’s far side lit up by the sun – though even in full sunlight, the Earth is far brighter.

“It is surprising how much brighter Earth is than the moon,” DSCOVR project scientist Adam Szabo said in a news release. “Our planet is a truly brilliant object in dark space compared to the lunar surface.” 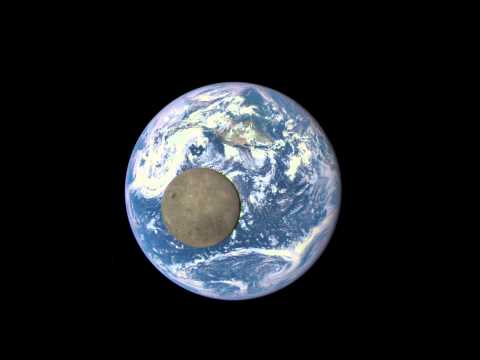 DSCOVR, which is a partnership between NASA, the National Oceanic and Atmospheric Administration and the U.S. Air Force, is equipped with NASA’s Earth Polychromatic Imaging Camera, a 4-megapixel CCD camera and telescope. It’s orbiting between the Earth and the sun at a distance of 1 million miles.

Though the moon’s so-called dark side isn’t visible from Earth – thanks to the “tidally locked” moon always presenting the same side to its terrestrial neighbor – It’s far from the first time we’ve seen it.

This color image of Earth was taken by NASA's Earth Polychromatic Imaging Camera (EPIC), a four megapixel CCD camera and telescope on the Deep Space Climate Observatory satellite on July 6, 2015.. The image was generated by combining three separate images to create a photographic-quality image.
NASA
gallery

The Earth from afar

In 1959, the Soviet Union sent a probe to photograph the far side, and it followed up with another probe in 1965. Astronauts from Apollo 8, in 1968, were the first humans to view it, and most other Apollo missions also viewed it.

It’s not an inspiring sight, one astronaut said.

“The back side looks like a sand pile my kids have played in for some time. It’s all beat up, no definition, just a lot of bumps and holes,” noted Apollo 8’s William Anders.

NASA photographed the moon crossing in front of the Earth in 2008, but the moon was only partially illuminated. Moreover, those images were taken from 31 million miles away.

DSCOVR’s primary role is to monitor the solar wind for NOAA, which is “critical to the accuracy and lead time of space weather alerts and forecasts,” says NASA.