"The Usual Suspects" hit movie theaters 20 years ago this month

In August 1995, a crime drama called “The Usual Suspects” opened in a handful of theaters and soon accomplished two remarkable things.

The movie blindsided viewers with its twist ending, which left them reconsidering everything they had watched in the previous hour and 40 minutes.

And it introduced the world to Keyser Söze.

Despite the fact that his true identity was hidden until the film’s closing seconds, Keyser Söze has become one of the most fabled villains in movie history, referenced in everything from “Buffy the Vampire Slayer” to “American Sniper” to “Trainwreck.”

Not a bad legacy two decades later for a little-hyped independent film that was only a modest hit, grossing $21 million at U.S. box offices.

So how did this happen?

The twist (Warning: SPOILERS ahead)

Directed by Bryan Singer, who went on to make the “X-Men” movies, and written by Christopher McQuarrie, who directed the new “Mission Impossible,” “The Usual Suspects” is about a gang of low-level criminals rounded up for a police lineup.

One of them, Roger “Verbal” Kint (Kevin Spacey, who won an Oscar for the role), is a sad-sack con artist with a mangled hand and a limp. Questioned by a federal customs agent, he reveals the movie’s story in flashbacks, punctuated by whispers about a feared, near-mythical gangster named Keyser Söze who is so ruthless, he kills his own family to keep from being bested by his rivals.

Söze hides his identity so carefully that even most of those working under him don’t know what he looks like. Near the end of the movie, the agent releases Verbal, only to realize too late that he made up his entire story, using names and details scattered about the office where he was being interrogated. 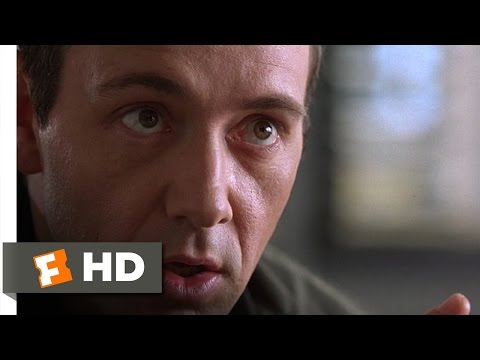 In the last scene, Verbal, striding without a limp to a getaway car and lighting a triumphant cigarette, is revealed to be Keyser Söze. (Trust me, it works much better on film.)

As Verbal tells the federal agent, quoting the French poet Baudelaire, “The greatest trick the devil ever pulled was convincing the world he didn’t exist.”

First, there’s the name. Pronounced KAI-zer SOH-zay, it even sounds ominous. Plus, it’s fun to say.

Executives at Gramercy Pictures were concerned that audiences might not be able to pronounce the name, so they launched a teaser campaign with the tagline “Who is Keyser Söze?” and made TV ads instructing people how to say it.

Even today, when you type “Who is k_____?” into Google, the character’s name is one of the first things that comes up.

McQuarrie and Singer cleverly created a mythical persona around Söze by not revealing too much about him. We see him in flashback, slaughtering a roomful of people, but we never see his face. Until the end.

“Nobody has ever seen him since. He becomes a myth, a spook story that criminals tell their kids at night: ‘Rat on your pop, and Keyser Söze will get you.’ ”

Since “The Usual Suspects’ ” release, “Keyser Söze” has come to mean a renowned figure who is feared but elusive – someone everyone hears about but no one ever meets in person.

In 2010, Entertainment Weekly ranked Keyser Söze 37th on its list of the greatest pop-culture characters of the past 20 years, ahead of Ron Burgundy, Jerry Maguire and “24’s” Jack Bauer.

In a roundabout way, the character has even inspired the sharks of the business world. Forbes published a column two years ago headlined, “What Would Keyser Söze Do?” that argues that to get ahead, “you need the will to do what other people won’t do.”

The head-slapping climax of “The Usual Suspects” (its script won an Oscar) encouraged other screenwriters to surprise audiences in the final reel and paved the way for “The Sixth Sense,” the modern king of twist-ending movies, four years later.

It also made surprise endings fashionable in Hollywood. The next half-decade saw a flurry of twist-ending dramas and thrillers, from “Seven” and “Primal Fear” to “The Game” and “Memento.”

In his review of 1999’s “Fight Club,” another movie with a twist ending that plays with notions of identity, Roger Ebert wrote, “A lot of recent films seem unsatisfied unless they can add final scenes that redefine the reality of everything that has gone before; call it the Keyser Söze syndrome.”

Twenty years later, “The Usual Suspects” still shows up near the top of almost every list of movies with the best twist endings.

But the movie, and the 1990s thrillers that followed, may have had another, less desired effect: They made it much harder for filmmakers to truly shock audiences.

“After the ’90s, the unexpected was always expected,” wrote Michael Howard last year in Esquire.

“Postmillennial films like ‘Identity’ and ‘Memento’ were excellent in the same pursuit, but the ’90s were the greatest era of plot-warping-finale mind enemas to ever grace the silver screen,” he wrote. “‘The Sixth Sense’ met ‘The Usual Suspects” standard, and that will never be outdone.”