Singapore is teaching the world how to build efficient public housing, architect says

Think of public housing estates and you may imagine grimy stairwells and unloved communal spaces.

That’s certainly not the case in Singapore, which for more than 50 years has been transforming public housing from basic blocks to slick high-rises.

Residents are currently receiving the keys to their apartments in Skyville, a 47-storey building that was 12 times oversubscribed and sold out within days of flats being offered, off-plan, several years ago.

“Ours was the first development to offer floor plan options, so in a flat that potentially had three bedrooms you could choose to put in only two bedrooms and have a very big living-dining (room) or have room for a home office,” says Richard Hassell, founding director of WOHA Architects, which built the block in conjunction with Singapore’s Housing and Development Board (HDB).

The development is a cluster of 12 “villages,” each made up of 80 apartments, which share communal landscaped areas – or “sky gardens.”

The design is incredibly simple, Hassell says, and incorporates natural light and ventilation to make the building more energy-efficient and appropriate for Singapore’s tropical climate.

“If you want to cook a big curry meal you just open the window. You can dry all your clothes naturally; there’s a proper drying yard and a hanging rack. Every single bathroom has a window to the outside.”

The concept seems simple but it’s one that’s often overlooked in countries with a similar climate, which also face the same challenges of keeping buildings cool but running costs low.

“What we’ve seen is that far too many experts from the temperate world exporting their models to the tropics, which are quite inappropriate in many ways,” Hassell says.

“We think Singapore is a really great example of a city that’s setting up a whole lot of alternative models that are maybe more appropriate for a lot of locations.”

A history of public housing

Singapore started its mass public housing project in the 1940s, led by the Singapore Improvement Trust, which by 1959 had built more than 20,000 flats. Even after that initial surge of housing construction, most Singaporeans were still living in rented cubicles or unregulated squatter settlements.

When then-Prime Minister Lee Kuan Yew came to power at the end of the 1950s he demanded action, and fast. Within three years, another 30,000 flats were built. Now there are more than one million.

Of the 80% of residents who live in apartments built by the government, 90% own them. They’re helped by government loans, and use the money saved through the government-run pension scheme, the Central Provident Fund.

Residents apply for their homes through the HDB, and it can be a very lengthy process. It’s faster to join the resale market, but sales are restricted by rules banning turnover of new flats during the Minimum Occupation Period (MOP), which is currently five years. The rule prevents “flipping,” or the practice of selling on flats for a huge profit. 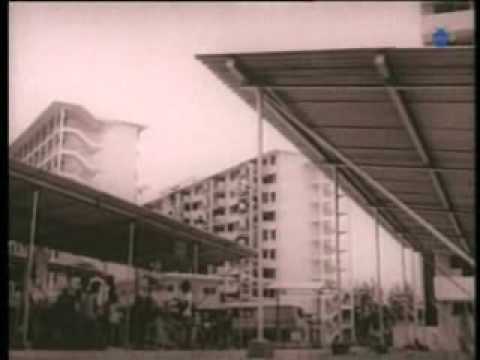 Building for the future

Hassell describes his company’s next project, Kampung Admiralty – currently under construction with HDB – as a “rule changer,” in that it’s the first to combine aged-care housing with other facilities, including a kindergarten and hawker center.

“I think (the government) has realized that rigidly segregated town planning lacks a certain amount of buzz and interest that older cities have. So this is a way of starting to put things together to get that interesting urban buzz you get from mixed-use intense developments,” he says.

It’s one of a number of new projects set to open by 2020. Earlier this month, the government announced plans to create four new neighborhood centers, which it promises will include “complete live-work-play-learn environment for residents.”

The developments include the first seafront community of public flats, including shops, restaurants and childcare centers, called Northshore Plaza in Punggol, one of the more rural parts of the islands.

“We want to plan towns that are well designed, (and) sustainable as well as community-centric,” Fong Chun Wah, Group Director, Development and Procurement of the HDB was quoted saying.

“HDB is not just a developer and master planner, we also play a social role.”

Northshore Plaza —
Northshore Plaza will be the first seafront neighborhood center in a residential estate built by the Singapore government. It's meant to be much more than a home -- it'll include a supermarket, food courts, restaurants, shops and childcare centers. It's also being used as a test case for new technology including Smart Fans, which are activated by wind speed, temperature and human traffic patterns. The development is expected to be completed in 2020.
Singapore HDB
Oasis Terraces —
Like Northshore Plaza, Oasis Terraces will also include access to an MRT station. It was designed after a public consultation program to see what people wanted most. A dedicated pedestrian thoroughfare will give residents direct access to the waterway. It's expected to be completed in 2018.
Singapore HDB
Canberra Plaza —
This three-story development is being sold as a "one-stop destination for all generations." There'll be an event plaza designed to host community activities. For children, it includes a water-themed playground. The building's expected to be completed in 2019.
Singapore HDB
Buangkok Square —
Buangkok Square links the community plaza to a nearby park, and includes "rain gardens... fitness stations and shelters." Like the other developments, it includes shops, kiosks and dining outlets. The center is expected to be completed in 2018.
Singapore HDB

Singapore's public housing for the future