Not so long ago, the most famous naturalist and nature broadcaster in the world, David Attenborough, was a self-professed climate change skeptic.

His conversion from doubter to evangelist, in front of his millions of devotees, has tracked with the growing acceptance by the public and policy-makers alike about the danger of climate change.

Now nearly 90 years old but spry as ever, his signature baritone intact, Attenborough is in Paris as world leaders converge for what could prove to be the most important gathering yet of countries aiming to speak with one voice on reducing carbon emissions.

“I make natural history programs on television,” Attenborough told CNN’s Christiane Amanpour on Monday in Paris. “Now, if you do that with the regularity I do, you have a hugely privileged position. And so you don’t want to start talking about things that you aren’t sure are true.”

“It’s only in the past decade,” he wrote for The Independent in 2011, “that I have come to think about the question of whether or not what I, or anybody else, has been doing, could have contributed to the change in the climate of the planet that is undoubtedly taking place.”

“I was skeptical about climate change. I was cautious about crying wolf.”

He had had “private concerns,” he told Amanpour, about the world’s rising temperatures but was wary – with his public profile and lack of climate expertise – of speaking out irresponsibly on the issue.

“But for the past 10 years, really there has been no question as to how … humanity has been responsible for this rise in temperature.”

Deniers, of course, remain, even as it seems “obvious” to everyone else.

“It’s much easier to deny it than it is to accept it,” Attenborough said. “Particularly for some people who, it might cost them a lot of money to accept it rather than to deny it.

“We must minimize this. It’s not easy. But it can be done.”

If America could put a man on the moon less than a decade after President John F. Kennedy set out the challenge, he told Amanpour, “surely to goodness” scientists working together should be able to solve this problem, too.

“One five-thousandth part of the energy of the sun – that goes on this planet every day – if we could tap that, we would provide all the power requirements for the whole of humanity. Think of that.”

The cost of solar energy has fallen dramatically in recent years, and there are massive solar projects underway around the world.

But most experts say that no one technology is likely to be a silver bullet. Solar, for example, is effective only when the sun is out and in countries where sun is plentiful. Until the cost of energy storage – batteries, essentially – can be massively improved, solar will be no solution for heating winter homes or lighting night-time kitchens.

‘Humanity is coming to its senses’

Attenborough’s expertise, the focus of his dozens and dozens of documentaries, is animals.

They are certainly feeling the crunch, he said, whether because of climate change or other factors.

“More and more species are on the brink of extinction. There’s no doubt about that,” he said.

SUN VALLEY, CA - DECEMBER 11: The Department of Water and Power (DWP) San Fernando Valley Generating Station is seen December 11, 2008 in Sun Valley, California. Under a new climate plan before state regulators, California would take major steps toward cutting greenhouse gas emissions. If adopted by the California Air Resources Board, it would be the most ambitious global warming prevention plan in the nation, outlining for the first time how businesses and the public would meet the 2006 law that made the state a leader on global climate change. The action would lead to the creation of a carbon-credit market to make it cheaper for the biggest polluters to cut emissions, and change the ways utilities generate power, businesses use electricity, and personal transportation (Photo by David McNew/Getty Images)
David McNew/Getty Images North America/Getty Images

Nonetheless, he said, no “major species” has been brought to extinction in his lifetime.

“Humanity is coming to its senses.

“I was with mountain gorillas when they were reduced to less than three figures. And there are more now than there were then.”

Other species have not been so lucky. The death of a white rhino at a San Diego zoo last week brought the total population of that subspecies to just three.

Many rhinos and elephants have fallen victim to poachers. Those poachers are more often than not after the animal’s horns and tusks, which many people believe to possess all sorts of medicinal benefits.

“We are gullible, and we like myths; we like stories,” Attenborough said. “And there is one. And if your sex life is important, and you believe that there is this potion, you think, ‘Well, why not give it a go?’ “

‘Why should we suppose it was going to be easy?’

The COP21 climate conference in Paris, Attenborough said, is “almost the last chance” to get a handle on climate change.

“I sense a realization amongst people worldwide and politicians worldwide that this is real, this is it, something has to be done.” 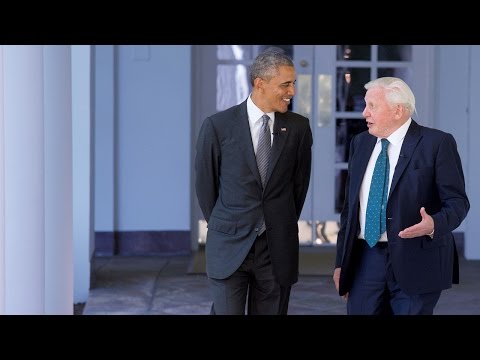 This year, President Barack Obama interviewed Attenborough about his life’s work in a strange role reversal.

The impression he got, Attenborough said, was that “he was a man who understood what the problem was and who genuinely, desperately … thought that he could find a solution.”

“And he has to steer that through the complexities of American politics as well as international politics. So it’s not easy.

“Never in the history of all humanity have all the world come together and agreed on a solution. Never, ever. So why should we suppose it was going to be easy?

“It’s not easy, because a lot of people have different interests. But it can be done, because as we see, the dangers of not doing it, the pressures on doing it, are increasing.”