Blizzard is over on East Coast, but Monday travel could be daunting

NEW: The Long Island Rail Road will reopen tracks servicing about 80% of riders

The bottom line: Just because the snow’s stopped falling doesn’t mean it’s back to business as usual.

“Every state that picked up some snowfall is going to be looking at refreezing every night,” CNN meteorologist Tom Sater said.

The possibility meant officials warned of dangers Sunday even as they trumpeted the progress their cities were making at cleaning up after the storm.

“We will see continued slick and dangerous roadways, so continue to stay off the road,” Washington Mayor Muriel Bowser told reporters.

“I’m asking for residents to continue to be patient. … A record amount of snow must be removed,” she said.

The Long Island Rail Road, which officials said sustained significant damage during the storm, planned to reopen seven of its 12 branches in time for Monday morning’s commute. The other five branches – representing about 20% of traffic in the rail system – remain closed for repairs.

Limited flights were set to resume at airports Monday in Washington, where officials said crews were working to dig out runways after the storm. 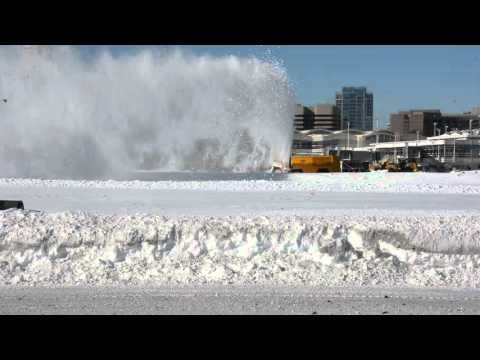 The storm killed at least 15 people, grounded thousands of flights and shut down travel in many of the nation’s largest cities.

There were signs of some relief Sunday as residents shoveled snows and cleaned up flooding debris beneath blue skies.

But officials said there was more work to be done, and schools and government offices in many areas were set to remain shuttered.

As cleanup continues, U.S. federal government offices in the Washington area will be closed on Monday, officials said.

So will government offices in Maryland, the state’s governor said.

“Tomorrow morning, conditions will be icy and dangerous,” Gov. Larry Hogan said in a written statement. “By closing state offices tomorrow, crews can carry on with their work to clear state roads.”

One of the hardest-hit locales was Glengary, West Virginia, a small town about 85 miles northwest of Washington, which preliminary figures show received 42 inches of snow.

But snow wasn’t the only product of the storm. Dewey Beach, Delaware, and Virginia’s Langley Air Force Base both reported 75-mph winds, just over hurricane force.

In New Jersey, some residents said they were reeling from flooding that was worse than devastation caused by Superstorm Sandy.

“There was much more water. … Everybody was affected. It was bad,” said Keith Laudeman, who owns a restaurant in Cape May, New Jersey.

Jason Pellegrini says he saw the water rushing in from his home in Sea Isle City, New Jersey.

“I heard commotion out my window, and I looked and I saw the raging water,” he said. “It came in to the low-lying areas, and it rushed fast.”

In North Wildwood, the high tide was much higher than anticipated and caught many of the town’s 5,000 year-round residents off guard – with flooding levels that exceeded those during Sandy, said Patrick Rosenello, the city’s mayor.

“We had a lot of evacuations, a lot of people who had stayed in their homes not anticipating this, needing to be rescued,” Rosenello said.

Why milk, bread and toilet paper when it snows?

At least 15 people have died as a result of the storm – six in North Carolina, three in Virginia, one in Kentucky, three in New York City, one in Maryland and one in Washington. Officials have cited a higher collective death toll, but CNN has not been able to confirm the individual reports and it’s unclear if all reports of death are related to weather.

Officials in New York and Baltimore also said there were reports of people dying while shoveling snow.

What to watch while you’re snowed in

Hundreds of motorists faced the storm’s wrath stuck on highways.

The massive backup, which left some motorists stranded for almost 24 hours, spurred an apology Sunday from the turnpike’s chairman.

“I can promise you all that there will be a thorough analysis of the events that led up to this incident as well as a review of what occurred over the course of the last two and a half days,” Pennsylvania Turnpike Commission Chairman Sean Logan said in a written statement. “I want to be certain that we do a better job the next time something like this occurs, and that we can learn from this tragedy.”

In central Kentucky, some drivers were stranded along a 35-mile stretch of Interstate 75 for as long as 19 hours, from Friday afternoon to Saturday morning.

And as many as 200 vehicles were stuck on Interstate 77 in West Virginia, the Charleston Gazette-Mail reported.

Mass transit services in Washington and Baltimore were suspended for the weekend. And some Amtrak service to and from the East Coast has either been canceled or truncated.

Broadway, where Saturday shows were canceled as the blizzard raged, saw its electricity restored and all shows scheduled for Sunday will be performed as planned, according to The Broadway League.

“The show must go on,” League president Charlotte St. Martin said in a statement.