The smell of success? $115 bottles of British air sold to Chinese buyers

Hopes to cash in on Chinese New Year by offering $1,200 gift set

An idea dreamed up out of thin air appears to be earning one businessman some serious money.

British entrepreneur Leo De Watts, 27, has made thousands of dollars selling bottles of British country air to Chinese buyers, but the price alone – £80 ($115) per bottle – could knock the wind out of many customers.

De Watts says the 580 ml (about 20 oz) glass jars have been flying out the door, many headed for pollution-plagued Chinese cities such as Beijing and Shanghai.

Since launching late last year, his air farming company Aethaer has sold hundreds of containers of clean breeze from windswept locations across Britain – including Dorset, Somerset, and Wales.

Setting off with a car full of empty jars at 5 a.m., the team “harvests” air in large nets and seals it in the glass jars before shipping it across the world.

“Quite often a lot of our orders are bespoke – we have clients who request very particular circumstances for their air,” De Watts explains in a video on the company’s website.

“Sometimes we’ll be at the top of a mountain, other times the bottom of a valley.” 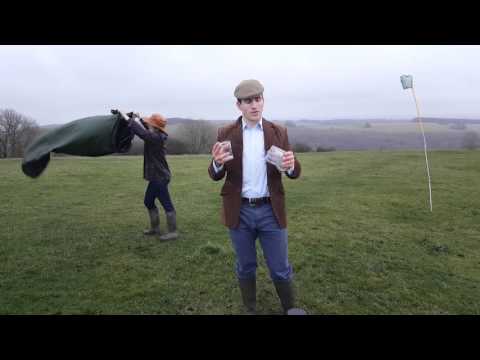 Once opened, a jar of pure British air might last just a few seconds, and it’s understood many customers are purchasing the product more as a novelty gift that will sit in homes unopened.

De Watts, originally from Dorset on the southern coast of England, now lives in Hong Kong where he can be found selling his bottles of fresh air at local street markets.

The businessman appears to have chosen his market wisely. In December, Beijing issued its first ever red alert because of poor air quality, closing schools and restricting traffic.

Back in Britain, De Watts’ team of air farmers continue harvesting away from roads which might pollute the precious produce.

Funnily enough, for those dismissing the unusual business model as just a bunch of hot air, it is in fact Britain’s “cool air” which gives buyers the most bang for their buck.

“The colder air means we can fit more in the container,” De Watts said. “When it’s warmer, we can’t fit quite as much in.”

The colder air means we can fit more in the container

Aethaer follows in the footsteps of the Canadian company Vitality Air, which recently started selling canisters of fresh air from the Rocky Mountains to Chinese buyers.

Though at between $14 and $20 per canister, Canadian air seemingly costs a fraction of British breeze.

This week, Beijing issued its first red alert for hazardous pollution, closing schools, restricting traffic and shutting construction sites. Residents tell CNN what it's like to live in the smog-cloaked city.

Beijing smog: What's it like to breathe the air?