Editor’s Note: Kelly Wallace is CNN’s digital correspondent and editor-at-large covering family, career and life. Read her other columns and follow her reports at CNN Parents and on Twitter @kellywallacetv.

Looking back, Mattis Collier, now 20 and a junior at the University of South Carolina, can see all the warning signs.

“It was a very quick relationship. I didn’t know him very well … but the jealousy, the rage, all of that stuff came pretty soon after,” said Collier about her ex-boyfriend, whom she started dating early in high school.

There was so much isolation, she says, remembering how he went through her phone one time, deleting all of her male friends in her contacts and on Facebook, and how he told her she couldn’t talk to guys or go to parties.

Reluctant to get too specific, she says the relationship was abusive in multiple ways. Ultimately, she cut off communication with him after she started college.

“I was very blind to the situation, and you know, when it’s your first love and all of that, you really think that that kind of thing is, ‘Oh it won’t happen again,’ or ‘He was just so mad,’ or ‘I lied to him so I deserved that,’ but it progressively got worse.”

Yeardley Love was beaten to death by her ex-boyfriend in 2010.
Courtesy One Love Foundation

This summer, Collier’s father wore a “One Love” baseball cap to support the One Love Foundation – an organization created in honor of Yeardley Love, the University of Virginia lacrosse player who was beaten to death by her ex-boyfriend just three weeks before she would have graduated in May 2010.

Collier’s father encouraged her to check out the foundation. “I think that was his way of saying, ‘I’m wearing this hat in honor of a girl that was not as lucky as you.’”

So one night she went up to her room and looked up every news article and video she could find about One Love, and made a decision to create a campus organization called Team One Love at her college this past fall. “I was like, ‘OK, if I don’t do this for anyone else, I’m going to do it for myself.’”

Mattis Collier's sign says, "I will never let you go even when you want to. #ThatsNotLove"
Courtesy Mattis Collier

There are now 40 active Team One Loves on college campuses across the country and nearly 6,000 Team One Love members. The goal is for the students to take the lead in educating and empowering their peers about the signs and dangers of relationship abuse. It’s all part of a #ThatsNotLove campaign that One Love Foundation officially launched back in October.

‘Every kid has a stake in solving this problem’

But this goes way beyond a campaign. The One Love Foundation hopes #ThatsNotLove starts a movement.

To drill that point home and get to teens and college students where they are – on social media – One Love worked with an outside agency to create “couplets,” eight digital shorts featuring animated emojis, which in a very clear-cut way indicate how intensity, obsession, isolation, disrespect, blame, control, anger and put-downs are most definitely not love. 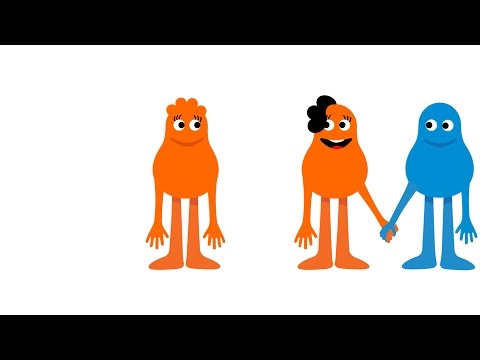 Since the couplets were launched this month in honor of Teen Dating Violence Awareness and Protection Month, they have been viewed nearly 5 million times and counting, according to One Love.

“They demonstrate exactly what we’re trying to say with ‘That’s not love,’ but they do it a lighthearted way,” said Sharon Love, Yeardley’s mother and the founder of the One Love Foundation. “They’re not threatening. They’re very simple but they bring the point home directly.”

Added Lexie Love Hodges, Yeardley’s sister: “They can capture a whole relationship in five seconds.” People don’t always recognize relationship abuse when they read an article about it or listen to someone talk about it, she said, but here they can see the behavior demonstrated in a way they might click with.

“The topic of relationship violence is so heavy. I think that’s why it’s not talked about often and I think that the couplets … make it more approachable for friends to bring it up in a different way,” she said.

In addition to the digital shorts, two public service announcements also titled “That’s Not Love” have been released, and have been viewed more than 5 million times on Facebook and YouTube since October.

#ThatsNotLove campaign | Because I Love You - Delete | One Love Foundation 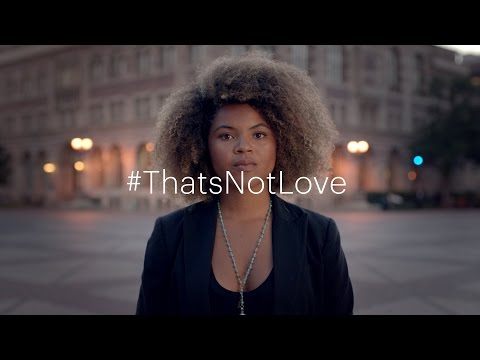 ‘We were so clueless’

Relationship abuse is an issue that was never discussed in her household, Sharon Love said during a phone interview from her home in Baltimore.

“We were so clueless,” she said, adding that she and her family knew nothing about it and didn’t feel like it was a topic they needed to be concerned about either. “We didn’t realize there were signs, and we’re trying to turn that upside down. … The signs are somewhat obvious but they’re masked as love. You can think that they’re madly in love with you when they’re really just trying to control you.”

Love said she also had no idea about the statistics – how one in three women and one in four men will experience some form of physical violence in a relationship in their lifetime, according to the National Coalition Against Domestic Violence, and how young women 16 to 24 experience the highest rate of domestic partner violence – nearly three times the national average.

“I feel like what we thought of domestic violence was of someone that was married with children, that was stuck in a situation, that was dependent on the abuser and couldn’t get out,” said Love, saying what came to mind was Farrah Fawcett’s portrayal in the movie about domestic violence, “The Burning Bed.”

“That was like stuck in my head. That’s what relationship violence is,” she said.

It didn’t ever occur to her that relationship abuse could impact young people, let alone that young women in Yeardley’s age group were at the highest risk.

On May 3, 2010, when Yeardley was just 22 and weeks away from her college graduation, Sharon Love awoke to police officers at her front door. Life as she and her family knew it was completely over.

“It was incomprehensible to me that someone I knew, someone that Yeardley cared for, had taken her life,” she wrote last year in a letter posted on the One Love Foundation website. (Yeardley Love’s ex-boyfriend George Huguely was convicted of murder and is currently behind bars.)

The MADD for relationship abuse?

Determined to raise awareness among teens and help them recognize the warning signs of abusive relationships, Sharon Love started the foundation in the hopes of doing for relationship abuse what Mothers Against Drunk Driving has done for drinking and driving.

“They changed a whole mentality, with generations now thinking it’s appalling to drink and drive. My generation didn’t think anything of it,” she said. “So we’re hoping that relationship violence will be appalling behavior and something that you speak up against right away.”

The foundation created a film called “Escalation,” which showcases a fictional relationship between two students, Paige and Chase, that starts to turn very wrong, very quickly. In the film, Chase wants to be with Paige all the time, gets jealous when she spends time with men, begins to isolate her from her friends and grows increasingly more angry and violent as she starts to pull away. The film has a tragic ending and concludes with photos of young women who in real life were killed by their abusive partners.

I watched the film last year as it was being rolled out on college campuses around the country. It left me shaken and so upset. I watched it again before writing this piece and feel exactly the same way.

Teens trained to spot drama before it turns dangerous

So far, the film – along with a 45-minute workshop led by student facilitators – has been shown nearly 700 times at colleges and high schools across the country, with nearly 35,000 students participating. According to Hood of One Love, nearly 90% of students who participated in workshops said they thought it should be required viewing at their school, and 97% said they would recommend it to a friend even if it wasn’t required.

The goal, an ambitious one, is to have 100% of students on every campus in the U.S. see the film and participate in a workshop, said Hood.

“Because movement is our goal, we just want as many eyeballs to see it as possible,” she said. “We now think that if ultimately we want to change the social climate on campuses, so that people can speak up when they see things, then it can’t just be a pocket of kids that see it. It has to be many, many more.”

I wondered why One Love wouldn’t just release the film on YouTube and allow teens across the country and around the world to see it. Hood said there are two reasons. First, it could be triggering for someone who is an abusive relationship, she said, and you would want to make sure there were resources available or you could communicate to that person what resources are available when they watched it. And second, she said, while the film is powerful, the workshops are more powerful.

“You walk in, you think this has nothing to do with you. And in 38 minutes, which is the length of the film … you’re sort of rocketed to not only understanding the issue, being more aware of it, you recognize that you’ve seen it before,” said Hood. “You have a connection to it.”

Because ultimately, that’s part of the sad reality of relationship abuse. We all most likely know someone who has experienced this.

“It doesn’t discriminate. It’s not just poor people. It’s not just people without fathers or mothers or guidance. It’s everybody. It’s your sorority sister. It’s your friend. It’s your sibling. It’s your child,” said Mattis Collier, who hopes to be able to work with One Love after her graduation in December and then go to law school to work on the issue of domestic violence in college athletics.

Showing people they have a role to play

Collier wishes the “Escalation” workshop were required at her high school and college. Right now, just over 40 schools require it with a subset of students, including athletic teams, fraternities and sororities, and freshmen, according to One Love.

“I wish that this was a required seminar for high school, for college students, because the lack of knowledge and education awareness in our country is astounding,” said Collier.

As One Love looks to the future, it hopes not only to increase the number of schools where “Escalation” workshops are held and also increase the number of schools where they are required, but also to deepen the engagement of students, with more Team One Loves – more students like Collier facilitating workshops, training students to be workshop facilitators and holding “That’s Not Love” events where they write words on sheets to match what love is and what it is not.

“It may sound crazy to have these ambitious goals about starting a movement and getting to 100% of the kids on college campuses,” said Hood, “but it’s sort of pretty simple what we’re trying to do. We’re trying to just wake people up to their personal connection and get them to develop their voice and understanding that they have a role to play.”

What drives Sharon Love and the rest of her family is trying to prevent what happened to Yeardley from happening to any other young person in a relationship.

“I feel pretty confident already that we are saving lives,” she said. “We’ve gotten so many letters from so many people that have gotten out of a bad situation, and really just one of those letters makes it all worthwhile.”