How a smartphone app can cure blindness in poor countries

By Katie Pisa, for CNN
Updated 8:16 AM EDT, Thu July 14, 2016
Link Copied!
A smartphone app developed by Peek Vision (Portable Eye Examination Kit) has been used in Kenya, Botswana and India to test patients who would otherwise find getting proper eye care difficult.
Courtesy Peek
There are 39 million blind people in the world, and in low-income countries, 80% of blindness is curable, notes Dr. Andrew Bastawrous, an eye surgeon that helped develop the app.
Courtesy Peek
Cataracts and refractive errors are the two most common problems in poorer countries notes Bastawrous, who has trained local examiners in remote areas of Kenya on the new technology.
Courtesy Peek
21,000 school children were screened in Kenya, with successful results. Another round of screening has just started for another 300,000 students to be tested in Kenya.
Courtesy Peek
Examiners show an "E" to those being tested, and the patient points the way the letter is facing. It's simple, but has had very accurate results, according to a JAMA Opthamology report.
Courtesy Peek
For tests done in schools, parents are sent text messages with their child's results and then told if follow-up is needed.
Courtesy Peek
"We find a local champion," says Dr. Bastawrous, who stresses how important the people on the ground are to his team's mission. Often a village leader is trained in order to reach those in need.
Courtesy Peek
Peek's technology helps to detect cataracts, glaucoma, macular degeneration, diabetic retinopathy and signs of nerve disease. It can also pick up other health problems including severe high blood pressure and diabetes.

A cure for blindness, in your smartphone

In 2012, London eye surgeon Dr. Andrew Bastawrous gave up his job and comfortable life in the capital, sold everything he and his family owned, and moved with his wife and one-year old baby to Kenya to start 100 temporary eye clinics.

His idea – turning a smartphone into an eye examination tool – was already a couple years in the making. Prior travels abroad to developing countries doing eye tests propelled Bastawrous to want to help those with common vision problems but little access to eye care and health equipment.

There are 39 million blind people globally, and in low-income countries, 80% of blindness is curable.

The two main causes of eye problems, he notes, are cataracts and refractive errors.

“The majority is reversible. People who have been blind for decades, with help, can see again,” he notes.

With this concept in mind, Bastawrous and his team developed Portable Eye Examination Kit (Peek). Trialing the technology, Bastawrous’ team screened 21,000 Kenyan children in 9 days, and will now begin screening another 300,000 in Trans-Nzoia, a rural farming community in eastern Kenya.

A solution to a big problem

“We continually found in many of these villages, where it’s uncommon to have electricity and roads, there would be as many as 200 waiting when we arrived,” says Bastawrous.

“The harder it is to get to a place, the more people we’d find were there. Clearly, it’s a problem,” he added.

Peek is supported by a mix of prize money, crowdfunding, academic grants and the Queen Elizabeth Diamond Jubilee Trust. The non-profit organization has survived thanks to pro bono work from doctors and developers, and support from different universities

In Sub-Saharan Africa, more people have access to mobile phones than running water, so it made perfect sense to develop screenings through the smartphone, explains Bastawrous, who started his Kenyan work with $150,000 in equipment and a team of 15 people.

With the Peek app test, the letter “E” is shown on a phone’s screen with different orientations. The patient points in the direction they see the letter facing and the examiner swipes in that direction. The results are immediately available after the test, and patients (or their parents and school in the case of children) receive a text message recommending further treatment if necessary. 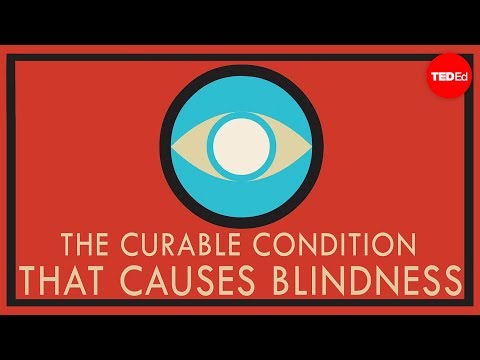 Another feature is a piece of hardware called Peek Retina, which clips on over a smartphone’s camera and can be cheaply made with a 3D printer. Used together with the Peek app, the phone is held close to the eye and will auto-focus to show the test taker’s retina on the screen.

This device is able to see cataracts clearly, detect signs of glaucoma, macular degeneration, diabetic retinopathy and signs of nerve disease. With a clear view of the retina, it can also detect other health problems including severe high blood pressure and diabetes.

The app can replace traditional hospital equipment, which is often bulky, expensive and fragile. Building up local teams, Bastawrous has also worked with village leaders to train examiners at a low cost.

Having just turned 36, Bastawrous was named one of the World Economic Forum’s Young Global Leaders in 2015 and has already helped restore eyesight to thousands of those in need.

While the technology behind the testing is key, Bastawrous says it’s just part of the solution:

“Smartphones and technology will not cure blindness. It’s a lot of people working on the ground,” he explains. Those people include software developers, teachers, other doctors, local village leaders and many more who have no doubt made the work possible.

“The potential is huge,” adds Bastawrous, who hopes that others working on similar start ups will also be keen to help as it’s an endemic problem the world over.