A YouTube video appeared over the weekend of Duterte joking about the 1989 rape and murder of an Australian missionary that took place in Davao City, in the country’s southeast, where he is mayor, CNN Philippines reported.

“I was angry she was raped, yes that was one thing. But she was so beautiful, I think the mayor should have been first. What a waste,” he said, according to a CNN Philippines translation of the comments, which appeared in a YouTube video over the weekend. 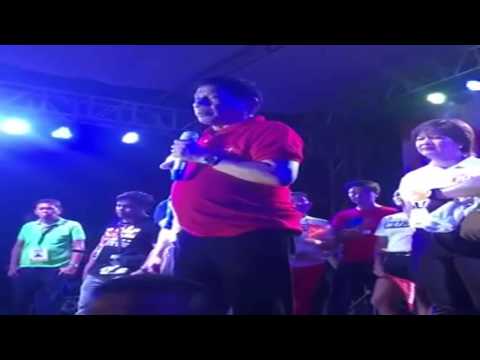 He had made the comments during a campaign rally on April 12. And for days, Duterte balked at calls to apologize for his rape comments.

He told reporters Sunday that what he said was “gutter language” expressed in anger but declined to apologize for the “rape statement.”

“If it brings me down, let it bring me down. If it brings me up to the presidency, then well and good. I will serve you but I will not as a matter of honor apologize for (it),” he told reporters.

Duterte’s initial comments referred to an incident at Davao City jail during his first term as mayor when inmates took 15 church workers hostage – including the Australian lay minister. The Australian embassy in the country was critical of his comments on Facebook: “Rape and murder should never be joked about or trivialized.”

His comments drew heated criticism from other hopefuls in the upcoming May 9 presidential election, which one recent poll tipped him to win.

Jejomar Binay, current vice president and presidential candidate, said that Duterte didn’t deserve to be elected to the country’s top job: “Rape and murder of a woman is not funny at all. Mister Duterte, don’t you have a mother? Don’t you have daughters? Your statement is simply revolting.”

You are a crazy maniac who doesn't respect women and doesn't deserve to be president.

Known for being outspoken, it’s not the first time Duterte has made inflammatory statements. He has pledged to execute more than 100,000 criminals if he’s elected, according to local media.

Known for being outspoken, it’s not the first time Duterte has made inflammatory statements. He has pledged to execute more than 100,000 criminals if he’s elected, according to local media.

Manuel Roxas, another of the five candidates for the presidency, said that rape is a serious problem and “anyone who laughs at the ultimate assault on the dignity of women should not be allowed to wield power,” CNN Philippines reported.

Senator Grace Poe, Duterte’s closest rival in the election, said it was unacceptable.

As a woman, I am taking a stand against rape and abuse of all kind https://t.co/6LVPHmf3r8 RT pic.twitter.com/qrehaq1Ea8

“No one, whoever she is and whatever her looks may be, deserves to be raped and abused. Rape is a crime and no laughing matter. We should all be outraged at abuses against women.”