Abigail Kopf winces, nuzzling the side of her head into her Batman pillow. She needs relief.

“My head itches,” Abbie moans, her voice reaching the familiar whine of a 14-year-old girl.

“I know, honey.” Vickie’s voice softens, weary with repetition. She straightens the black cap on her daughter’s head, trying to cover the upper right section of Abbie’s brain and skull that’s completely missing.

Two months ago, a bullet pierced Abbie’s head. The shot was fired at close range by a gunman in Kalamazoo, Michigan.

Abbie is a slight girl weighing less than 100 pounds. The Kopfs have no clear understanding of why she survived, and even less of an understanding of how she can talk to them and remember so much so clearly.

Her husband, Gene, is more blunt: “Sheer dumb luck. The path of the bullet. It was cold that night. She was near a trauma center. A lot of dumb luck there. Fortunately, she’s here.”

A night of terror

Abbie had big plans for Saturday, February 20. “Grandma Barb” was taking her to a local theater performance.

Barbara Hawthorne wasn’t Abbie’s biological grandmother, but she was so close with the Kopfs that Abbie called her Grandma Barb. The 14-year-old and 68-year-old shared qualities that made them feel related: infectious smiles, easy laughs and a gift at giving the sort of hugs that changed anyone’s outlook on the day.

Barbara Hawthorne was so close to Abbie that the teen called her Grandma.
From Facebook

Grandma Barb invited Abbie to be the only kid joining her group of friends – Mary Lou Nye, 62, her relative Mary Jo Nye, 60, and Dorothy Brown, 74. They were going to a live performance at Miller Auditorium in Kalamazoo.

Abbie would be out on the town, just like the adults, without her parents. Even better, Grandma Barb and her friends wanted to grab a late dinner at Cracker Barrel with their young cohort.

Jason Brian Dalton, 45, was an Uber driver. He had picked up fares throughout the night, allegedly carrying a semi-automatic handgun in his car. In between rides, prosecutors say he was on a random, murderous rampage.

At 5:42 p.m., the first shooting report came in to Michigan State Police. Tiana Carruthers, 25, was shot four times in an apartment complex. She would survive, and shielded her three children from the bullets.

How Kalamazoo shooting suspect was captured

Four hours later, a father and son, Richard Smith, 53, and Tyler Smith, 17, were shot and killed while they looked at cars at a dealership.

At 10:24 p.m., Grandma Barb, Abbie and thier friends sat in two cars, a Chevrolet Cruze and an Oldsmobile minivan at the Cracker Barrel. Abbie isn’t sure if she remembers the shooting or if the memories are reconstructed from news reports. She knows she still flinches when she hears loud sounds.

The bullet struck Abbie as she sat next to Grandma Barb, piercing her skull and frontal lobe of her brain. Barbara Hawthorne and all her friends died from their gunshot wounds.

Dalton has been charged with six counts of murder, and last week was deemed competent to stand trial. He has not yet entered a plea.

Horror, then a squeeze of the hand

Vickie and Gene Kopf rarely worried when Grandma Barb took Abbie on an outing. They were simply grateful their daughter wanted to spend so much time with senior citizens, instead of finding the trouble common among teenagers.

“Hello?” Vickie said, the phone ringing. It was her aunt.

“Are you watching the news?” she asked.

“You might want to. There’s a crazy person shooting people in Kalamazoo. Have you heard from Abbie?”

Vickie looked at the time. It was past the time Barbara said she’d call.

As the dread began to rise, Vickie’s phone rang. It was Bronson Methodist Hospital asking if she was the parent of an Abigail Kopf.

Gene Kopf drove 90 mph to the hospital in Kalamazoo, running every light he could. Vickie ran out of the car at the emergency room, racing in to find a doctor.

The doctor dragged her into the elevator as Gene ran in behind her.

“How bad?” Vickie managed to ask, urging the elevator to move faster.

“Where was she shot?” Vickie asked.

“In the head,” warned the doctor.

No parent would want to see their kid like that.

Vickie remembers walking into the room but she can’t explain in words what she saw.

She closes her eyes as she shakes her head, as if pleading for the memory to leave her. “It was horrific to see. A sight nobody would want to see.” Vickie pauses, a tear falling down her cheek. “No parent would want to see their kid like that.”

Doctors swarmed around the critically injured girl. The Kopfs remember a tornado of medical work around them and doctors giving them instructions. After seeing her daughter, Vickie doesn’t remember much, except laying her head on her daughter’s chest and crying.

Six hours later, Vickie was still uttering those words, next to her daughter’s bedside. Doctors were in the middle of neurological tests, believing the teen was brain dead.

The nurse encouraged Vickie to keep talking to her daughter, saying medical research has shown the patient’s hearing would be the last to go.

Vickie was holding her daughter’s hand, still talking. “If you can hear me, Abbie, if you’re in there, give me a sign,” she kept whispering.

Vickie jumped back, startled. Did she imagine it? The nurse said bodies after trauma often flinch.

“Abbie, can you hear me? Do that again!” Vickie pleaded.

Abbie’s fingers, thin and pale, moved, then intertwined with her mother’s fingers. More forcefully, Abbie began smacking her mother’s hand. Vickie thought Abbie was using her thumb to try to draw the letter “B” for Grandma Barb.

Abbie now sleeps on the couch. Her parents sleep by her side.
Lorenza Brascia/CNN

A long road to recovery

Earlier this month, Abbie gripped the bars as she stepped forward at Mary Free Bed Rehabilitation Hospital in Grand Rapids. She did little to hide the frustration as she put one foot forward again and again for eight hours of rehab a day. Abbie was impatient. She wanted to get back to her favorite sport, gymnastics, and flip off the uneven bars.

That she was walking at all astonished her doctors. 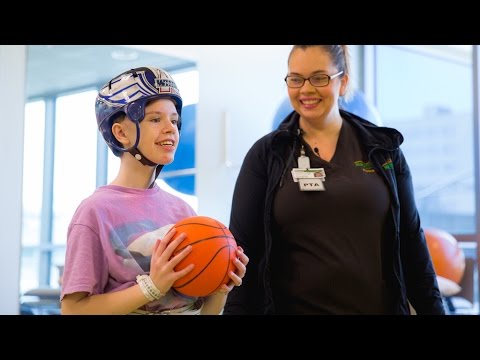 “She has made remarkable progress,” said Dr. A.J. Rush, a pediatric psychiatrist who led her care at Mary Free Bed Rehabilitation Hospital. “I expect Abbie will continue to improve with intensive outpatient therapy,” added Rush, who will continue to oversee her care.

Abbie returned home from the rehab facility for the first time last week. Her prognosis isn’t clear. At age 14, Abbie’s skull isn’t as strong as an adult’s skull so she’s more vulnerable to injury. The bullet struck her in the frontal lobe, a part of the brain that controls eye and body movement, motor function, language, emotions, personality and judgment. Abbie’s injury will likely result in delays and deficits that may not be clear until later in her life. The frontal lobe finishes development at around age 16.

Abbie will have surgery on May 13. Her parents say a 3-D printer will form a new skull for Abbie, although bone and bullet fragments will remain in her brain.

Abbie still smiles easily and brightly for strangers, but the smiles mask a number of constant, painful remnants. Abbie’s Batman pillow has a speaker tucked behind it, so music soothes a splitting, ever-persistent migraine. The migraines are so powerful she vomits from the pain.

Doctor’s appointments and physical therapy are scheduled daily, her family racing from one to the next. Abbie suffers from post-traumatic stress disorder, a horror that remains in check from medication she dutifully takes from her parents, now both her full-time nurses.

Gene, who worked in IT and was working on his master’s degree, quit his job to care for his daughter, who now needs 24-hour care. Their girl who used to run upstairs to her bedroom now sleeps on a couch in the living room, unable to walk up the stairs without significant struggle. Her parents sleep on the couch with her, ready to jump up to help her to the bathroom or fetch water.

Doctors tell the Kopfs to start saving now for medical expenses down the road. They wonder how, given that there’s no income coming in. Even though insurance has covered the bulk of the expenses, much remains unpaid. Fear of financial ruin is exceeded only by the concern over their daughter’s health and future.

The Kopfs say donations have kept them afloat, mainly from a GoFundMe account set up for their daughter’s medical bills. They try to communicate with donors through a Facebook page and Twitter account, posting her remarkable progress.

Gene said he’s not angry, but he often feels overcome by helplessness. Kopf channeled that sentiment by asking a question to candidates Hillary Clinton and Bernie Sanders at a CNN Democratic debate last month. He asked about the mass shootings, including the one that injured his daughter, and what the candidates planned to do to address such violence.

“I don’t want to hear anything about tougher laws for mental health or criminal backgrounds, because that doesn’t work,” he said to applause.

Kopf didn’t care about their answers. He was asking the question to parents watching the debate. “What I’m hoping to gain is, I’m rubbing everyone’s nose into the problem because it seems that we as a country keep sweeping it under. Something’s gotta be done about it. Either we’re insane as a society or there’s something in our gun policies. I’m not saying I got a magical fix. I’m just saying in order to fix the problem, you first have to address it.”

“I want to be a marine biologist,” Abbie says. She’s propped up on her couch with three stuffed animals: Sharkie, Sharkie #2 and Cutie Pie. Her parents don’t dissuade her from dreaming about diving in the sea examining ocean life.

“If anyone can do it, this little girl can,” says Vickie.

Brandon Griggs and Jack Hannah contributed to this report.