Bryn Thomas, a 17-year-old with nonverbal autism, had an unusual drug reaction for two years

Music helps Bryn stay calm, and he and his mother recorded a song to help inspire people in similar situations

One day in 2013, young Bryn Thomas suddenly became very sick. He was pale, anxious, shaking and pacing. For almost two years, his doctors and parents couldn’t figure out what was happening to him. And even worse, Bryn was unable to tell them.

Bryn, now 17, has nonverbal autism and cerebral palsy. He was born at 34 weeks of pregnancy, and by the time he was 18 months old, his mother, Millie Thomas, knew that something was wrong.

Millie, a dermatologist, said her son struggled a lot with communication. She and husband Terrig, a scientist at the Food and Drug Administration, tried using different methods, such as sign language, and eventually they were able to incorporate iPads and tap-to-speak technology.

Bryn started taking Prozac in 2011 to help him communicate more effectively and decrease his anxiety. When he first started taking the drug, Millie said, it changed their life. As Bryn got older, his doctors increased the dose gradually, going from 10 milligrams a day to alternating 20 milligrams and 40 milligrams. But on October 5, 2013, he got sick, and he struggled to communicate his distress.

“We didn’t know what it was with this sudden offset strange behavior of Bryn pacing, and the best way we could describe it was, he was like a tiger in a cage,” said Millie, whose family lives in Arlington, Virginia. “It was all of a sudden, like a switch flipped.”

Centers for Disease Control and Prevention

For almost two years, Bryn experienced weight loss, chronic diarrhea, sweating, shaking and pacing. Millie took her son to doctor after doctor, but no one could pinpoint the cause of all his symptoms.

Millie and Bryn’s teacher, Annie Vincent, spoke every day in an effort to figure out why he was so sick. Finally, on Wikipedia, Vincent read about a condition called akathisia, a disorder of distress and restlessness sometimes caused by antipsychotic and antidepressant medications.

“It turned out it was a weird drug reaction where too much made him restless and feel like things were crawling inside, while too little drug made him dark and sad,” Millie said. “I think that would have been hard to describe for anyone, regardless of speech.”

Once his doctors and parents understood how the drug was affecting Bryn, they adjusted his dosage back to 10 milligrams. He still takes it, but they’re careful to maintain a balance to help him communicate more effectively.

Despite her background as a physician, Millie was initially unable to understand the source of her son’s illness. In a moment of frustration and desperation, she wrote “Bryn’s Song: The Puzzle” to reflect the puzzling nature of his condition.

Eileen Walters sorts through some of the toys typically given to soothe children with special needs.
Francis Ying

“It was a moment in time when we had great despair, and he was unable to communicate,” Millie said. “Not being able to have those extra words to guide us, we were at a loss. It took us so long to realize it was a drug reaction, and that’s when I wrote the song.”

She wrote the lyrics, and friend Michael Fath set them to music.

Terrig had encouraged Bryn to play the harmonica after noticing how much calmer it made him, and music helped Bryn through his illness. When he got better, Millie and Bryn formed a band called Mystery-T and recorded the song to raise money to get a therapy dog from Canine Partners for Life, an organization that pairs children and adults with autism with trained home companion dogs.

The family wants a therapy dog to help Bryn stay calm enough to communicate if he becomes distressed or sick again.

But they also recorded the song to help the lives of others who are experiencing similar situations.

“This song started as an outpouring of frustration, but the song evolved into contributing to something larger than ourselves, which is trying to help other people,” said Millie. “I feel like every negative experience always has a positive somewhere; you just have to find it. We thought this was a great song that would touch anybody who had something in their life that they can’t communicate.”

When they recorded the song, Bryn played his own instruments to create the backtrack. His favorite instrument is the harmonica, but he also played the whizzer whistle, tambourine, guitar and rain stick.

Nonverbal Autistic Boy Plays in a Rock and Roll Band! 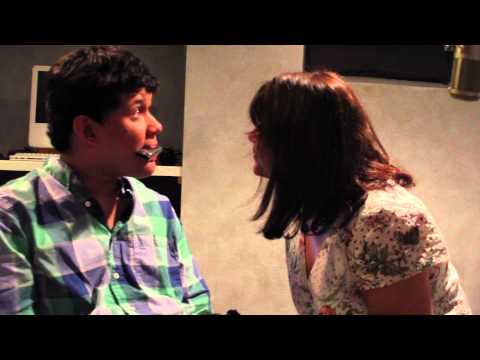 Recording the song has had a major impact on Bryn, Millie said.

Should all young children be screened for autism?

“His self-esteem has improved by him having contributed something to the rest of the world that is completely beyond himself,” she said. “You can’t put a price on self-esteem. Your worth is what you contribute and what you give; your worth isn’t just what you take. And Bryn has been able to give, and I think giving a special-needs child the opportunity to give something back is huge.”

Millie said that creating this song was all about taking a negative in their lives and turning it into a strong positive. She has the same optimistic attitude about being the mother of a child with nonverbal autism.

“Autism is not a tragedy. Running out of bacon is a tragedy,” said Millie. “Children with autism are often perceived as having limits, but the honest truth is, they could do lots of things. They are not going to be gentle giants or super geniuses. They have mediocre talents and superb talents, and they are complicated just like the rest of us.”

Millie believes that everything happens for a reason, and Bryn’s “medical mystery” gave them the opportunity to help others.

“Music saved our lives,” she said. “It’s a story of resilience. We didn’t quit. We kept searching. You have to go through something in life to come out on the other side and see the good. Once we had an answer, we took all that bad energy and put it into something really positive and tried to make a difference. I’m just through the moon to have Bryn do something really positive. He’s satisfied. He doesn’t need anything more.”