The superpowered secret to get kids to eat veggies

By Jacqueline Howard, CNN
Updated 12:33 PM EDT, Tue July 5, 2016
Link Copied!
Ad Feedback
Is your school serving these award-winning recipes? —
Local chefs teamed up with school nutritionists, kids, parents and other interested community members to brainstorm, create and test healthy recipes that were designed to make a better school lunch. They entered those recipes into a national Recipes for Healthy Kids competition, part of first lady Michelle Obama's Let's Move initiative. While it all happened back in 2010, those winning recipes are still just as tasty -- and nutritious -- today. Even if your local school is not including these healthy choices in their lunch menus -- and they probably should -- you can make them part of your back-to-school meal choices. We've included a link on every picture to the full recipe.
USDA
1ST PLACE VEGGIE WINNER: HARVEST BAKE —
CLICK HERE FOR FULL RECIPE
An unusual combo of butternut squash and granola looks good enough to eat anytime of the day. Winning first place in the green and orange veggie division, Harvest Bake is the brainchild of Chef Bryan Ehrenholm and the kids from Joshua Cowell Elementary School in Manteca, California.
USDA
GRAND PRIZE WINNER: PORCUPINE SLIDERS —
CLICK HERE FOR FULL RECIPE

Studies show kids like to eat food with fun names, but this grand prize winner is as nutritious as it is tasty and fun to say. The recipe for Porcupine Sliders was dreamed up by Chef Todd Bolton and students, community members and school professionals from the South Education Center Alternative School in Richfield, Minnesota.
USDA
GREEN RICE, EGGS AND HAM —
CLICK HERE FOR FULL RECIPE
Dr. Seuss would be thrilled to see his work applied to a tasty and nutritious choice that won a place in the top 30 recipes. Green Rice, Eggs and Ham was submitted by Chef Andrea Reusing and students,community members and school professionals from McDougle Elementary School and Culbreth Middle School in Chapel Hill, North Carolina.
USDA
OODLES OF NOODLES —
CLICK HERE FOR FULL RECIPE
Kids love oodles of noodles, so this top recipe is a perfect choice for a healthy lunch or dinner. It was submitted by Chef Patsy Bentivegna and kid testers from Lincoln Junior High School in Skokie, Illinois.
USDA
TASTY TOTS —
CLICK HERE FOR FULL RECIPE
This nontraditional version of a kid favorite, tater tots, uses chickpeas and sweet potatoes to pack a tasty tot punch, and it's oven fried! Chef Rodney Poles from the "Chefs Move to Schools" initiative worked with students, community members and school nutritionists from Bellingham Memorial Middle School, in Bellingham, Massachusetts, to come up with this popular choice winner.
USDA
PURPLE POWER BEAN WRAP —
CLICK HERE FOR FULL RECIPE
The power of purple cabbage combines with beans and some great spices to create this vegetarian wrap that's sure to be a packable lunchtime hit. Chef Sue Findlay joined up with students, community members and school nutritionists from Newman Elementary School, in Needham, Massachusetts, to create this winner.
USDA
EAGLE PIZZA —
CLICK HERE FOR FULL RECIPE
The name might be a stretch, but if your kids find it funny and eat it, who cares? This tasty version of a personal pizza comes from Chef Ruth Burrows and the kids from Byars Elementray School in Byars, Oklahoma.
USDA
PEPPY QUINOA —
CLICK HERE FOR FULL RECIPE
A healthy alternative to rice, quinoa is trendy among kids and parents alike. Sartell, Minnesota, Chef Paul Ruszat, as well as kids, parents and school nutritionists from Sartell Middle School teamed up to create this peppy version.
USDA
RAINBOW RICE —
CLICK HERE FOR FULL RECIPE
Almost every color of the rainbow appears in this top winner, along with three different versions of grains. What could be more healthy? This top 30 recipe comes from Chef Patricia D'Alessio and the kiddos from Highland Elementary School in Cheshire, Connecticut.
USDA
SQUISH SQUASH LASAGNA —
CLICK HERE FOR FULL RECIPE
Another great name sure to please the kids--just don't let them try to "squish"it with their hands while it's on the way to their mouths. Chef Jeff Lindemeyer worked hard building this colorful lasagna to please the kids at Liberty Elementary School in Powell, Ohio.
USDA
IT'S SMOKIN'! POWERHOUSE CHILI —
CLICK HERE FOR FULL RECIPE
It could almost be called rainbow chili, there's so many colors and textures in this belly-filling hot lunch, but kids will have fun saying that 'it's smokin'!" Chef Jenny Breen worked hand in hand with kids and parents at Hopkins West Junior High School in Minnetonka, Minnesota, to create this crowd pleaser.
USDA
STIR-FRY FAJITA CHICKEN, SQUASH AND CORN —
CLICK HERE FOR FULL RECIPE
Runner-up for best green and orange veggie recipe is this tasty treat from Chef Paul Gray and the gang at Monument Valley High School in Kayenta, Arizona.
USDA

Apparently, marketing is key to get youngsters to eat more veggies.

Scientists have showed that marketing junk food and sugary drinks in commercials to children directly influences the amount of unhealthy foods those kids consume. But what happens when healthy foods are marketed in the same way?

Branded marketing tactics – from banners to commercials – nearly triple the likelihood of a child choosing to eat vegetables at lunch, according to a study published in the journal Pediatrics on Tuesday.

Why Michelle Obama dances with veggies

“To claim that their overall health will improve is more complicated, but it is a possibility,” he said. “Strategic marketing can have powerful effects on food choices.”

Banners with superhero vegetables were featured on salad bars in schools.
Andrew Hanks

Another approach involved showing short television segments about health education, delivered by the vegetable characters, in the school lunchrooms. The third approach combined the banner with the video segments. A control group experienced no marketing interventions.

The banners combined with the videos, however, resulted in a whopping 239% increase in the number of students who visited the salad bar. So before the marketing, only about 10% of students took vegetables, but after, about 34% did.

Meet the Super Sprowtz! We are transforming the way kids see vegetables. 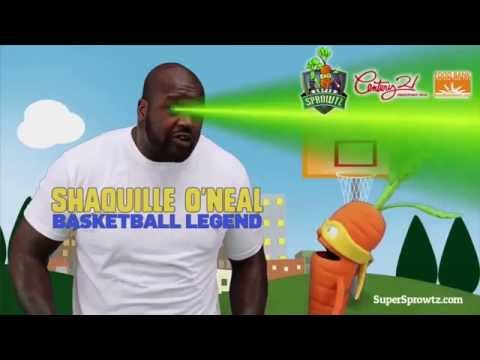 However, the television segments alone did not have a significant impact on students’ eating behaviors, the researchers noted.

“I was surprised to learn that the TV segments weren’t effective,” Hanks said.

In a separate paper, a Canadian research team analyzed how similar marketing strategies for unhealthy foods and beverages can influence children’s eating behaviors. The research was published in the journal Obesity Review on Tuesday.

The researchers identified and reviewed 26 previous studies on children’s food preferences and intake after they were exposed to food and non-food advertisements. In total, the studies included almost 6,000 children ranging in age from 2 to 18.

The researchers also demonstrated that children 8 or younger seemed to be more susceptible to the impact of marketing.

“The findings from this review contribute to the growing body of research suggesting that the marketing of energy-dense, low-nutrition foods and beverages to children contribute to increased consumption of unhealthy calories – an average of 30 calories more during or shortly after exposure to advertisements – which puts children at increased risk for obesity and diet-related diseases later in life,” said the paper’s lead author, Bradley Johnston, director of Systematic Overviews through advancing Research Technology at the Hospital for Sick Children in Toronto and assistant professor at the University of Toronto.

On average, children are exposed to about five food commercials per hour while watching television, according to a 2010 study published in the American Journal of Public Health. The majority of those ads tend to feature unhealthy foods.

To get children to eat more fruit and vegetables, the Centers for Disease Control and Prevention advises parents to set an example by eating healthy foods along with their kids, as well as providing fruit and vegetables as snacks and during celebrations. Also, it helps when children work in gardens and grow their own produce.

However, many researchers are eager to see what would happen if more ads focused on healthy foods.