Not so terrible: Many dinosaurs cooed rather than roared

“Jurassic Park” may have seared the vision of dinosaurs as scary, scaly creatures into many of our minds, but new findings further undermine the terrible lizards’ ferocity.

We already know that most dinosaurs were feathered and brightly-colored like birds. According to researchers at the University of Texas, they probably sounded like them too, mumbling or cooing like doves rather than roaring like lions.

“Looking at the distribution of closed-mouth vocalization in birds that are alive today could tell us how dinosaurs vocalized,” Chad Eliason, co-author of the study in the journal Evolution, said in a statement.

The researchers examined the evolution of bird calls, and made the connection that – as birds were descended from dinosaurs – the ancient creatures likely sounded the same.

The fossil of 195-million-year-old dinosaur Lufengosaurus preserved as found in the ground in Yunnan Province, China. Researchers discovered ancient collagen and protein in one of its ribs.
courtesy Robert Reisz
An artist impression of the Limusaurus. The Ostrich-sized dinosaur was found in Xinjiang in China's far west. Researchers say it lost its teeth as it matured.
Portia Sloan Rollings
An artist's impression of the feathered Tongtianlong limosus or 'mud dragon' dinosaur. A paper on its discovery was published in Nature Scientific Reports on November 10, 2016.
Zhuang Chuang/Nature
Hualianceratops —
The discovery of the hualianceratops, from the same family of dinosaurs as the triceratops, was announced December 9 2015. Its fossils were discovered in the Gobi Desert, western China.
Portia Sloan Rollings
Gigantoraptor —
In 2005, paleotologist Xu Xing and a group Chinese paleontologists excavated the bones of this giant bird-like dinosaur. It's believed to be 8 meters long and weigh 1.4 tons. Its arms were long and legs were bird-like.
Zhao Chuang and Xing Lida
Sinosauropteryx —
Revealed in 1996, this was the very first feathered fossil to be unearthed and offered the first evidence that birds are descended from dinosaurs.
Zhao Chuang
Yutyrannus huali —
At nine meters long and weighing more than 1.4 tonnes, it's the largest feathered animal known to have lived. Named by Xu Xing in 2012, it's been described as a feathered Tyrannosaur.
Brian Choo
Microraptor —
Xu announced the discovery of the four-winged microraptor in 2003 although scientists believe it glided rather than flew -- shedding light on how birds' ancestors learned to fly.
Brian Choo
Zhenyuanlong suni —
This mule-sized, four-winged dinosaur was discovered in Liaoning Province. At two-meters high, it's the largest winged dinosaur found but although its short arms have substantial quill like feathers, researchers think it couldn't fly. It was memorably described by one paleontologist as a "fluffy feathered poodle from hell."
Courtesy Chuang Zhao
Yi qi —
This unusual dinosaur with bat-like wings existed for a very short time 160 million years ago during the Jurassic Period.
Dinostar Co. ltd
Linhenykus —
This parrot-sized species of dinosaur had only finger. It was discovered in Inner Mongolia and named after the city of Linhe.
Julius Csotonyi
Qijianglong —
Paleontologists discovered a 50-ft "dragon" dinosaur species in 2006 in southwestern China's Chongqing. The species is thought to have roamed the earth 160 million years ago in the Late Jurassic period.
Courtesy Zhongda Chuang
Guanlong —
Named by Xu in 2006, this dinosaur, half the size of a man, may have had a coat of primitive feathers.
Zhang Zongda

The researchers said an ostrich’s mating call in a modern example of a large bird’s closed-mouth vocalizations (and anyone who thinks these findings make dinosaurs less frightening has obviously never seen an ostrich fight). 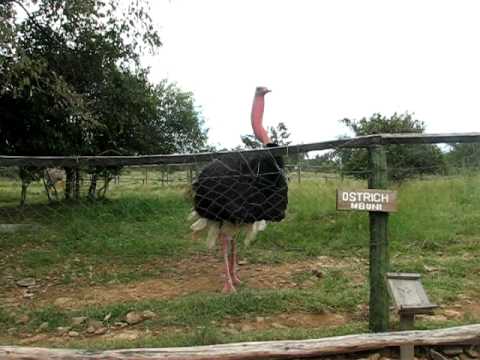 Closed-mouth vocalizations are emitted through the skin in the neck area while the beak is kept closed. The typical dove or pigeon’s coo is an example of this type of sound.

No direct fossil evidence exists to reveal what dinosaurs sounded like, but the researchers say it is likely many made closed-mouthed vocalizations in a manner similar to birds today, perhaps during mating displays.

“To make any kind of sense of what nonavian dinosaurs sounded like, we need to understand how living birds vocalize,” study co-author Julia Clarke said in statement.

“This makes for a very different Jurassic world. Not only were dinosaurs feathered, but they may have had bulging necks and made booming, closed-mouth sounds.”