A Royal Air Force Typhoon -- the same type of fighter jet that carried out the strikes on the ISIS complex.

Two Royal Air Force Typhoons carried out the strikes Monday on one of the terror group's strongholds in Mosul as part of a targeted coalition attack, the ministry said in a statement. 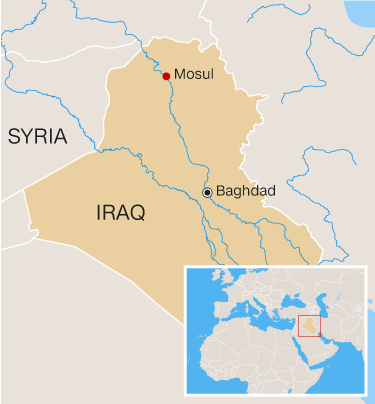 Extensive surveillance showed the palace, close to the Tigris River, contained a training center for foreign recruits and offices dedicated to internal security in the group's so-called caliphate.
The jets were armed with the RAF's largest guided bombs, the Enhanced Paveway III, and first struck the headquarters, then the security center. Initial indications were that the mission was successful.
"Daesh has been losing followers and territory for months, and emphatic strikes like this show that we and the coalition will not waver," UK Defense Secretary Michael Fallon said, using an alternative name for ISIS.
Read More
"Daesh fighters, both foreign and homegrown, can see that they are targets inside this cult."
A still from footage of the strike on an ISIS complex in one of Saddam Hussein's former palaces.
During a visit to RAF Akrotiri, a British air base on the Mediterranean island of Cyprus from which British jets fly daily missions against ISIS, Fallon announced that additional UK troops would deploy to Iraq for the fight against the terror group later this month.
ISIS has steadily lost territory in Iraq and Syria in the past 18 months, including the Iraqi cities of Ramadi, Tikrit and Falluja, while it pursues mass casualty attacks beyond the borders of its so-called caliphate to project power.
ISIS attacks spur dread and anger
Iraq's military is gearing up for an assault to retake Mosul, the largest city under ISIS control.
Terror export fears as ISIS 'caliphate' shrinks