Fleet of drones to deliver blood supplies across Rwanda

From Amazon’s flying delivery service to smuggling drugs over borders, the uses of civilian drones are multiplying fast.

The most valuable application yet may be as a new emergency service in Rwanda for delivering vital medical supplies, starting with blood.

A fleet of 15 drones will soon be buzzing around the vast country, bypassing the sub-standard road network, and making life-saving interventions.

The fixed-wing crafts are the product of Californian start-up Zipline, in partnership with delivery giants UPS and vaccine specialists the Gavi Alliance. The technology is cutting edge, but simple to use, according to Keller Rinaudo, Co-Founder of Zipline.

“(Users) send a text message and they’ll get a text message back saying the Zip has been discharged. They’ll be able to walk outside, see the delivery occur and have what they need to save the patient’s life,” he says.

“The accuracy of each delivery is extremely high and we’re actually able to deliver into their mailbox which is approximately the size of three parking spaces.”

Help from above —
The Zipline drone ejects a blood package that floats to earth on a mini-parachute.
zipline
Ready to launch —
A drone takes off from Zipline's headquarters in Rwanda.
CNN
Lifesaving cargo —
The drones carry vital supplies of blood to remote and inaccessible areas of the country.
CNN
Target locked —
The drones are guided from an iPad programmed with the route map and co-ordinates of the target. The system, designed by delivery giants UPS, is accurate to a target size of three parking spaces.
zipline
Special delivery —
They are collected at their destinations by health workers, who are notified by text of their arrival.
CNN
Embracing innovation —
The nation suffers with a poor road network that makes delivery services unreliable. The Rwandan government has embraced drone technology through favorable legislation, and plans to open the world's first droneport.
AFP/AFP/AFP/Getty Images
The team —
Californian start-up Zipline test their technology in the U.S. before taking it to the field. If the Rwandan project is successful, it will be expanded into new countries.
zipline

Blood drones to the rescue

The drones are controlled from an iPad that is programmed with coordinates and a flight plan, drawing on the delivery expertise of UPS.

When the drone arrives it ejects the payload with rubber bands, to float to earth on a mini parachute.

“We’ve put $800,000 into Zipline and this partnership to develop this service and we’ve invested a lot of our senior staff in terms of their logistics expertise,” says Laura Lane, President of Global Public Affairs at UPS. “We’ve got some of the most sophisticated mapping technologies and we’ve been testing these capabilities and so from our perspective it’s about mapping more of the Rwandan territory and making sure (the blood) gets delivered at that very point it should.”

The demand for such a service in Rwanda is clear, where trauma injuries and avoidable deaths through haemorrhaging after childbirth are relatively common, and the infrastructure for delivering and storing blood supplies is poor. Each delivery is projected to cost between $15 and $30, roughly the same as by motorbike.

The government has enthusiastically embraced drones, with plans for the world’s first droneport are well underway, and new legislation to encourage their use. The Ministry of Health is on board with Zipline’s scheme, and Rinaudo says it is far easier to operate here than at home.

“The nice thing about operating in a small, fast moving country like Rwanda is that they have both a much simpler airspace and they have a small civil aviation authority that can move fast and actually adopt modern regulatory practices sooner than a country like the US,” he says.

The company claims to have raised $18 million to date, with backers including Yahoo founder Jerry Yang and Microsoft Co-founder Paul Allen.

Should the scheme prove successful, it is likely to extend far beyond Rwanda’s borders.

“If it works here in Rwanda, we could take it everywhere,” says Lane. 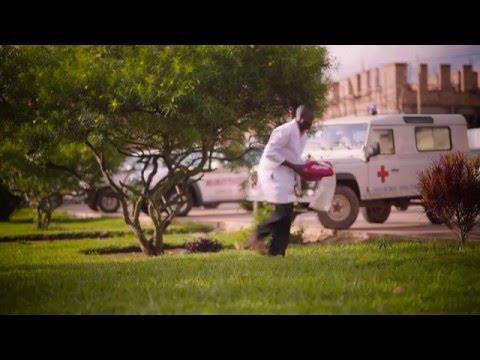