Cocaine pellets removed from a 48-year-old man's stomach after he tried to smuggle them into Australia.

(CNN)Sitting on a nine-hour flight from Thailand to Australia can be uncomfortable at the best of times.

Now imagine doing that with 110 bags of drugs hidden in your digestive tract.
A 48-year-old Australian man smuggling 1.1 kilograms (2.4 pounds) of cocaine in his stomach admitted he was carrying the drugs to police at Sydney Airport, shortly after arriving on a flight from Thailand on September 1.
The man, who lives in Thailand, had passed a baggage examination when he told police he had ingested a large number of packets filled with cocaine. 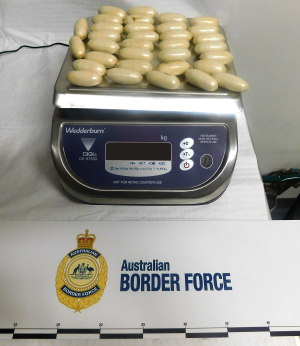 An Australian Federal Police spokeswoman told CNN they were unable to confirm details of the discussion between the man and officials.
Read More
Later, the man passed 46 pellets containing about 460 grams of cocaine (1 pound) after being taken into custody.
Authorities then took the man to hospital, where another 64 were removed.
"Importing drugs internally is extremely dangerous as it can lead to serious health risks and even death," Australian Border Force Organized Crime Branch Acting Commander Lesley Dalton said in a statement.
Dalton said the bizarre incident demonstrated the "dangerous" lengths people go to to smuggle drugs.