The telescope's dish is the size of 30 football fields

More than 9,000 people have been uprooted to make way for huge project

The search for alien life just got bigger. A lot bigger.

The world’s largest telescope will be completed this week in China and it has scientists very, very excited.

With a whopping 1,640 feet (500 meter) wide dish the size of 30 football fields, the telescope will able to detect radio signals – and potentially signs of life – from distant planets.

“China’s latest telescope will be able to look faster and further than past searches for extraterrestrial intelligence,” says Douglas Vakoch, president of METI International, an organization dedicated to detecting alien intelligence.

Cradled in a karst hollow in the mountainous landscape of southwest China, the Five-hundred-meter Aperture Spherical Telescope, or FAST, starts operation September 25.

It’s a process known by astronomers as “first light” – when a telescope opens its eyes and takes its first pictures of the universe.

And FAST is wide eyed: its field of vision is almost twice as big as the Arecibo telescope in Puerto Rico that has been the world’s biggest single aperture telescope for the past 53 years.

Russia’s RATAN-600 telescope is larger than FAST by diameter with panels arranged in a 576 meter wide ring – but it’s not one single dish and its collection area is much smaller than FAST and Arecibo.

Construction of the $185 million mega project began in 2011, with the last of the 4,450 triangular panels that form the dish painstakingly lowered into place in July this year.

While the structure itself is too big to move, each of the panels can be adjusted.

“You can control the surface to point at certain points in the sky. A mesh of steel ropes allows a hydraulic push and pull mechanism,” says Andreas Wicenec, professor of Data Intensive Research at the International Center for Radio Astronomy Research in Australia. 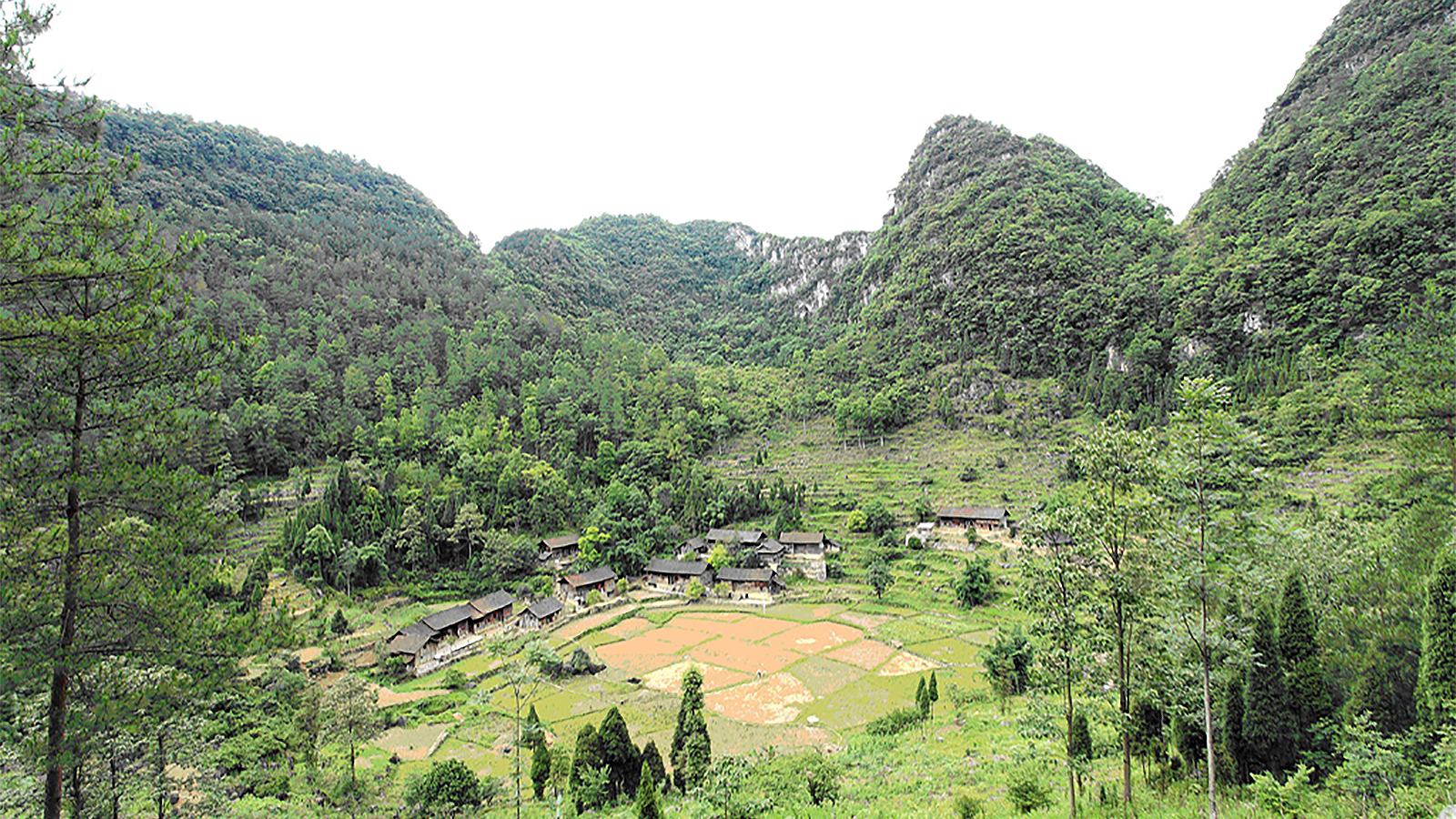 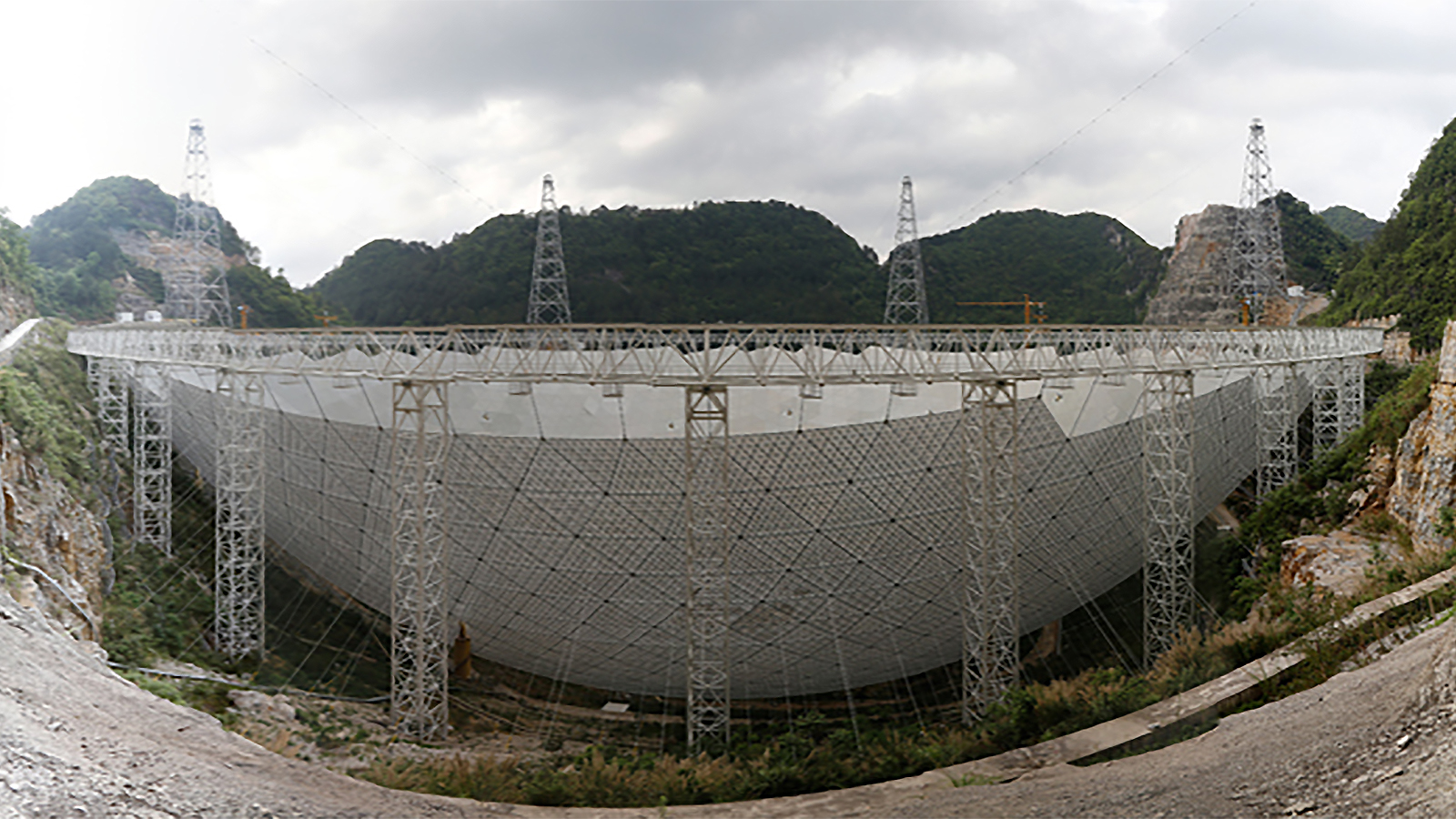 Its remote location in China’s Guizhou province was one of 400 places scientists surveyed over 10 years. The egg-cup shaped valley is perfectly sized and the surrounding mountains provide a shield against radio frequency interference.

It was once home to “Green Water Village” a remote settlement of 12 families that had no electricity. The 65 villagers are among 9,110 that authorities uprooted in order to help improve the telescope’s listening capabilities.

“I never thought the first time I would move would be to make way for a telescope,” former villager Yang Chaolan, 62 told Xinhua, China’s official news agency.

Her son plans to open a restaurant in the town they have been relocated to in the hope the feat of engineering will bring tourists to the poor region.

The telescope is expected to shed light on the origins of the universe by mapping the distribution of hydrogen, the most abundant element in our galaxy and beyond.

“Because of FAST’s incredible sensitivity, it will be able to chart the hydrogen distribution even in far flung galaxies,” says Vakoch.

FAST will also enable scientists to detect many more pulsars – dense, rotating stars that act as cosmic clocks. This could provide scientists with the capability to detect gravitational waves – ripples in space-time – that shed light on how galaxies evolved.

STR/AFP/AFP/Getty Images
An aerial shot of the telescope under construction.

But for many people, the most exciting goal is the search for extraterrestrial life.

The recent discovery of three life-friendly planets outside our solar system has rekindled discussion of whether intelligent life is unique to Earth.

FAST’s sensitivity will be capable of detecting exoplanets like these in ways that other telescopes cannot.

“FAST’s potential to discover an alien civilization will be five to 10 (times) that of current equipment, as it can see farther and darker planets,” Peng Bo, director of the NAO Radio Astronomy Technology Laboratory, told Xinhua.

Last week, Beijing launched the Tiangong-2 space lab – a precursor to a 20 ton space station. It’s also set for its longest crewed mission in October aboard the Shenzhou-11 spacecraft.

Longer term goals include putting a man on the moon and sending a robotic probe to Mars.

The telescope could help track some of these missions, says Wicenec.

However, there are limitations on what the telescope can do. It’s unable to project the trajectories of comets or asteroids for example.

“FAST may help explain the origin of the universe and the structure of the cosmos, but it won’t provide warning of Earth-bound asteroids that could destroy human civilization,” says Vakoch.

China has long been secretive about its military-linked space program, but the scientists CNN spoke to for this piece expected Beijing to be open to international cooperation.

Chinese astronomers are expected to receive priority on the telescope for the two to three years and then it will be opened to scientists worldwide.

“It’s a prestige project but astronomy is very international. China is no exception,” says Wicenec.