The secret life of trees: Is nature less selfish than we think?

Trees share resources through an underground network of fungi

Nature might not be all about a ruthless “survival of the fittest”. Research suggests that trees don’t just compete for survival, but also cooperate and share resources using underground fungi networks.

“A forest has an amazing ability to communicate and behave like a single organism – an ecosystem,” Suzanne Simard, an ecologist at the University of British Columbia, told CNN.

The fungi and the trees are in a mutually beneficial relationship: the fungi cannot photosynthesize, as they have no access to light and no chlorophyll. So they get a type of sugar produced in photosynthesis and carbon from the trees.

In return for sugar and carbon, fungi release nutrients such as phosphorous and nitrogen, as well as water, to the trees. It’s a win-win.

Furthermore, the fungi will connect one tree to another through their network, which allows them to defend themselves more effectively.

Trees that get attacked by bugs, for instance, release chemical signals into the fungi. Neighboring trees pick up these signals and increase their own resistance to the threat.

Simard presents this as “tree-to-tree” communication. Botanist Stephen Woodward from the University of Aberdeen, however, looks at it not as a dialogue but as the neighboring tree’s mere adaptation to survival.

“It’s a coincidence how [trees] respond, I prefer to see it like that. They’re not firing those signals to anything. You must make the assumption that they’re not thinking at all, let alone like that,” Woodward told CNN.

“Other plants just pick [the attacked plant’s chemicals] up and then it signals inside that additional plant that there’s a problem somewhere nearby. This [mechanism] uplifts the plants’ potential to defend themselves.”

The crucial role of older trees

But whether we see trees to be “communicating”, “collaborating” or simply “exchanging” resources, it appears that trees are indeed forming a network.

In this system the older trees, also called “hub trees”, play a crucial role. They are better connected through the fungi network and their excess carbon helps the development of seedlings. In a TED talk, Simard said that this increases their chances of survival fourfold.

How trees talk to each other | Suzanne Simard 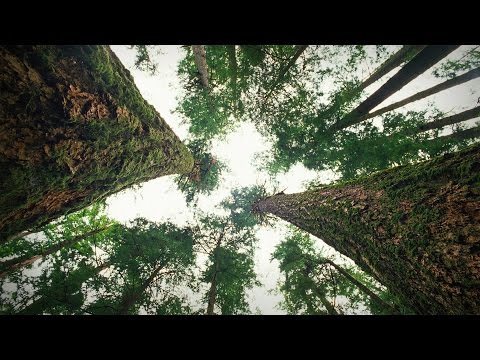 These “hub trees” can also help forests adapt to climate change. For instance, some of the oldest trees in the world like New Zealand’s Kauri trees or California’s bristlecone pine trees have been around for thousands of years.

“They’ve lived for a long time and they’ve lived through many fluctuations in climate. They curate that memory in the DNA. The DNA is encoded and has adapted through mutations to this environment. So that genetic code carries the code for variable climates coming up”, Simard added.

The “hub trees” are not just connected to other trees but also to wildlife and water quality. For example, when grizzles and wolves fish salmon, they tend to eat the guts and the brains by these old hub trees and leave the flesh there to decay. The nitrogen from the salmon then goes into the soil and is dispersed, through fungi, from the old tree to the other trees in the forest.

The head of research of the Institute of Geography of the Catholic University of Chile, Camilo del Rio, walks near a fog collection system at the Atacama desert in Iquique, some 2000 km north of Santiago, on April 19, 2016. The collection of water from fog is done using large pieces of vertical canvas to make the fog condense into droplets of water and flow down into a trough. / AFP / MARTIN BERNETTI (Photo credit should read MARTIN BERNETTI/AFP/Getty Images)
MARTIN BERNETTI/AFP/Getty Images

But overfishing and climate change harm aquatic habitats and decimate salmon populations. This reduces the availability of nitrogen in forests.

Simard, who worked as a forester in the past, thinks we should change our view of forests accordingly: “We look at them as a bunch of trees competing with each other and forestry practices are all built on that premise.”

She argues that we must slow the rate of deforestation, preserve older trees and maintain diversity instead of going for “simplified plantations” of only one or two species: “Forests are huge carbon storers, they’re our biggest assets against climate change.”

Her latest research project, funded by the Canadian government, involves planting seeds of trees from warmer areas such as California to northern climates like British Columbia. She predicts that since many of British Columbia’s current species are likely to dry out as temperatures increase over the next few decades, the interaction with seedlings from hotter climates may help them adapt as well.

“The prediction is quite radical. But now that we’ve created all this changes in climate, we need to be part of the process of helping forests adapt to it.”