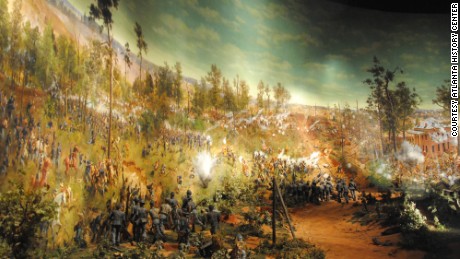 How do you move history?

Atlanta (CNN)How do you move something that's longer than a football field, tall as a four-story building, weighs almost six tons and, oh yeah, is a national treasure?

With extreme care -- and a lot of expertise.
Later this week, cranes are expected to pluck a colossal painting depicting a Civil War battle from an Atlanta museum that was its home for nearly a century.
Crane lifts part of Civil War painting
The painting, sliced in two and rolled onto enormous steel spools, will be placed on two flatbed trucks for a 12-mile journey to its new home, the Atlanta History Center in the city's Buckhead neighborhood.
Read More
Moving an artwork this big is an ambitious engineering endeavor and requires a small army of specialists, from art conservators to crane operators.
And like the aging painting itself, the story behind the artwork, "The Battle of Atlanta," is almost larger than life.

Why was it painted?

Imagine what life was like in the United States before movies and television -- not to mention CGI and other forms of augmented reality. You had to go to the circus or squeeze into a courtroom gallery at a juicy murder trial to find an attraction with a "wow factor."
In the late 19th century, along came paintings called cycloramas -- massive, 360-degree renderings of landscapes, city skylines and war, including this one about the 1864 Battle of Atlanta. The painting was intended as a tribute to a Northern victory.
A rendering for a typical cyclorama.
Cycloramas were about making big bucks, and companies turned them out as fast as they could. Sometimes they would make two copies.
After a year or so in one spot, the paintings -- the IMAX theaters of their day, according to Jackson McQuigg of the history center -- were rolled and moved to another round building to be displayed before new crowds of customers.
Although the heyday of cycloramas in the United States lasted only a few decades, 72 full-size works still exist across the globe, the International Panorama Council told CNN. Not all are on display. China is the most productive country at creating new ones.
Painters, most from Europe, take a break from the Battle of Atlanta project in Milwaukee in 1886.