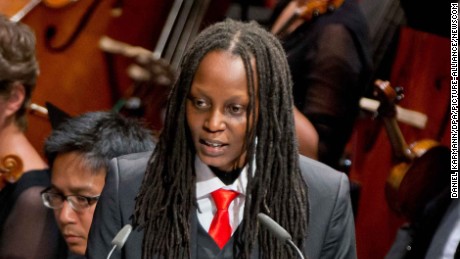 (CNN)In Uganda, where homosexual acts are punishable by prison sentences, being openly gay requires an astounding amount of courage.

Kasha Jacqueline Nabagesera is not only incredibly open about her sexuality, she's made fighting for the rights of Uganda's lesbian, gay, bisexual and transgender (LGBT) community her life's work.
And it hasn't been easy.
Call the 36-year-old's phone and you'll likely be screened by an automated system. Usually, Nabagesera will only answer if she knows the number.
It's a necessary tactic to shield her from daily harassment and serious threats.
Read More
The activist says she has repeatedly been evicted from rented homes because her neighbors don't condone her sexuality and, due to fear of being attacked, she doesn't use public transport or walk the streets alone.
But to continue her fight against homophobia in Uganda, Nabgesera says it's a price worth paying.

Growing up gay in Uganda

When she was 13 years old, Nabagesera started writing love letters to girls.
"That's when reality kicked in and the word 'lesbian' started (having) a meaning to me," she tells CNN.
Nabagesera spent most of her school years trying to avoid suspensions and expulsions.
In the subsequent years, Nabagesera says she received countless suspensions and expulsions from various schools as her sexual orientation became increasingly apparent.
But it