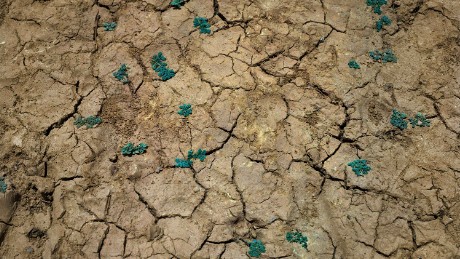 Scorched earth near Lake Bam, near the town of Kongoussi, Burkina Faso

In the arid farmlands of Burkina Faso, a young boy takes a bite from a ripe, bright yellow mango, as he looks out over the muddy waters of Lake Bam and the local cattle who come here to drink.
Whether for fish or crops, his community of subsistence farmers relies on nature's resources for their survival.
But not nearly enough rain has hit the cracked soil in recent years, and the lake is shrinking.
Boy with mango at Lake Bam, near the town of Kongoussi, Burkina Faso
In an attempt to capture the struggles and beauty of life in smallholder farming communities like this, photographer Kenneth O'Halloran visited farmlands in Malawi, Kenya, Zambia, Burkina Faso and Togo, over the last couple of years.
His images depict the daily life of some of the world's most vulnerable people.
Read More
Agriculture in the belt of countries below the Sahara desert is particularly vulnerable to climate change, with some projections saying that the production of cereal crops in the region could fall by up to 30 per cent in the coming decade, according to Self Help Africa, a non-profit organization who operate in the area and supported the photographer's work.
Harvested sunflowers in the village of Guduza, Zambia
Shorter growing seasons, a decrease in rainfall, and yet occasional destructive flooding all contribute to the vulnerability of the people in the region, who depend on their crops for their survival.
Without water, nothing grows, but too much, from heavy rain and flash floods, can create problems too.</