It’s a situation that most stressed office workers can all relate to: Long commutes, odd co-workers and a never-ending task list.

But on this occasion, it’s not your average city dweller who’s confronting the harsher aspects of adult life.

Meet Aggretsuko or Aggressive Retsuko, a 25-year-old cartoon red panda that slogs away in a mundane office job in Japan.

She might be a slick professional at work, but her cute exterior hides a darker reality: After hours, she bashes out her pent-up rage through some serious beer-swilling and heavy metal karaoke and dreams of one day leaving her dead-end job. 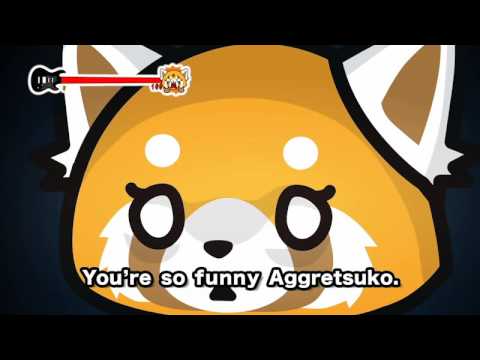 “My target was working people or people who want to vent their frustration. I think (Retsuko) is a character that these people can empathize with,” Yeti, Aggretsuko’s designer, told CNN’s News Stream.

Pointing to the changing nature of ‘kawaii’ or cute culture, Yeti, who only wanted to be identified by her nickname, told CNN that traditional forms of cute from the Hello Kitty era were no longer making the cut.

The kawaii or cute craze has dominated Japanese culture since the 1980s.

Back then, the word kawaii referred to someone or something that appeared childlike, sweet and innocent.

Today, it’s associated with the global proliferation of Sanrio’s Hello Kitty goods – analysts estimates she brings in most of the company’s profits – the Pokémon brand, as well as a variety of kawaii subgenres that encompass everything from the creepy to the grotesque.

What’s relatively unknown, however, is how the pursuit for cute didn’t begin as a big business. Instead, it was adopted by some young women as a rebellion against Japan’s patriarchy.

Born in the aftermath of the student riots that rocked Japan in 1971, the cute craze sprang from an underground literary trend in the 1970s when teenage girls started writing the Japanese alphabet in childish, rounded characters, according to Sharon Kinsella, a lecturer in Japanese studies at Manchester University.

The movement, argues Kinsella, was a way for Japanese women set on the path to motherhood to re-embrace childhood and reject adult responsibilities.

But it wasn’t just young women who latched on to Japan’s cute craze.

In the early 1970s, Sanrio began to pump out cute paraphernalia in the form of stationery and plush toys that they could market to these young female consumers.

The company, writes Kinsella, quickly established a monopoly on the cute goods market.

And though Hello Kitty – who adorns everything from dumplings to the sides of airplanes – might still be top dog in Japan’s global empire of cute, experts argue that the changes in society mean that her particular brand of kawaii is losing its appeal.

As different generations have different needs, it’s unlikely that a disillusioned office worker would identify any longer with a romantic, girly, pink Hello Kitty, Griseldis Kirsh, a senior lecturer in contemporary Japanese culture at SOAS University of London, told CNN.

“Another, slightly darker, more self-aware and tomboyish character – which is perhaps a bit closer to people’s reality, but still likeable and cute enough, opens up new markets, targeting those who would not see themselves to be like Kitty, but more like Aggretsuko,” explained Kirsh.

Japan is known globally for its punishing salaryman culture, with a recent government study finding that one in five workers are at risk of working themselves to death.

“We face situations that Retsuko experiences a lot at our office. It’s a typical Japanese culture trend, for both gender but especially girls, as we can’t say “no” to boss and to our colleagues,” said Kazumi.

In January 2017, when Sanrio’s second English-language Aggretsuko video hit the internet, international fans were quick to relate to the cartoon’s plight with many referring to the red panda as their “spirit animal.”

“I’d wager that most young women who have worked an entry-level office job would be able to relate (to Aggretsuko),” Helen Tseng, a San-Francisco-based graphic designer, told CNN.

“And while Aggretsuko is probably Sanrio’s most feminist character yet, I have male friends who relate just as deeply to her plight (and love of alcohol and metal karaoke),” added Tseng.

Aggretsuko boasts a far slimmer fan base compared to her predecessor – at least when measured by her Twitter followers.

This is totally my spirit animal right now #aggretsuko https://t.co/5Lez9zziOI

“Aggretsuko appeals both those who are frustrated by whatever aspects of daily life are annoying, while also playing on this notion that feigned cuteness is simply fake,” Ian Condry, a professor of Japanese cultural studies at MIT, and author of “The Soul of Anime” and “Hip-Hop Japan,” told CNN.

“People want the real, and this becomes a way of highlighting that cute, adorable worlds often aren’t believable,” added Condry.