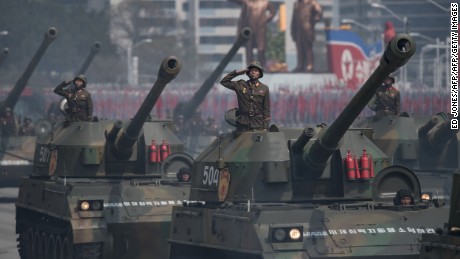 Has the North Korean threat increased?

(CNN)Aggressive rhetoric on the Korean Peninsula continues to ratchet up.

US Vice President Mike Pence reiterated this week that the "era of strategic patience" was over, days after Pyongyang attempted another missile launch and analysts warned a sixth nuclear test could be imminent.
Through all the rhetoric and saber-rattling however, it can be difficult to answer what should be a simple question:

Has the North Korean threat increased, yes or no?

North Korea is a nuclear-armed state with a wide-ranging missile program capable of medium to long-range strikes. It also possesses a large arsenal of conventional, chemical and biological weapons.
The number of missiles paraded in Pyongyang this week was "something of a scale we've never seen before," said David Schmerler, a research associate at the James Martin Center for Nonproliferation Studies.

The number of tests, range and sophistication have gone up exponentially under Kim Jong Un.

Read More
The "vast number" of solid-fuel missiles on display was "most likely intended to drive home the point that (North Korea) has achieved the technical capability to produce longer-range solid-fuel missiles," he said.
Such weapons can be stored ready for launch for longer periods of time and require less preparation, making a surprise attack easier.
A series of solid-fuel missiles were on display at North Korea's most recent military parade.
North Korea has long claimed that it is capable of miniaturizing a nuclear weapon in order to attach it to an ICBM, and Kim has vowed to test an intercontinental missile in the near future.
It has also conducted apparently successful tests of submarine-launched ballistic missiles that increase the range from which potential attacks could be staged.
"The number of tests, range and sophistication have gone up exponentially under Kim Jong Un," Euan Graham, an analyst at the Lowy Institute in Sydney, told CNN last month.
The North Koreans "have a fixed set of aims and ambitions, they want a nuclear weapon that's attached to a ballistic missile system," said Nick Bisley, an analyst at Melbourne's La Trobe University.
<div class="el__e