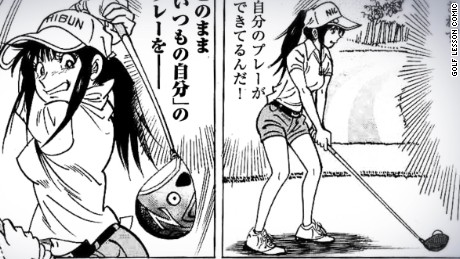 Is manga the miracle cure for your golf game?

For May's edition of Living Golf, Shane O'Donoghue heads to Japan. "Tee Time in Tokyo" premieres on May 4 at 0930 GMT.

(CNN)Might the key to curing your slice lie in the age-old Japanese art form of manga?

The comic craze, hugely popular in Japan since the early 19th century, boasts several notable golfing titles such as "Kaze NoDaichi" and "King Golf."
But "Golf Lesson Comic" is a slight anomaly in the genre. It's less about entertainment, and more about serious tips to help improve your drives, chips and putts.
"It's not about fun -- that's not really allowed in golf lesson manga," Takanobu Tamura, an illustrator at the comic, told CNN's Living Golf show.
"It's a lesson, so obviously, you have to draw it in a way the reader can understand.
Read More
"You have to write it so that the method the lesson professional is describing is properly communicated to the reader, so entertainment takes a backseat.
"And then you have to draw a proper hook shot to represent a hook, a slice to represent a slice shot -- having to draw the slice form is what I take most care over."
That authenticity and dedication is what compels 100,000 people to buy the magazine every month in what is the second biggest golf market on the planet behind the United States.
Golf Lesson Comic sells about 100,000 copies a month
READ: Nicklaus & Nadal salute Sergio's Masters win
Utilizing the traits that manga is famed for -- expressive characters with big bulging eyes and abstract background designs -- "Golf Lesson Comic" illustrates scenarios that help the reader hone their swing.
It also drills down on an aspect of golf almost as important as a player's swing -- their mentality.
After all, Bobby Jones, the creator of the Masters tournament and one of America's most famous players once said: "Competitive sports are played mainly on a five-and-a-half inch court, the space between your ears."
Shinji Matsuyama, the magazine's editor, explained: "You often spend more time thinking than you do playing, and I think that such psychological depiction is suited to manga.