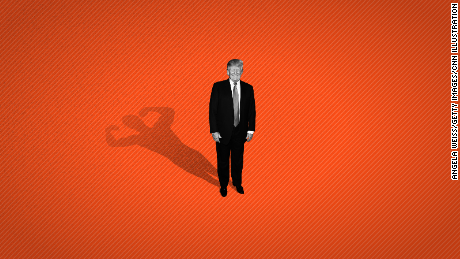 Why Trump is cozying up to strongmen leaders

(CNN)US President Donald Trump's affinity for authoritarian leaders across the globe has been one of the few constants during his chaotic first few months in office.

From Russian President Vladimir Putin to Philippine President Rodrigo Duterte, Trump has gone out of his way to lavish praise on some of the world's most notorious strongmen.
On Tuesday, Trump welcomed one of them -- Turkish President Recep Tayyip Erdogan -- to the White House.
The Turkish leader lands in Washington one month after winning a divisive referendum that critics say will grant Erdogan dictatorial powers back at home.
But Trump isn't shy about cozying up to controversial figures. Earlier this month, he said he'd be "honored" to meet North Korean despot Kim Jong Un "under the right circumstances." That came just weeks after Trump said Egyptian President Abdel Fattah el-Sisi was doing a "fantastic job" during an Oval Office meeting.
Read More
It's not new for the US to turn a blind eye to totalitarian regimes in the name of political stability. But Trump's regard for leaders that many consider bad actors goes beyond that.

President Recep Tayyip Erdogan: 'I give him great credit'

Even before he congratulated Erdogan on the referendum win that will hand him sweeping new powers, Trump's position on Turkey raised eyebrows.
As a candidate, Trump praised Erdogan for his handling of a failed coup attempt despite a major crackdown on perceived opposition figures -- including journalists, educators, judges, and members of parliament.
During the campaign, Trump also admitted that his family's business interests in Turkey posed a conflict. And that was before revelations that his former National Security Adviser Michael Flynn had been lobbying for the country.
While some analysts say that Trump's comments are a worrying endorsement of authoritarianism, others suggest it's more reflective of his focus on fighting terror.
"You could see it as a strategy of saying, 'We're going to turn a blind eye to the state of your domestic politics, authoritarianism, human-rights abuses, in order to gain more cooperation on areas that matter to America' -- like security issues," Blaise Misztal, Director of National Security at the Bipartisan Policy Center, told CNN.
While Trump may be courting Erdogan as a vital ally in the fight against ISIS, it's not clear what that will look like in practice -- especially when it comes to the US's most effective proxy force -- the Kurds, seen by Turkey as the enemy.
Trump recently announced that Washington would provide arms to Syrian Kurds as part of the fight against ISIS, angering Turkey.
"In the last 100 days we've seen Trump's frustrations with governing in a democratic system, in trying to get things done," Misztal says. "If you're an autocrat, and you hold all the power, you can be much more efficient and effective. That's the sort of demonstration of power that Trump seems to appreciate."

Over the course of his campaign, Trump broke with long-standing US policy in his repeated praise of Putin. But the US leader has been on record complimenting his Russian counterpart since 2013, when Trump's Miss Universe pageant was held in Moscow. Since then, Trump has talked about Putin more than 80 times, according to a CNN KFile investigation.
"The extent to which he went out of his way to defend Vladimir Putin was astonishing, worrying and unprecedented," James Nixey, head of the Russia and Eurasia program at UK-based Chatham House, told CNN.
Trump's statements stoked suspicion over his campaign's possible connection to Russian interference in the election. As such comments began to attract more scrutiny, Trump dialed back his language. And in January, he said he believed Russia was responsible for the hacking of the Democratic National committee. But Trump argued that a good relationship would be beneficial to the US.
"If Putin likes Donald Trump, I consider that an asset, not a liability, because we have a horrible relationship with Russia," Trump said in a press conference on January 11.
"You can admire Trump's sentiment, but the devil is in the detail," Nixey said. "Getting on with the Kremlin and Putin is fine in theory, but difficult in practice. And it requires giving in to what Russia wants, a freer hand in Ukraine and the Middle East, for example."
Trump will meet with Putin for the first time