When the Supreme Court made same-sex marriage legal nationwide two years ago, the White House was illuminated with rainbow lights reminiscent of the pride flag to celebrate.

For Amber Hikes and many others in the LGBT community, the lights were a powerful symbol of a government’s support for a marginalized community that had historically struggled to be recognized, much less openly supported.

Now Hikes, a black queer woman, is excited about a new gay-rights symbol: a pride flag with additional black and brown stripes above the rest of the rainbow. The stripes represent LGBT individuals of color, a group that can often be overlooked within the overall LGBT umbrella. 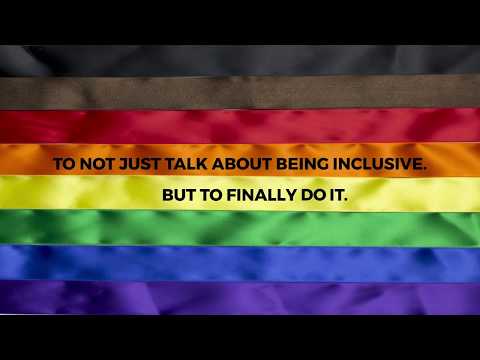 The flag was unveiled at a recent Pride Month kick-off event in Philadelphia as part of a new campaign, More Color More Pride, which aims to recognize nonwhite LGBT communities as part of the broader pride movement, starting with the most visible and widely-recognized symbol of the LGBT community.

The campaign was developed by Tierney, a local ad agency that worked with Philadelphia’s Office of LGBT Affairs, where Hikes is the executive director.

Hikes said she shed a tear when the flag was raised last week for the first time. Others at the event had similar reactions. To the best of Hikes’ knowledge, Philadelphia is the first city to publicly and symbolically recognize racial discrimination within the LGBT community.

“To see this at City Hall is such a profound statement,” Hikes told CNN.

shout out to alex velez for reppin' gran varones today at the philadelphia pride kick-off event. thanks @PhillyLGBTgov for inviting gv! 🌈❤️ pic.twitter.com/bSk4TJ9y5k

Philadelphia’s downtown gay neighborhood, called the Gayborhood, has faced multiple instances of racial discrimination within the past year, including discriminatory dress-code policies at local bars and a leaked video of a nightclub owner using a racial slur. The campaign and new flag are one way the city and the Office of LGBT Affairs are addressing those issues.

Hikes said she has already seen the impact the new flag and event have had on residents in Philadelphia as well as other cities across the country. A combination of citizens, community groups and other local government officials have reached out to her from multiple cities, including Miami, New York, Los Angeles and Chicago, to express their appreciation for the added level of visibility.

“Right off the bat, it has absolutely started a conversation, certainly in this city and beyond,” she said.

Protesters demonstrate the day after US President Donald Trump's victory in the 2016 election.
Chelsea Lauren/REX/Shutterstock/AP

The first 100 days in LGBT rights

But with the nationwide support came pushback and criticism. Hikes said that the “vast majority” of critics are gay white men, a sector of the LGBT community that doesn’t necessarily understand the issues that LGBT people of color might face.

“White people do not know what racism looks like, because that’s the definition of racism,” Hikes said.

There is a presumption among gay white men that the rainbow flag already represents everyone, Hikes said. When other variations of the pride flag have been introduced, such as striped flags representing bisexual or transgender pride, there was significantly less criticism, she said.

“If we use that logic, there should have been the same kind of pushback,” Hikes said.

According to a 2013 survey by the Pew Research Center, 34 percent of LGBT survey respondents identify as nonwhite. The survey also found that white respondents were more optimistic about society’s acceptance of LGBT individuals than those who were nonwhite.