She is part of the Sugar Shack Alliance, an anti-fossil fuels activist group

A 98-year-old woman was arrested while protesting a natural gas pipeline expansion on Saturday.

Frances Crowe, a peace activist, led a group of eight pipeline opponents in staging a mock funeral for the fossil fuel age near the site of the Kinder Morgan pipeline extension project in Sandisfield, Massachusetts.

The activists carried both the coffin and Frances, sitting in her wheelchair, to the site where the pipeline was being built. They planned to bury the coffin in the hole intended for the pipeline, and set it down in front of the construction vehicles, the Sugar Shack Alliance said. 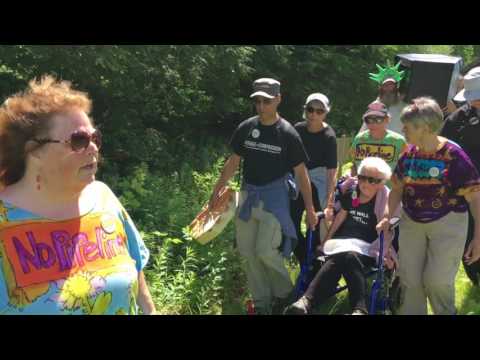 “The police came and said if we went any further they would arrest us. And we tried to go under the rope but we couldn’t get under it, so they arrested us where we were. They put us under arrest,” Crowe told CNN affiliate News10. Crowe did not immediately respond to a CNN request for comment.

Crowe and eight other members of the Sugar Shack Alliance were arrested and charged with trespassing. Kinder Morgan declined to comment on the arrests, and deferred to state police for more information.

The activists want to stop construction of the Kinder Morgan pipeline extension in western Massachusetts, which will add 4 miles of natural gas pipeline to connect two existing lines.

“We don’t need to dig up the soil for a pipeline,” Crowe told News10. “Solar and wind will take care of all of the energy needs for the state.”

Supporters of the pipeline say it will help provide additional fuel for the area, but opponents say the area already has plenty of fuel. Sugar Shack Alliance member Vivienne Simon said the pipeline will simply act as a storage vessel, where natural gas will sit before being exported.

The pipeline will go directly through public land protected by Article 97 of the Massachusetts Constitution. Activists say that land is home to protected wetland and a sacred Native American burial site.

Simon said she and 31 others have been arrested for protesting the pipeline in a series of four demonstrations. She said the Sugar Shack Alliance plans to organize public education efforts, lawsuits and other protests to oppose the pipeline.

On Saturday, most of the group volunteered to get arrested to support Crowe, Simon said.

Simon reveres the nonagenarian, who is somewhat of a legend in the area, she said. “She’s a 98-year-old dynamo,” Simon said. “She’s really quite extraordinary.”

The Northampton resident and grandmother of five is no stranger to activism.

Crowe was most recently arrested for protesting the Vermont Yankee Nuclear Power Plant. She’s been arrested multiple times before that, she told News10.

She became a peace activist during World War II, and has since joined many causes, including fighting nuclear power, according to local media.

A ‘funeral’ for the fossil fuel age

“I chose to be arrested today to show respect for our elders, our resolve to resist, and to stop this pipeline from being finished,” activist Dennis Carr said in a news release.

During the mock funeral the activists staged Saturday, a bicycle hearse pulled a cardboard coffin down Cold Spring Road. “The tide is rising, and so are we,” the protesters chanted.

The procession was accompanied by a local singing group that calls itself the Casquettes, and a man in a 9-foot-tall polar bear costume.

“And this is where energy lies,” Crowe said, addressing the crowd. “In people, power, wind and solar.”

Crowe said the only way to bring change is to act, not wait for others.

“Young people are busy getting an education, getting set up in meaningful employment, and then they are busy raising their families,” she told News10. “I think it takes the older people like me to step up and put their bodies in the action.”