Why Jack Ma went to Kenya, Rwanda with 38 Chinese billionaires in tow

Editor’s Note: Perez Tigidam is a brand consultant and media entrepreneur based in Lagos, Nigeria. He leads the strategy effort at Arden & Newton brand management company, he is also the founder and publisher of The Nerve Africa, a business news publication covering the new economy, business and innovation across Africa.
The opinions expressed in this commentary are his.

Jack Ma, Asia’s richest man and founder of Alibaba Group is on a two-day trip to east Africa, visiting Kenya and Rwanda with 38 fellow Chinese billionaires, all no doubt poised with expensive fountain pens, ready to ink billion dollar deals.

Jack Ma's full public lecture at the University of Nairobi 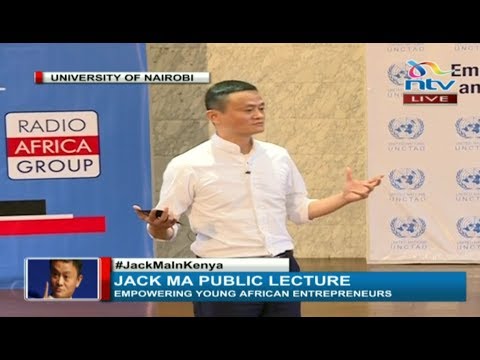 Governments across the region have continued to build structures ready for every investment opportunity. The most important structures have been built in countries like Kenya and Rwanda, where the government has shown great support for innovation and entrepreneurship.

Mobile payment platforms M-pesa, M-shwari and M-kopa are all successful stories highlighting Kenyan innovation, which has been fostered by incubation spaces such as iHub and supported by companies like IBM, Intel and Google, operations in Nairobi.

Similar structures are present in Rwanda, where a new business can be registered in just six hours. K-Lab, Think by Tigo and The Office are well known in Rwanda for nurturing several startups in the country, including mobile technologies company Hehe Ltd.

File: Alibaba founder Jack Ma gives a thumbs up after speaking at an event to mark the 10th anniversary of China's most popular online shopping destination Taobao Marketplace in Hangzhou on May 10, 2013. As Ma steps aside after building the world's largest online retailer, the Chinese firm is preparing a huge stock offer prompting comparisons with Facebook -- whose profits it dwarfs. AFP PHOTO/Peter PARKS (Photo credit should read PETER PARKS/AFP/Getty Images)
Peter Parks/AFP/Getty/File

What I learned as a Westerner inside China's internet giant Alibaba

In 2012, the Rwandan government launched YouthConnekt, an initiative to encourage entrepreneurship among the country’s youth.

According to the YouthConnekt website, the platform connects young people to role models, resources, knowledge and skills, internships and employment opportunities, enabling them to participate in shaping a better future for themselves, Rwanda and the World at large.

Ma, who is also a special adviser for the UN on youth entrepreneurship, was in Kenya Thursday where he addressed a group of 500 aspiring business leaders at the University of Nairobi.

Earlier, he met with President Uhuru Kenyatta in Nairobi where they discussed cooperation in supporting small businesses in the country.

Ma, who said he was surprised by Kenya’s broadband infrastructure, told some senior executives in Nairobi that he would consider investing in Kenya.

By the time Ma and his billionaire friends from the Beijing Chamber of Commerce leave east Africa on Friday, deals would have been struck on several fronts, especially in entrepreneurship, opening a stream of further Chinese investment into the region, where money from China is evident at almost every turn.

But more valuable than any amount of Ma cash that finds its way into the east African economy, are the nuggets he is dropping as he travels from Nairobi to Kigali.

Ma has often advised developing countries to beware of creating regulations and taxes that could kill small businesses before they even get a chance to stabilize.

In Kenya, he spoke of how opportunities for trade can increase through the use of e-commerce. He also advised the aspiring business leaders he met on how to be successful.

Africa’s young generation has been setting global trends in innovation and technology. This incredible feat has been supported by policies and structures put in place by governments in countries like Rwanda and Kenya.

There are so many opportunities in Africa but investments run to places where innovation is happening.

If Amazon’s Jeff Bezos visited Africa, there can be little doubt which countries would be first on his itinerary.