Laughing at ISIS to defeat them

Editor’s Note: The author is a former CNN producer and undertook this project with funding from the Pulitzer Center on Crisis reporting. For more on humor and its impact, watch CNN’s “The History of Comedy” Sundays at 10 p.m. ET/PT.

Deep in the outskirts of Mumbai, India, tucked away in a small conference room among dozens of buildings known as Bollywood’s “Film City,” the US government is implementing a unique, and until now, unknown counterterrorism program aimed at diminishing the online influence of terror groups like ISIS - by making fun of them.

Seated among more than a dozen, millennial-aged comedians wearing t-shirts, hoodies, and blue jeans are a handful of US officials eager to find out how this new concept will be received by the local youth. At the front of the room, eager to begin his presentation, is Priyank Mathur, a former counterterrorism intelligence analyst for the Department of Homeland Security who moonlighted as a comedy writer for the satirical news website “The Onion”.

Standing next to a white board that reads “Fighting Terror With Comedy,” Mathur is joined by East India Comedy, a wildly popular collective of stand-up comedians and sketch writers based in Mumbai, who, like the other comedians in attendance, have been invited by the US government to participate due to their influential social media accounts and online presence.

They screen and discuss East India Comedy’s latest video sketch, “I Want to Quit ISIS,” which spoofs one man’s attempt to quit the terrorist group. It is set in a boring, run-of-the-mill business office, where the man’s efforts to quit the terror group turn into a bureaucratic nightmare as he’s forced to debate his boss on the tenets of Islam, all while artfully highlighting the contradictions of ISIS’ ideology and methods.

“The basic premise was the corporatization of the terrorism process and just the idea of terrorists wearing blue shirts and ties and going to an office to get work done was what the idea was and I think just like every other brainstorming process it just changes and changes,” Kunal Rao, a member of East India Comedy, said. 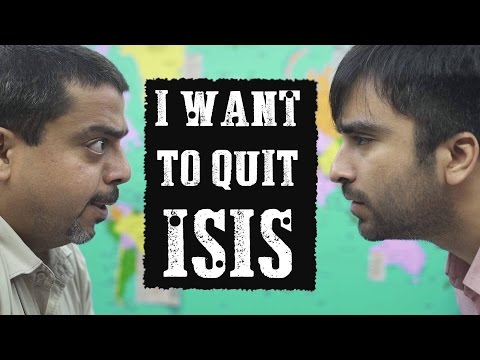 Uploaded to their YouTube and social media accounts just a few weeks earlier, the five and a half minute video had already been viewed well over one million times by their fans and followers in South Asia and despite tackling such a thorny subject, it was one of their most well-received sketches. Compare that to the number of views the State Department’s previous videos garnered in an effort to dissuade those interested in joining ISIS and it’s clear Mathur’s approach has been more successful, at least in terms of getting eyeballs.

“There are a few government controlled YouTube accounts that put out anti-ISIS videos, the Global Engagement Center by the State Department has put out about 42 videos in the last couple of years but you know, they’ve gotten a combined total of about 55,000 views,” Mathur said. Most of the State Department videos have hundreds or a few thousands of views, although there are some exceptions. One video that pairs extremely violent and graphic content with irony has close to a million views, but that video is also several years old.

“So, if you’re a 16-year-old kid in Islamabad, what would you rather watch: an exciting action movie that looks like “Call of Duty” or a PSA from Uncle Sam? You would watch the action movie,” says Mathur of videos put out by ISIS as opposed to the others from the government. “But what if we could fight back with our own entertaining videos that didn’t look like government PSA’s because they weren’t made by the government, they were made by local, social media superstars that local people actually looked up to and enjoy watching.”

The journey from stand-up comedians to counterterrorism advocates began the previous month when East India Comedy members received a mysterious phone call from their manager informing them that officials from the State Department had invited them to lunch at the U.S. Consulate and wanted to have a discussion about counterterrorism. “We had no idea why they were calling comedians,” Rao said. “It was free lunch, that’s why we went,” recalled his colleague Azeem Banatwalla.

It was at this meeting that they met Mathur, who had pitched his idea to former counterterrorism colleagues in Washington, DC. Keen to see it implemented, they helped him find funding through the little known, and currently unfilled, Office of the Special Representative to the Muslim Community that existed during the Obama Administration. They’re hoping the success of their video could lead to more videos in other countries through different government agencies.

Asked about the program a spokesman for the State Department offered this comment:

“The Department of State continues to engage with Muslim communities and leaders both domestically and internationally on key foreign policy priorities through bilateral, multilateral, and civil society outreach. We are in the process of exploring and evaluating ways to improve organizational effectiveness and efficiency, including optimizing the impact of available resources.”

“It was a really strange meeting because no one in that room ever thought they would ever be in a room with the other people,” Mathur recalled. “I said you guys ought to be working with local social influencers in places like India, Pakistan, Indonesia, where there is a large Muslim populations and create videos that are actually cool and are entertaining that people would want to watch that also, kind of subtlety, counter the narrative of these extremist groups and reveal how absurd their ideologies are. And the State Department, to their credit, was open to this idea.”

Home to approximately 175 million Muslims and a population that has the second most cell phone users and the fourth most internet users in the world, according to the CIA World Factbook, the cultural conditions in India made it an attractive location for a pilot program for the State Department to test this idea. But these same conditions are also what makes the Muslim population in India an attractive recruiting pool for ISIS, although Indian officials pride themselves on the country’s pluralism and democratic values that they believe are perfect antidotes for violent extremism.

Having already recruited tens of thousands of young Muslims from dozens of countries around the world, ISIS dramatically transformed the strategy of terrorist propaganda. Long gone are the days of Osama bin Laden taping a message for the world to see three months after being filmed in a dimly lit cave surrounded by bodyguards with AK-47’s casually propped up around the room.

And while the Muslim community in India has not yet experienced having hordes of its youth eager to go fight in Syria, like many other Asian or European countries, the bullet holes that still riddle the facade of the Leopold Cafe, one of the many targets of the 2008 Mumbai terrorist attacks that killed more than 150 people, are a constant reminder that India will never be immune from terrorist attacks.

ISIS knows their target audience and they appeal to it as any other company or brand would hocking their products in the West. By using slick imagery, fast-paced music, and action sequences, ISIS has been able to best government efforts to dissuade young people from joining.

“I thought, how are we, the country that invented Madison Avenue and Hollywood and arguably the greatest messaging machine in the history of all time - how are we losing, what is essentially a messaging battle to folks halfway across the world that are operating on a shoe sting budget. And so I think to counter what they are doing, we need to up our social media game,” Mathur said.

And while Mathur had the US government on board, he anticipated a hard time getting an influential comedy group to publicly mock ISIS. “This is a risky ask, when you ask someone to make a video that criticizes ISIS or some other terrorist group, that’s a lot to ask because you’re asking them to put themselves out there and put themselves potentially in harm’s way and no one wants to attract the ire of a terrorist group like ISIS,” Mathur said.

“I never really found there to be a risk in it because I’m Muslim anyways,” laughed Banatwalla. “And I’ve made all the terrorist jokes about having like four wives, and blowing yourself up, and haram, and not drinking, and pork and all of that and I’ve never really felt any problems.”

So, to Mathur’s surprise, none of the comedians had any reservations, despite knowing the inherent risk involved. Mathur even recalled one comedian explaining that, while they usually get approached by brands to sell soda or potato chips, they’ve never had the opportunity to do something as important as fighting terrorism.

“I didn’t think what we were most afraid of was the terrorist implication but the fact that terrorism and religion is unfortunately connected. So we were most worried about was the pushback in terms of like ‘why are you generalizing it in terms of this religion.’ That’s where we found it difficult but otherwise a joke is a joke is a joke,” Rao explained. “But it’s cool man, I think it’s great that the government, some government is taking action and trying to do it it in a very different way and that’s what we like about it,” Rao said.

“I Want to Quit ISIS” was not the only video funded in India by the US government through Mathur’s program, but the State Department was hesitant to discuss these types of programs further with one official saying, “we fund these types of things all around the world and we don’t always want people to know about them.”

While Mathur begins searching for funding to export his project to other countries with large Muslim populations, he’s hopeful the Trump Administration will see the value in continuing this program. “I do think the new administration is uniquely poised to appreciate exactly what we’re doing and that’s because who better understands and who better appreciates how effective social media and entertainment can be in spreading a message than President Trump,” Mathur said.