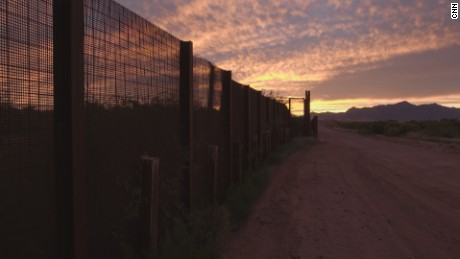 The fence that divides the U.S. and Mexico in Naco, Arizona.

The deadly toll of human smuggling and trafficking in the US

(CNN)When 10 smuggled migrants died in San Antonio from a scorching hot semi truck with almost no air to breathe, the country was appalled.

But their deaths are just a fraction of how many people die each year trying to flee their homelands and sneak into the US.
Every year, hundreds of undocumented immigrants perish trying to make the journey. And virtually all of those deaths occur while being smuggled, Customs and Border Protection spokesman Mike Friel said.
Friel said virtually all those crossing the border illegally are led by smugglers. That's because cartels have a stranglehold on the Mexican side of the border and control much of the land, he said.
"There are very few people who attempt to cross on their own," Friel said, and virtually no one would "risk going against the cartel."
Migrants walk along train tracks in Sonora state, Mexico, on January 13, 2017. Hundreds of Central American and Mexican migrants try to cross the US border daily.
Read More
In the San Antonio case, one survivor said he was told by his smuggler "that people linked to the Zetas (cartel) would charge 11,000 Mexican pesos ($620) for protection," according to a criminal complaint against the truck driver.
Even if smuggled migrants survive the often oppressive conditions, their odds of getting apprehended by a border patrol agent are much higher than death -- about 1,270 times higher, as of last year.
As you can see, the number of apprehensions has fluctuated over the past 20 years. There are several contributing factors to this, Friel said:
A Border Patrol agent keeps watch at the US-Mexico border at San Ysidro, California, in April 2017.
This past year, the number of apprehensions has ticked back up. And more than 30,000 unaccompanied children were among them.
Not everyone crossing illegally from Mexico to the US is Mexican. In fact, a huge number of border-crossers are actually from Central American countries, data from the US Border Patrol shows.
<div class="zn-body__paragraph" data-paragraph-id="paragraph_40437696-D493-2A9E-0600-854DF0EBE44