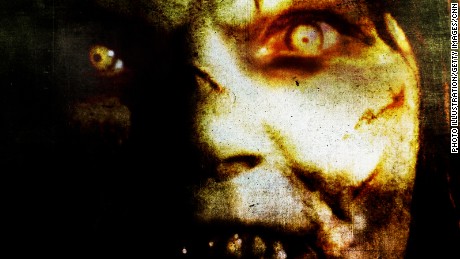 When exorcists need help, they call him

(CNN)A small group of nuns and priests met the woman in the chapel of a house one June evening. Though it was warm outside, a palpable chill settled over the room.

As the priests began to pray, the woman slipped into a trance -- and then snapped to life. She spoke in multiple voices: One was deep, guttural and masculine; another was high-pitched; a third spouted only Latin. When someone secretly sprinkled ordinary water on her, she didn't react. But when holy water was used, she screamed in pain.
"Leave her alone, you f***ing priests," the guttural voice shouted. "Stop, you whores. ... You'll be sorry."
You've probably seen this before: a soul corrupted by Satan, a priest waving a crucifix at a snarling woman. Movies and books have mimicked exorcisms so often, they've become clichés.
The 1973 film "The Exorcist" shaped how many see demonic possession.
But this was an actual exorcism -- and included a character not normally seen in the traditional drive-out-the-devil script.
Read More
Dr. Richard Gallagher is an Ivy League-educated, board-certified psychiatrist who teaches at Columbia University and New York Medical College. He was part of the team that tried to help the woman.
Fighting Satan's minions wasn't part of Gallagher's career plan while he was studying medicine at Yale. He knew about biblical accounts of demonic possession but thought they were an ancient culture's attempt to grapple with mental disorders like epilepsy. He proudly calls himself a "man of science."
Yet today, Gallagher has become something else: the go-to guy for a sprawling network of exorcists in the United States. He says demonic possession is real. He's seen the evidence: victims suddenly speaking perfect Latin; sacred objects flying off shelves; people displaying "hidden knowledge" or secrets about people that they could not have possibly have known.
<div