Refugee Olympic Team: Where are they now?

They came, they saw, their stories inspired the world.

Ten athletes — victims of unimaginable hardship, forced to leave their homes in South Sudan, Congo, Ethiopia and Syria — united under a single flag.

IOC President Thomas Bach called them “a symbol of hope” in a time of crisis. The Human Rights Watch claimed their involvement had “reframed the debate.”

A year on from Rio 2016, how have the lives of the members of the Olympic Refugee Team changed?

Yiech Pur Biel only remembers crying twice in his life: when he was separated from his mother as a child during the devastating Sudanese civil war and, many years later, when he found out he’d be running the 800m at the 2016 Rio Olympics.

One year on: He might not have qualified from his heat, finishing in 1:54.67, but Pur Biel’s life has changed forever.

Just months before the Games began, the 22-year-old was still training barefoot in the vicinity of the Kakuma refugee camp in Kenya.

But he has now traveled the world, attended the first UN Summit for Refugees and Migrants, and met a number of world leaders, including former American President Barack Obama and Pope Francis.

Yet his most cherished moment has been a telephone call from his mother.

“My family never believed I was alive,” Pur Biel tells CNN, explaining that someone from his hometown of Nasir had heard about his Rio exploits and took his mother to an aid agency to make the call.

“I was happy to talk to them; [now] I want to meet my mother face-to-face, as well as my brother and sister.

“I have a big refugee family, but I also have my real family which needs my care.”

The runner’s mother didn’t know what the Olympics were, but understood her son had gone “somewhere far away” and would come back safely.

Pur Biel is now training for Tokyo 2020, alongside studying for a diploma in public relations — something he “never thought possible.”

He has also met his idol, double Olympic champion David Rudisha, telling the Kenyan he hopes to break his 800m world record.

The tale of Yusra Mardini, Syria’s teenage swimmer who won her Olympic 100m butterfly heat just a year after swimming for her life, captivated the world.

Her house in Aleppo was bombed, the motor on the dinghy transporting her from Turkey to Greece stopped working, but she never lost hope.

Together with her sister, Sarah, Mardini pushed the boat for three hours through the Aegan sea toward Greek shores, potentially saving the lives of the 18 other migrants on board.

She might not have made the semifinals in Rio, but insisted “the only thing I wanted was to compete.”

One year on: Mardini is fighting new battles, shedding light on the millions displaced around the world and reclaiming the word ‘refugee’ as a goodwill ambassador for the United Nations Refugee Agency (UNHCR).

Named by People magazine as one of ’25 women changing the world,’ the swimmer is in the process of penning an autobiography, with the story of her life also set to be told in a film by the award-winning director Stephen Daldry.

Mardini competed in the FINA World Aquatic Championships this July, returning to Hungary just two years after sleeping rough in a Budapest train station en route from Syria to Germany.

She is currently living in Berlin, preparing for Tokyo 2020.

Having grown up amid the five-year civil war in the Democratic Republic of Congo, judoka Popole Misenga sought asylum — without a passport, money or food — in Brazil after the 2013 World Championships in Rio. Three years later, he competed at the Olympics in the same city.

“My fight in the Olympics will be for all refugees, to give them faith in their dreams,” Misenga told CNN last year, before going on to reach the last 16 of the men’s 90kg division, losing to world No. 1 Gwak Dong-Han of South Korea in the final minute of his bout.

One year on: Misenga has been granted asylum in Brazil, married a local and become a father.

He says Rio is a “magical place” to live and, for the first time since childhood, he has been reunited with many of his relatives, screaming “I’m alive! I’m alive!” into his phone during a call with his brother.

READ: Farewell Usain Bolt, a wonder of our sporting age

Thirteen years after running from soldiers in Chukudum, South Sudan, Rose Nathike Lokonyen became the Refugee Olympic Team’s first flagbearer. She then went on to compete against some of the world’s finest middle-distance athletes, finishing seventh out of nine in her 800m heat in 2:16.64.

One year on: Taking time out from her heavy training schedule, Lokonyen traveled to Switzerland in September for the 33rd session of the United Nations Human Rights Council.

Just a month later, the 22-year-old addressed Pope Francis in Sweden, reflecting on the transformative power of sport and calling for world peace.

Her favorite memory of Brazil was seeing Copacabana Beach — “I was excited because it was my first time seeing the water” — but her greatest personal battle remains on the track.

Having ran alongside two-time Olympic champion Caster Semenya in her heat in Rio, Lokonyen is now determined to beat the South African.

She will get the opportunity to test herself again against the 26-year-old at the IAAF World Championships in London, with the 800m heats taking place on August 10.

Paulo Lokoro had never been anywhere except his native South Sudan and Kenya’s Kakuma refugee camp before meeting legendary distance runner Tegla Loroupe, who is also the founder of an international humanitarian charity.

The 25-year-old had never even trained in shoes. How thing can change.

One year on: “I went to the Vatican and met with the Pope,” Lokoro tells CNN. “The first day I arrived they treated me like a big boss and I am not a boss! People liked me a lot.”

A keen football fan, he also traveled to Barcelona and stood in the center of the Nou Camp pitch, with club president Josep Maria Bartomeu, to kickstart the Spanish side’s #SignAndPass campaign.

“God gave me the chance,” Lokoro, who hopes to compete as a marathon runner at Tokyo 2020, says. “I was not aware that my life could be changed so I am grateful to the UN Refugee Agency and the Tegla Loroupe Peace Foundation.

“Most people hear about refugees but they have not met any person who is a refugee. I created many friendships.”

READ: Bolt in numbers - Why the Jamaican is the greatest

For Yolande Mabika, judo is a form of catharsis.

More than two decades on from the day rebels attacked her home in Bukavu, Congo, she says the sport has given her discipline and “a strong heart.”

One year on: Though the 29-year-old will never stop thinking about what she’s left behind, the pain of losing her family has faded. The judoka is currently working as a waitress in a Brazilian restaurant which provides food for the homeless. It is run by a Syrian refugee chef.

She hopes to one day work with disadvantaged young girls, to help them overcome the sort of obstacles she faced.

“Brazil is my home now,” Mabika said. “I want to stay here and build a new life.”

James Chiengjiek was lucky to avoid the fate of South Sudan’s child soldiers.

Just 13 when he left home, he reached the Kakuma camp in 2002 and quickly capitalized on his athletic talents despite a lack of top-class facilities. in Rio, he secured a personal best in the heats.

One year on: It is not winning that drives Chiengjiek. “The most important thing is not to win golds,” he says. “But to spread the peace.”

He says he learnt “a lot” at the Olympics and received advice from Justin Gatlin, the American sprinter twice banned for doping who won 100m World Championship gold in London on Saturday. He also conversed with football’s $263 million man.

“We met Neymar at the dining hall,” the 25-year-old recalls. “He asked to take a photo with us. We sat down and talked.

“I was so happy to meet him. I used to play in Kakuma. My jersey is also number 10 like Neymar.”

Inspired by a piece of advice from the Brazilian star — “forget the past and focus on the future” — Chiengjiek has his sights set on Tokyo 2020.

“There is big competition in the 800m race here in the training camp,” he says. “That is why I am trying very hard, three times a day – in the morning, midday and in the evening.”

Seven years ago, Rami Anis was swimming for Syria at the Asian Games in China.

After his home city of Aleppo was bombed, nothing was the same again.

His journey to safety — partly made on an inflatable dinghy — has taken him to Turkey, the Greek island of Samos and, finally, to Belgium, where he gained asylum in December 2015.

The 26-year-old achieved a personal best time of 54.25 seconds in his 100m freestyle heat in Rio, with his coach branding his inclusion on the team a form of “justice.”

One year on: Anis met his idol Michael Phelps – the most successful Olympian in history – at the Laureus Awards in Monaco. He hopes the war in his home country will end so he can represent Syria at Tokyo 2020.

One of Anjelina Lohalith’s earliest memories is running to fetch milk from her family’s cows in Southern Sudan.

That was before her village was burned down and the fears of a forced marriage compelled her to flee to Kakuma.

One year on: Lohalith, who is focusing on the next Olympics, is determined to improve her time in the 1500m. “If others can break the world record, what will stop me?” she asks. Reflecting on Rio, she says she could not believe the size of the Brazilian city and how roads had been created “through the middle of mountains.”

“I stood at the top of a building and looked down at Rio,” Lohalith recalls. “That’s when I realized it was real. My time had come.”

Yonas Kinde left Ethiopia for Luxembourg in 2012 and immediately pursued his love for athletics, quickly becoming the best marathon runner in the tiny European nation.

One year on: Kinde is putting his experience to good use, coaching a young Eritrean athlete.

He has grown an afro to cope with the comparatively cold Luxembourg winters and hopes to reunite with his wife and daughter, before representing his adopted nation at Tokyo 2020.

Ibrahim Al Hussein lost his lower right leg in a bombing while trying to come to the assistance of a friend in danger near his Syrian home.

He woke twice during emergency surgery and “saw everything.” For two months, he went without painkillers or proper treatment.

One year on: The Rio Paralympics has given the swimmer who made headlines around the world for carrying the Olympic torch in Athens cause to dream again.

Al Hussein might not have made the final of the 100-meter freestyle, but in September he received the Whang Youn Dai Achievement Award for the athlete that “best exemplifies the spirit of the Games.”

Inspired by the Refugee Olympic Team’s story? Share your stories about the power of sport on CNN Sport’s Facebook page

Tegla Loroupe is described by members of the team as not only a leader but “our mother.”

From the first trials on the sands of Kakuma to the Games of the XXXI Olympiad, the 44-year-old Kenyan has accompanied the athletes every step of the way.

One year on: Loroupe, a world record holder across three distances, has now become a champion for peace.

Named 2016 UN Person of the Year, she is now overseeing the development of the next generation of refugee athletes. 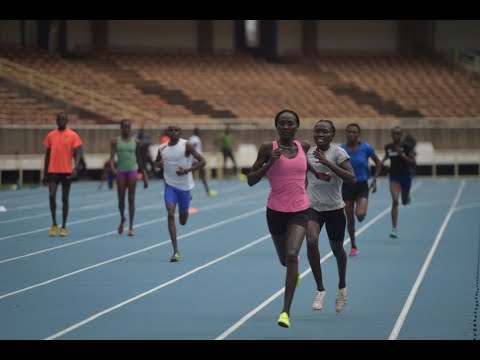