“Atypical” is actually pretty typical by TV standards – a bittersweet Netflix series about an autistic youth, powered by Keir Gilchrist in the central role and Jennifer Jason Leigh as his struggling-to-cope mother. Watchable but inconsistent, the half-hour series dilutes its genuine pathos and strengths with characters and situations that seem to have parachuted in from a different show.

Gilchrist turned out to be the best thing about Showtime’s “United States of Tara,” and he impressively follows up on that with his performance as 18-year-old Sam, who is awkwardly seeking to navigate the bridge from childhood to adulthood. Sam narrates what transpires while doling out bits of encyclopedic knowledge about things like the mating habits of penguins.

Like any number of shows about a family with a special member – “Tara” being a prime example – everything in “Atypical” flows from how the rest of the brood deals with the challenges that Sam brings into their lives. 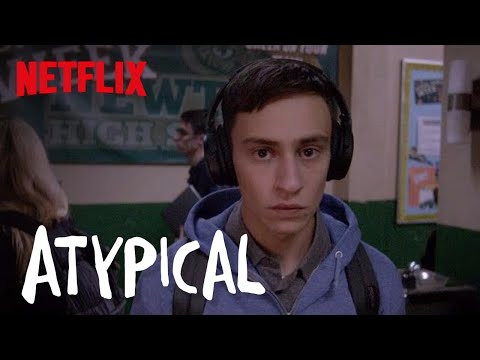 For mom Elsa (Leigh), that includes striking up a flirtation with a bartender (Raul Castillo) – causing her to wince when someone mentions the need for “self-care” at her support group – while carrying a lingering grudge against her husband (Michael Rapaport), who had trouble dealing with Sam in the past.

Sam’s sister Casey (Brigette Lundy-Paine), meanwhile, is a star athlete, but her accomplishments are frequently overlooked in the chaos that surrounds their home.

The series, however, which hails from producers of ABC’s “The Goldbergs,” too often falls back on clichés. Those range from Sam’s sitcom-style sex-obsessed pal (Nik Dodani) to Sam falling in love with his therapist (Amy Okuda), oblivious to the ethical issues and misreading her efforts to help him.

“Atypical” isn’t the only exploration of autism hitting screens in relatively short order, with ABC’s “The Good Doctor,” starring Freddie Highmore, filtering the disorder through the template of a medical procedural. They follow the BBC’s “The A Word” and HBO’s award-winning movie “Temple Grandin.”

The serialized storytelling pulls viewers along through the eight episodes, but if there’s a primary reason to watch, it’s Gilchrist. Almost single-handedly elevating the show when he’s on screen, the actor brings not just vulnerability to the role but also manages to make Sam’s various tics, inappropriate utterances and literal interpretations feel wholly organic and painfully real.

Beyond that, faced with the high expectations of a crowded premium-TV market, “Atypical” does something that its protagonist can’t – namely, blend in.