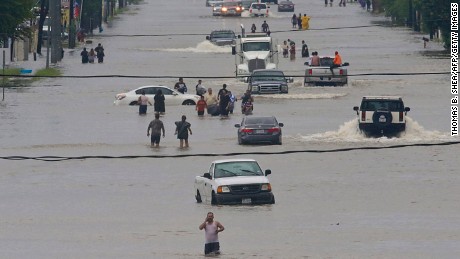 People walk through the flooded waters of Telephone Rd. in Houston on August 27, 2017 as the fourth largest US city battles with tropical storm Harvey and resulting floods.

Harvey's devastating impact by the numbers

(CNN)The toll that Harvey is taking is staggering.

It dumped an estimated 27 trillion gallons of rain over Texas and Louisiana during a 6-day period, says Ryan Maue of WeatherBell, a weather analytics company.
The rainfall has set a record for the most ever from a landfalling tropical cyclone in the continental US. Estimates put eventual total losses at as much as $75 billion. And the death toll continues to climb everyday.
"The word catastrophic does not appropriately describe what we're facing," said Rep. Sheila Jackson Lee, who represents much of Houston. "We just don't know when it's going to end."