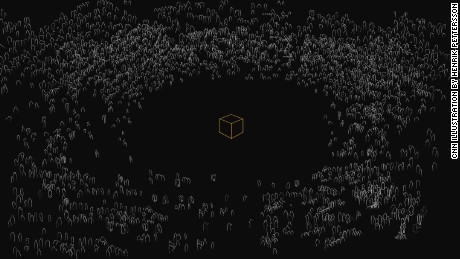 (CNN)For the 1.8 billion Muslims around the world, the Hajj is considered a spiritual pinnacle. Each year, up to three million pilgrims descend on Mecca -- the epicenter of the Muslim world -- to seek redemption, to forgive and to be forgiven.

Wrapped in white cloth, worshippers embark on the five-day pilgrimage, considered one of the five pillars of Islam. All Muslims who are physically and financially able are required to make the journey to Mecca at least once in their lifetime.
Mecca is meant to be the bedrock of Muslim unity, with the Hajj lauded as a place where pilgrims shed class, race, and nation. In his 1964 pilgrimage, less than a year before his assassination, black civil rights activist Malcolm X marveled at the "spirit of unity" between white and non-white Muslims -- he later disavowed many of his beliefs about racial separation on returning to the United States.
But as Saudi Arabia has taken a more muscular approach to foreign policy with the rise of a young Crown Prince, Mecca has emerged as a political fault-line. A diplomatic spat between Saudi Arabia and Canada over a human rights statement resulted in the closure of one of the main flights between Canada and the kingdom, reportedly complicating matters for hajjis, or Muslim pilgrims.
A bruising Saudi-led 2016 embargo on Qatar, and the dissolution of diplomatic ties with Iran in 2016 has also disrupted pilgrimages for nationals of those countries in recent years. In Yemen, the ongoing war between Houthi rebels and Saudi-backed forces has all but trapped millions of would-be Yemeni pilgrims.
Read More
Still, Mecca is brimming with over 1.5 million international pilgrims this year, according to Saudi officials. These are devout Muslims who tenaciously pursue the pilgrimage, enduring the inconveniences of an arduous journey and sidestepping hurdles put in place by a difficult political climate whose temperatures continue to climb, and ignoring a string of unbecoming stories about the Hajj, including stampedes, fires and sexual harassment.
They prefer instead to focus on spiritual nourishment that the Hajj promises to supply.

Many pilgrims converge on the city weeks before the start of the Hajj rituals.
Worshippers wear special white garments -- men wrap themselves in seamless, stitchless cloth, while women wear a simple white dress and headscarf. The clothing is said to symbolize human equality and unity before God.
Pilgrims begin the Hajj with a circular, counter-clockwise procession around the Kaaba, a cube-shaped structure that Muslims believe the Prophet Abraham from the Old Testament constructed. It's the most sacred shrine of Islam.
The Prophet Muhammed made the first Islamic pilgrimage in the year 628 AD, when he set out to Mecca with 1,400 of his followers. Mecca is considered to be a city for all Muslims and only Muslims. Non-Muslims are denied entry at all times.
Because of the centrality of the holy sites to the Muslim world, the Saudi monarch's preferred title is "Custodian of the Two Holy Mosques," referring to the Grand Mosque in Mecca and the Prophet's Mosque in nearby Medina.
Saudi authorities manage the entry and exit of pilgrims through strict visa applications and have a dedicated Hajj ministry, employing 40,000 workers. In the last 10 years, 24 million Hajj pilgrims have visited the city. Thousands of civil servants are deployed to the pilgrimage each year.

To go through the six steps of the Hajj, pilgrims walk in massive processions, shoulder-to-shoulder with Muslims from more than 80 different countries. Together they share meals, prayers and very close living quarters.
"Groups of West Africans in colorful garb, almost singing verses from the Quran. Old Chinese couples, groups of blonde Europeans and Americans; it felt as if we were watching the entire world walk past," wrote <