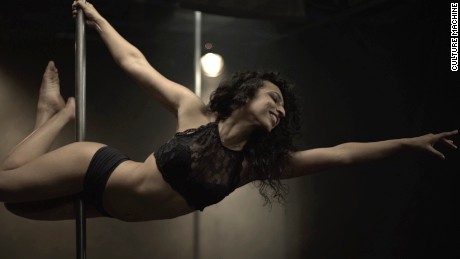 (CNN)At the end of a dusty lane off a bustling highway in a Mumbai suburb, is a very ordinary looking apartment block. Soulful music wafts out of a window. But in a first-floor apartment something very unusual is happening.

Inside Aarifa Bhinderwala's bright blue bedroom, there isn't a bed, wardrobe, or table -- just four shiny steel poles that stretch from floor to ceiling. Bhinderwala, 28, has been sleeping on a mattress in the living room for years.
From her bedroom, she practices and teaches the sport of pole dancing.
It's a controversial occupation for a woman in India, which still has conservative values when it comes to gender norms.
But Bhinderwala says she isn't out to shatter stereotypes or defy perceptions.
Read More
"I do it because I love it," she says. "I am a hopeless romantic. Everything I do stems from love."

Bhinderwala's love affair with pole dancing began three years ago while visiting her sister in Perth, Australia. She saw an advert for a pole dancing class and decided to try it.
"I liked the vibe of the class. The lights, the music, women from around the world, the high energy -- it was like a party," she says. "I found it fascinating."
Bhinderwala makes an inversion look easy.
After a couple of weeks, she achieved her first inversion: an upside down dance position on the pole. Previously, she had never done a handstand.
For the next two-and-a-half years, while she completed her MA in sociology at Mumbai University, Bhinderwala shuttled between India and Australia, where she took pole dancing courses, eventually becoming an advanced-level pole dancer.

It is uplifting, empowering and humbling.

"Poling transformed the person inside me, both physically and mentally," Bhinderwala tells CNN, in between showing off a range of acrobatic moves.
"It is uplifting, empowering and humbling," says Bhinderwala. "It's an incredible feeling when you learn to hold and control your own body weight in the air. You walk with a renewed self confidence."
Bhinderwala runs one of the only pole dancing studios in Mumbai.
Bhinderwala started choreographing her own pole routines to a range of music -- soul, jazz, old Hindi movie soundtracks. It became an art form.
<