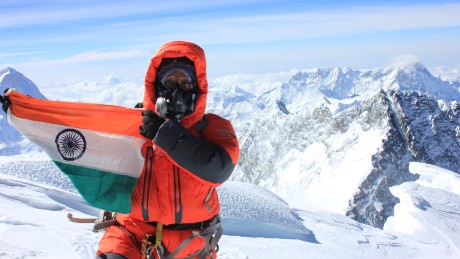 (CNN)Most people don't make it to the top of the world once.

But mother-of-two Anshu Jamsenpa, aged 38, has done it five times, all from the South Col route on the Nepalese side of Mount Everest -- an incredible feat for any mountaineer.
This year, she broke a world record and made global headlines when she became the first woman to conquer the 29,028-feet-tall (8,848 meter) Himalayan giant twice in five days -- first on May 16, and then again on May 21.
Anshu Jamsenpa completed her second ascent to the top of Mount Everest this year on May 21.
Astonishingly, this wasn't her first double ascent on a single trip.
In 2011, Jamsenpa summited the tallest mountain in the world on May 12 and May 21. She subsequently made a single summit in 2013.
Read More
Jamsenpa attributes her amazing achievements to the connection climbing Everest gives her to her faith.
"I always think that I am very close to god, I am getting a blessing," Jamsenpa tells CNN of her emotional state while on the mountain. "I only feel that whenever I am at the top."
Amazing stats and figures about Mount Everest

Jamsenpa was born in Dirang, a remote mountain town in the north-west Indian district of Arunachal Pradesh, which borders Bhutan and Tibet.
Small-town life had its advantages. "You're surrounded by nature," remembers Jamsenpa, referring to nearby Bomdila where she moved to as a child. Yet she also says the area was lacking in exposure to the outside world and opportunities.
The daughter of an Indo Tibetan Border Police officer father and nurse mother, Jamsenpa had three older sisters and a younger brother. She says she always knew she was different.
Mountain climber Anshu Jamsenpa.
"When I was small, my family used to watch TV in one room, and I would go to another room, sit quietly, draw the curtains and listen to music. I used to think differently."
While Jamsenpa grew up dreaming of becoming a journalist, she didn't attend university.
Rather, on her 16th birthday, she met future husband Tsering Wange, and fate steered her down a different path.
The week before at his family bakery, Wange had taken a cake order, requesting the text "Happy birthday Anshu Jampsenpa" written on it. He was curious about the girl with the unusual name.
"He called up my cousin (who had placed the order), and she invited him to my birthday party. He said: 'Yes, definitely -- I will come, and bring the cake myself.' So, that's how we met."
In 2000, when Jamsenpa was 21, they got married