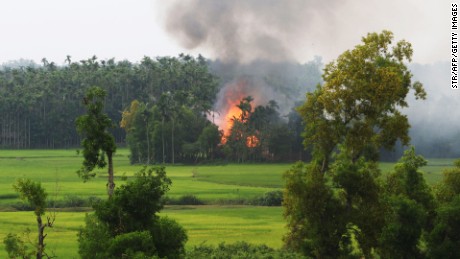 Smoke rises from what is believed to be a burning village in the southern Maungdaw area of Myanmar's Rakhine state on September 4, 2017.

'I knew them, yet they were killing us'

By Kathleen Prior, CNN

Cox's Bazar, Bangladesh (CNN)The men who came to kill Arafa Khatun were also her neighbors. "The Rakhines and the Hindus, they joined with the military. I watched them coming over the hill, like a team. As they came towards us to attack, I saw faces that I recognized. I knew them, yet they were killing us."

Khatun has eight children, but since the attack on her village of Shairapara, in Myanmar's Rakhine State, she can only find one of them, her 16-year-old son. He had been shot in the back and is now receiving treatment.
"It is an ethnic cleansing," said 50-year-old Khatun, who like her son is a member of Myanmar's Rohingya Muslim minority. "They massacred only the Rohingya villages. The other villages were left untouched while ours burned to the ground."
Similar stories are repeated throughout the many hastily constructed refugee settlements in southeastern Bangladesh, where hundreds of thousands of Rohingya refugees like Khatun and her son are now gathered, having been forced to flee their homes and villages across the border in Myanmar.
Tens of thousands of Rohingya refugees continue to arrive in Bangladesh by the day.
The United Nations estimates that over 400,000 Rohingya have arrived in Bangladesh since August 24, an average of 16,000 a day. The South Asian country, which is also dealing with the internal displacement of hundreds of thousands of its own citizens due to severe monsoon flooding, has been unable to cope with the sudden influx, leading to fears of imminent food shortages. On Sunday, one woman and two children were killed in a stampede as aid workers handed out relief packages near a refugee camp in Cox's Bazar.
Read More
At a newly established makeshift settlement in Gumdum, itself a spillover from larger preexisting camps located nearby, an estimated 50,000 people, mostly women and young children, huddle together under scraps of tarpaulin and plastic.
Familes endure cramped and filthy conditions on arrival in Bangladesh.
Azida Abad arrived at the camp several days ago along with her four young daughters. Her husband had been admitted to a local medical clinic with a high fever. In the cramped and filthy conditions, disease is rife. With the daily monsoon rains, the whole area is flooded and quickly turns to mud.
Abad recognized the militants that stormed into her village and reeled off their names like a class register. "They were in uniform, the military must have given it to them," she said.
The events that unfurled after August 25, in retaliation to an alleged Rohingya insurgency that left 12 Burmese security officers dead, have been deemed "a textbook example of ethnic cleansing" by UN human rights chief Zeid Raad al-Hussein.
The Myanmar government have denied this, claiming security forces are carrying out counter attacks against "brutal acts of terrorism."
In a statement released by the Myanmar foreign ministry, it purports the security forces are taking "full measures to avoid collateral damage and the harming of innocent civilians."
Yet still the violence continues and with it the steady stream of refugees.
<img class="media__image media__image--responsive" alt="Refugees huddle together under scraps of tarpaulin and plastic." data-src-mini="//cdn.cnn.com/cnnnext/dam/assets/170918122000-rohingya-bangkadesh-prior-1-1-small-169.jpg" data-src-xsmall="//cdn.cnn.com/cnnnext/dam/assets/170918122000-rohingya-bangkadesh-prior-1-1-medium-plus-169.jpg" data-src-small="//cdn.cnn.com/cnnnext/dam/assets/170918122000-rohingya-bangkadesh-prior-1-1-large-169.jpg" data-src-medium="//cdn.cnn.com/cnnnext/dam/assets/170918122000-rohingya-bangkadesh-prior-1-1-exlarge-169.jpg" data-src-large="//cdn.cnn.com/cnnnext/dam/assets/170918122000-rohingya-bangkadesh-p