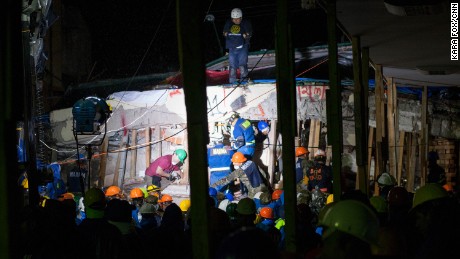 Mexico shrouds its sorrow in solidarity

Mexico City (CNN)Mexico's biggest earthquake in more than three decades brought parts of the capital to its knees on Tuesday afternoon. But moments later, as the earth continued to tremble, many of Mexico City's residents stood up and mobilized.

Volunteers cordon off an area of Mexico City's Coapa district to allow emergency vehicles to pass through.
Volunteers call out to others to locate adrenaline in the donated medical supplies.
Medics from the Mexican Red Cross stand by with a stretcher.
When news emerged that an elementary school had collapsed, city residents and people from surrounding regions -- including some hit hardest by the quake -- traveled to the city's Coapa district en masse, bringing everything and every skill they could muster to help dig out those buried under the rubble. At least 273 people died in the 7.1-magnitude quake.
A volunteer emergency worker listens for signs of life inside the rubble.
<img class="media__image media__image--responsive" alt="A volunteer calls out for additional supplies. " data-src-mini="//cdn.cnn.com/cnnnext/dam/assets/170921121526-21-cnn-mexico-city-0920-small-169.jpg" data-src-xsmall="//cdn.cnn.com/cnnnext/dam/assets/170921121526-21-cnn-mexico-city-0920-medium-plus-169.jpg" data-src-small="//cdn.cnn.com/cnnnext/dam/assets/170921121526-21-cnn-mexico