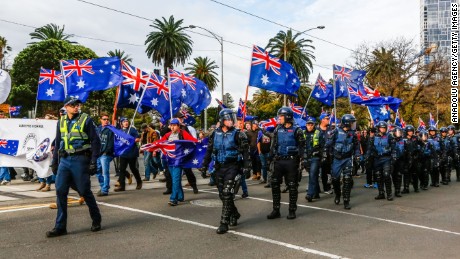 Police patrol as members of the right-wing nationalists the "True Blue Crew" march during a protest supported by the United Patriots Front, in Melbourne, Australia on June 25, 2017.

The self-proclaimed former neo-Nazi -- found guilty this month of inciting serious contempt for Muslims in an offensive online video -- is launching a new nationalist group called "Patriot Blue."
Patriot Blue is also the name of the fictional far right, anti-Muslim group in the upcoming Romper Stomper TV series, which reunites the director and several cast members from the iconic 1992 film by the same name, and is set to air over the Australian summer. In the movie, neo-Nazis targeted Asian immigrants.
The original film, starring Russell Crowe, created a storm of controversy in Australia and Britain for glorifying Nazi violence, and the sequel has already come under fire for giving a platform to extremists. Erikson hopes that appropriating the name will help him recruit the country's next generation of far right followers.
Russell Crowe starred in the original movie Romper Stomper released in 1992.
"People who watch that show will look for something, so they'll google 'Patriot Blue' and there we will be," says Erikson, who has bought two "Patriot Blue" domain names and is already selling T-shirts online.
Read More
"The youth follow popular culture so if there's a show that can symbolize some sort of counterculture, whether it's skinheads or patriots, they'll jump on board," Erikson tells CNN.
Stan, the Netflix-style streaming service behind the new series, and the filmakers have declined CNN's request for comment.
Even, if they legally prevented him from using the "Patriot Blue" name and the domains, Erikson's hoping to generate enough controversy and attention from the stunt to help grow and keep his new movement alive.

'How do I weasel my way into the conversation?'

The 32-year-old forklift driver pleaded guilty in 2014 to charges stemming from making threatening phone calls to a rabbi. He says he turned away from neo-Nazism after his fellow skinhead gang members beat up a 21-year-old Vietnamese student in Moonee Ponds in 2012.
Today, Erikson says he focuses his energy on supporting nationalistic ideas and strict immigration laws. He believes there's a direct link between the two.
"If we get more Islamic immigration we are going to get higher terrorism," he said.
Erikson, United Patriots Front (UPF) leader Blair Cottrell and Chris Shortis, who also says he's since dropped out of the group, made headlines in early September when they were found guilty of inciting serious contempt for Muslims. Two years earlier, a video posted on UPF's Facebook page showed the trio beheading a dummy while chanting "Allahu Akbar," Arabic for "God is great." Cottrell and Erikson are appealing the conviction.
United Patriots Front leader Blair Cottrell speaks during a protest organized by the anti-Islam True Blue Crew in Melbourne, Australia on June 25, 2017.
<div class="zn-body__paragraph" data-paragr