Teachers are trained to not reinforce certain behaviors

From the moment a child is born, its gender pretty much determines how they will dress, which toys they’ll be given and ultimately how they are meant to behave within society.

But some schools in Sweden are trying to strip away such gender norms.

There’s nothing obviously out of the ordinary at Sweden’s gender-neutral preschools at first glance.

There are no designated areas to play with dolls or building blocks. The toys have been strategically jumbled to create an environment for girls and boys to play together.

These two preschools in Sweden – Nicolaigarden and Egalia (meaning ‘equality’ in Latin) – go to great lengths to de-emphasize gender. Children are given the freedom to challenge and cross gender boundaries.

Rather than encourage children to do particular things, the teachers are careful not to box children based on their gender or subtly discourage them from doing certain things.

The school has removed the terms “girl” and “boy” completely. Instead they make a deliberate effort to call each child by their first name or the gender-neutral pronoun “hen”.

But is it necessary to intervene at such a young age, and what are the long-term effects?

A new global study found that young girls and boys are outfitted with “gender straitjackets” by the age of 10, resulting in lifelong negative consequences.

The Global Early Adolescent Study analyzed how gender is learned, enforced and reinforced among early adolescents in 15 countries.

It concluded that culturally-enforced gender stereotypes – which are linked to an increased risk of mental and physical health problems – are firmly rooted between the ages of 10 and 14. The study found these stereotypes leave girls at greater risk of exposure to physical and sexual violence, child marriage, and HIV. For boys, the risks can include substance abuse and suicide.

In Sweden, which is ranked as the fourth-most equal country in the world when it comes to gender, the government has made a concerted effort to emphasize equality in the Education Act.

Following a new amendment introduced in 1998 requiring all schools to work against gender stereotyping, Lotta Rajalin set up her first gender-neutral preschool for one to five-year-olds in Stockholm’s Old Town.

The gender-neutral policies at Rajalin’s schools ensure that stories, songs and dramatizations are screened or re-scripted to include non-nuclear families (single parents or same-sex couples) and heroines sweeping princes off their feet.

How to be a gender-neutral teacher

Perhaps the most important distinction in these preschools is the way the teachers treat each child.

To help identify any unconscious bias they have when dealing with girls and boys, the teachers filmed themselves interacting with children and took note of how they responded to the different sexes.

“After we had been filming and observing each other, we understood that it’s not the children we have to change, it’s ourselves,” Rajalin tells CNN.

They discovered they used different tones of voice when talking to girls or boys, and tolerated rowdiness in boys while discouraging it in girls. Similarly, they found themselves to be more likely to comfort a crying girl, while they would tell a crying boy to brush it off.

“When you change yourself and your thinking and your expectations, you will see new things and you will see that it’s better for children’s development,” she says.

Rajalin believes gender stereotypes limit the opportunities available to a child. Her gender-neutral teaching methods stem from what she calls “the whole life spectra” or “circle of opportunity.” This circle is often divided into two semi-circles – one for boys and one for girls.

Through gender-neutral teaching, Rajalin hopes to open up this circle of opportunities for all children to define themselves.

“We try to take away the barriers which stop both girls and boys doing what they want to do,” she says.

“We want all children to have the same opportunities to feel, to express themselves, to like what color they like, to play the sport they’re in, and so on. We don’t want to limit them.” 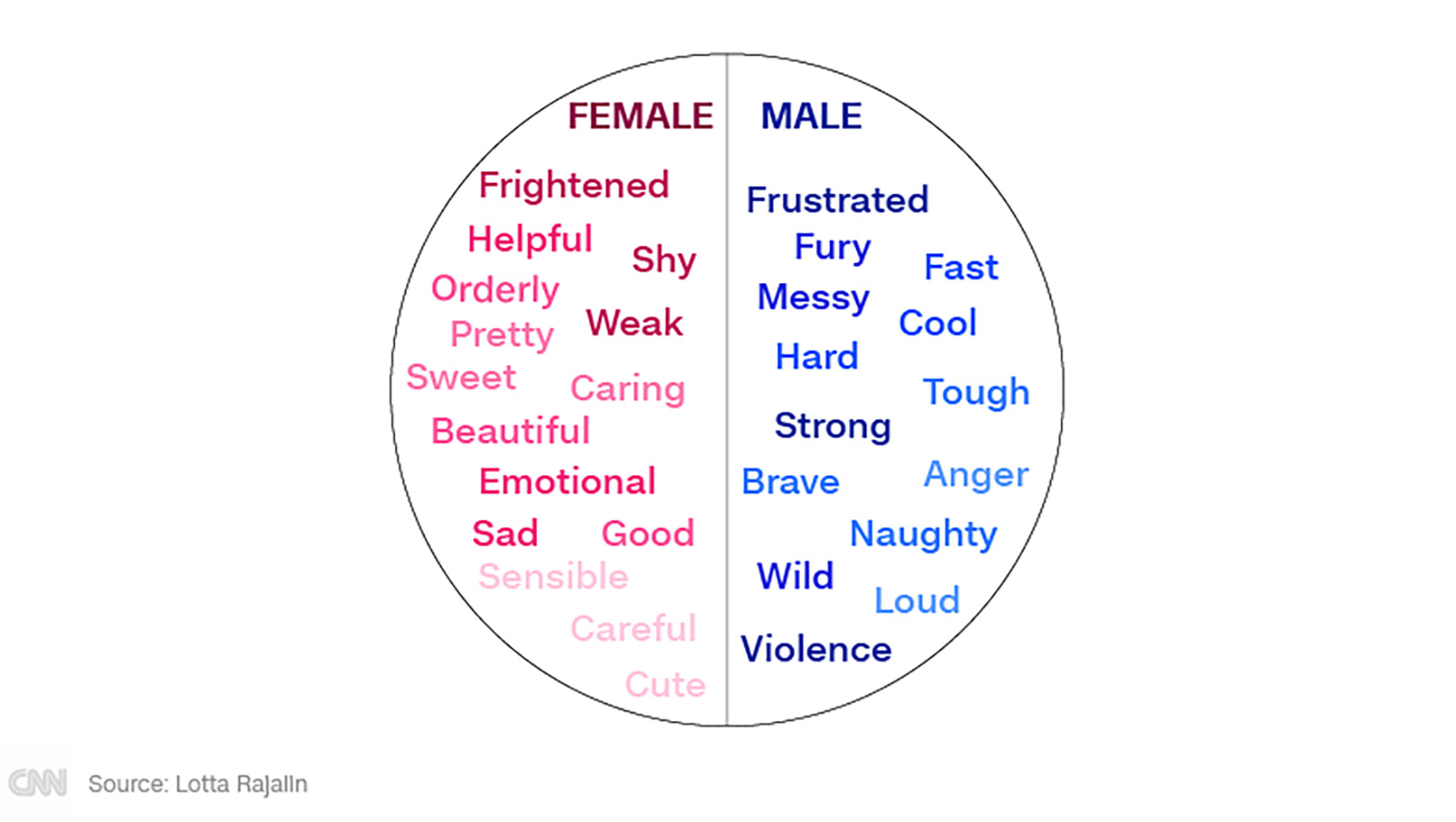 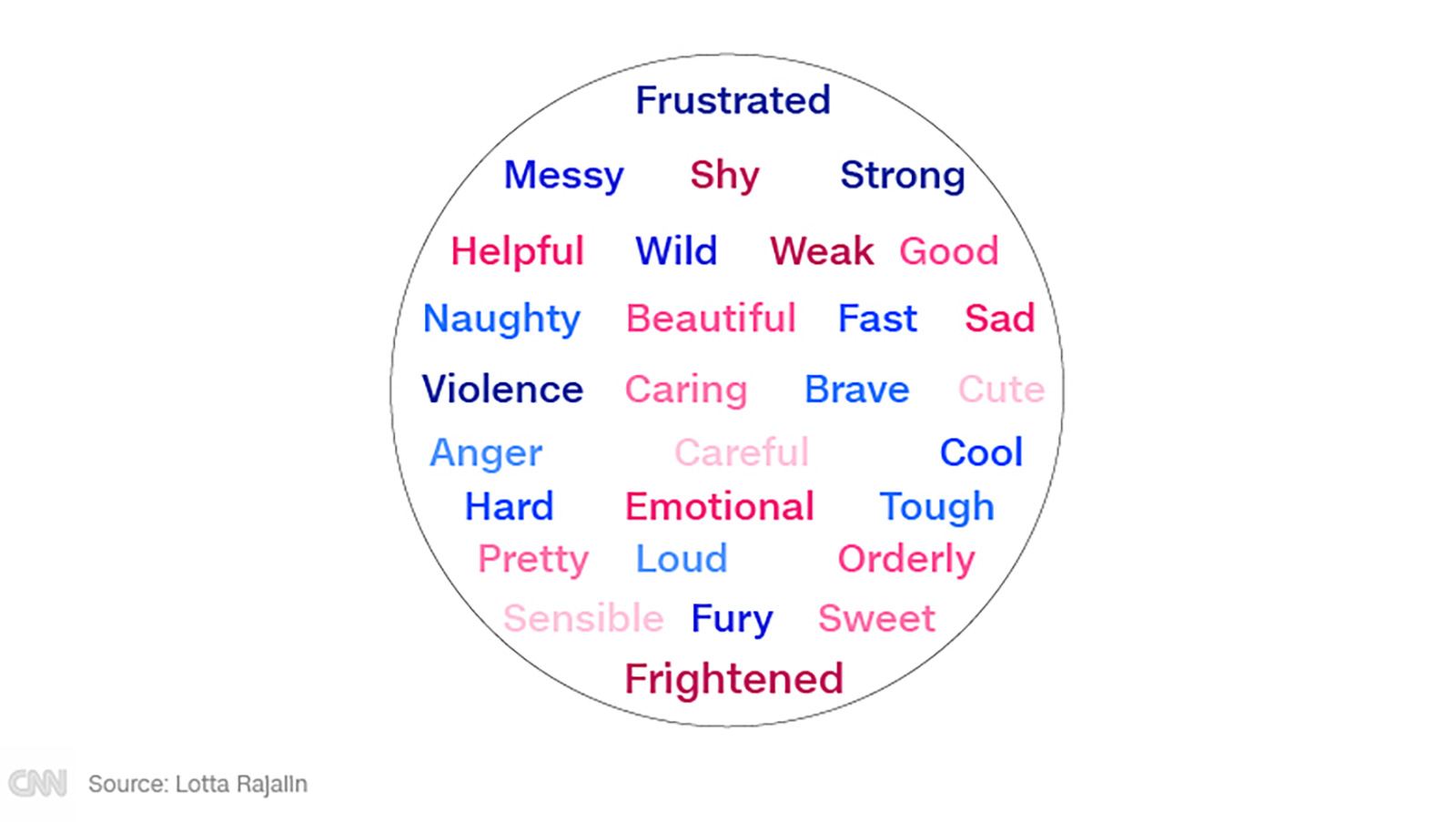 Rajalin wants to open the "circle of opportunities" to all children, regardless of their gender.

Following a small, structured observation of children at one of Rajalin’s preschools, Ben Kenward, a researcher in psychology at Uppsala University in Sweden and Oxford Brookes University in England, found these children had a reduced tendency to be influenced by gender stereotypes, compared to a control group of children from a typical Swedish preschool.

“The [gender neutral] pedagogy is having some of the effects that it’s intended to have, and if you’re committed to giving these young children the same opportunities … then our study suggests that this kind of pedagogy is a good tool.”

However, these gender-neutral policies have generated much criticism over the years.

Swedish psychiatrist and author David Eberhard considers calling boys and girls “hen” to be “intellectually dishonest” as it is being “blind to biological differences.”

“This is the kind of brainwash that works when the kids are small and in the short run they adapt to this, but what happens when they go to normal school and they find out they were living in a sect?” he tells CNN.

“This is a sort of a religious sect to say there’s no differences between men and women, it has nothing to do with science.”

Eberhard explained that he does not oppose boys choosing to play with dolls, but he draws the line at calling a girl or boy “it” or “hen”.

Rajalin believes a lot of criticism is misguided, as people do not fully understand what they are trying to do. “We are not trying to say girls should be boys or boys should be girls, we just want every person to have the right to be the person they are, regardless of gender,” she says.

Rajalin says her gender-neutral preschools give children the same opportunities, obligations and rights, regardless of gender.
Thinkstock

While Eberhard’s views are strong, he says gender-neutral schooling is unlikely to have any negative long-term effects on young children.

“I suppose that they [the children] are so sure about their identity that it doesn’t matter,” he says. “But, as individuals, you may very well have young kids of different sexes that become very frustrated or confused.”

He believes Sweden would be better off solving the problem of gender inequality in the real world.

Rajalin, however, believes adopting gender-neutral methods and exposing children to teachers of various different ethnicities, religions, sexes and sexual orientations, will better prepare them for the nuances of the real world. It will boost their self-confidence and set them up to be more successful in life, she says.

This is what happens when gender roles are forced on kids

Psychology professor Philip Hwang from the University of Gothenburg is not convinced. He thinks Rajalin’s gender-neutral preschools are harmless but overrated.

“I don’t really see any harm in it, but I think it pleases the parents more than it changes the children,” he tells CNN.

He says he has met a couple of parents that really believe sending their children to gender-neutral preschool will have lasting effects and that they will grow up in a gender-neutral society.

“It’s a statement more than something that has actual effect on children’s long-term development with regard to gender issues,” he says.

“It takes generations to change norms and values like this.”

Even Kenward, who is optimistic that the gender-neutral pedagogy is creating equal opportunities for children of both genders, is unsure what the long-term effects will be.

“It’s an open question what happens to these children when they move into primary school,” he says. “My guess is it [gender neutral pedagogy] could continue to influence their behavior potentially, not in a very strong way necessarily. But it may have some lasting effects.”