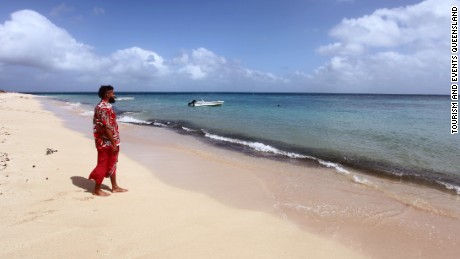 Australian NBA star Patty Mills walks on a beach on the small island of Mer.

Mer, Torres Strait (CNN)Australian NBA star Patty Mills could barely walk when he returned after midnight to his spartan lodging on the remote South Pacific island of Mer, his ancestral home in the middle of the Coral Sea.

The village Elders gave him as thorough a workout as anything meted out by his trainers at the San Antonio Spurs, who re-signed him as their point guard in August for a reported $50 million ($65 million Australian).
Mills is second only to Joe Ingles as the highest paid Australian in the NBA, ending last season shooting 41% from 3-point range, 11th in the entire league.
"My trainer was worried about all the days of training I've been missing coming up here, but when he saw me doing my dance practice and the workout my legs were getting he said I'll be fine," Mills said.
Mer, also known as Murray Island, is a tiny dot of land, less than five square kilometers, that sits in the Torres Strait between Australia's Cape York Peninsula and Papua New Guinea.
Read More
Fewer than 600 people live there, according to the latest census, and in August the entire island came out to welcome home one of their most famous sons.
Mills is a Torres Strait Islander from his father's side and an Australian Aboriginal from his mother's.
As one of the most successful ever Indigenous Australian sportsman, Mills is a role model for many young Aboriginal and Torres Strait Islanders.
And in the Torres Strait, where he spent part of his childhood, he's considered nothing short of a hero.

Career on the court

Patrick Sammy Mills is the second Indigenous Australian to play the NBA after his cousin Nathan Jawai. They come from a strong sporting pedigree.
Their uncle Danny Morseu was the first Indigenous player to represent Australia in basketball, at the 1980 and 1984 Olympics.
Born August 11, 1988, Mills grew up in Australia's capital Canberra but spent time on Thursday Island, the administrative hub of the Torres Strait, and the home of his father Benny Mills.
Now 29, the younger Mills was first exposed to basketball when he was four years old, training with the Shadows, an Indigenous Australian team established by his parents who worked on government projects for Indigenous people.
By 16, he had accepted a basketball scholarship with the Australian Institute of Sport and by 18 had taken up a college scholarship at Saint Mary's College of California.
Mills made his NBA debut in 2008 at the age of 20 after signing with the Portland Trail Blazers.
He has been point guard for San Antonio Spurs since 2012 and has represented Australia playing for the Boomers in the 2008, 2012 and 2016 Olympics.
Mills celebrates a basket during the Men's Basketball Bronze medal game between Australia and Spain at the Rio 2016 Olympic Games, August 21.
"It's been a very hard and long journey to get to this stage, but I want everyone to know that no matter what basketball jersey I put on, San Antonio, Australian Boomers, I represent everyone," Mills said in a speech to the Mer community in August, before performing his traditional island dance.
<div class="zn-body__paragraph" data-paragraph-id="paragraph_ED4D1126-6BAD-9CBF-8C82-E7566B