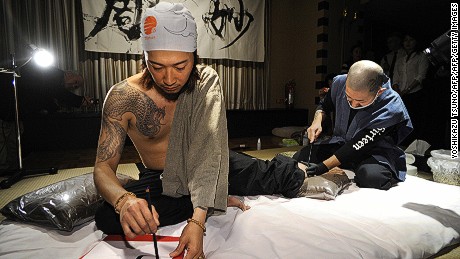 Tokyo, Japan (CNN)Black is a color you won't find on the walls of Ron Sugano's tattoo parlor in the upmarket Meguro district of south-west Tokyo, where quaint geometric houses line quiet streets.

Also absent are the laminated pictures of stretched lobe piercings and extreme ink work that are typically flaunted in grungy tattoo parlors around the world.
With its wooden Balinese art, Lonely Planet travel guides, and bright natural lighting, Shi Ryu Doh feels more like a spa.
And that's no accident.
Shi Ryu Doh is run by Tokyo-based tattoo artist Ron Sugano.
In Japan tattoos have long been stigmatized for their association with organized crime gangs, the Yakuza, who pledge their allegiance with full-body markings. Consequently, anyone with ink -- regardless of their profession -- cannot usually use public swimming pools, hot springs, beaches and even some gyms.
Read More
Sugano's clean, zen decor is a way of distinguishing his artistic practice, which mainly attracts foreign customers, from establishments that issue the Yakuza's ink work.
But it might not be enough to convince the Japanese government to allow his business to survive.
In a controversial move, an Osaka court last month upheld at appeal a ruling that only medical doctors can legally administer tattoos, meaning that artists such as Sugano are now technically committing a crime every time they pick up their tattoo gun.

An inkling of a crisis

An inkling of a crisis arose in 2015, when tattoo artist Taiki Masuda was convicted of a little-known law.
Police initially visited his parlor in relation to a criminal case brought against a pharmacy he had bought supplies from. Masuda's name was on the pharmacy's list of clients.
Officers then pivoted their investigation to his tattoo business and Masuda, now aged 29, was arrested for violating the Medical Practitioner's Act, which forbids anyone other than a licenced doctor from performing "medical practices."
A Health, Labor, and Welfare Ministry notice in 2001 ruled that tattooing, along with laser hair removal and chemical peels, is medical work because it involves a needle piercing the skin.
That notice has since been used to crackdown on tattoo artists, who claim their work is a form of self expression and therefore protected under Japan's constitution.
"Becoming a medical doctor costs a lot of time and money. It is ridiculous to think that you'd get a medical license to become a tattoo artist," Masuda says.
Kiyoshi Shimizu, of "Save Tattooing in Japan," (left) and Taiki Masuda, tattooer, in Osaka.
In 2015, after Masuda was fined 300,000 yen ($2,700), he decided to appeal (he lost that case last month, although his fine was halved) and co-founded an NGO called "Save Tattooing in Japan."
The NGO says it is now affiliated with around 200 tattoo artists, and campaigns for their right to practice their craft and for freedom of choice regarding body art.
Kiyoshi Shimizu, who co-runs the group with Masuda, say