Yasuhiro Yamashita: ‘Judo gives us hope in this fragile world’

Yasuhiro Yamashita is considered the best judoka of his generation

The Japanese icon opens up on life in judo

With a tear of his right calf muscle, Yasuhiro Yamashita’s lifelong dream was surely over.

The Japanese heavyweight judoka had envisaged himself atop the Olympic podium ever since he was “deeply moved” watching the Tokyo 1964 Games on television as a boy.

Suddenly, two decades later in Los Angeles, the 4,000 people that had crowded into a gymnasium to watch the sport’s greatest star drew breath.

Yamashita, then 27 years old, had won 194 consecutive matches ahead of the 1984 Olympic Games, sweeping aside everyone that stood in his way. The gold medal seemed his to lose.

But with one injury, just two rounds into the open weight division, the reigning world champion looked vulnerable.

“I did not feel the pain during the fight because I was concentrated on the opponent in front of me,” Yamashita tells CNN. “I did not lose my determination regardless of the situation.”

He had sustained the injury while attempting an Uchi Mata inner thigh throw against Arthur Schnabel of Germany, but somehow managed to get through the match, defeating his opponent by choke hold submission.

Barely able to walk, he still found time to bow.

Legends of Judo: Ryoko Tani, the greatest female judoka ever?

“Even during the hardest fought battles, a judo match starts with a bow, and ends with a bow to show respect towards the opponent,” says Yamashita. “Once the fight was over I focused on not making the injury worse, by walking carefully and resting as much as possible.”

But Yamashita’s limp was far more pronounced by 18:45 that evening when he faced Frenchman Laurent Del Colombo in the semifinal.

And sure enough, just two minutes in, the crowd witnessed a rare moment in judo: the imperious Yamashita was thrown off balance, with Del Colombo becoming the first-ever non Japanese judoka to score against him. 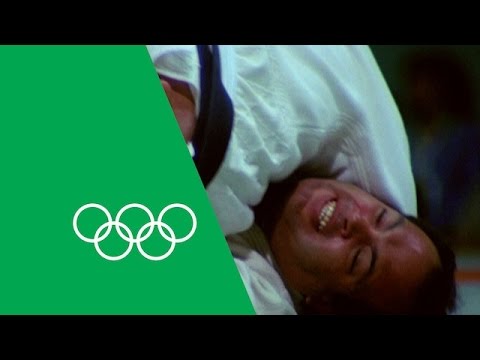 “In my semifinal, it was the first time I thought I might lose,” Yamashita afterward admitted.

Prevented from competing at the Moscow 1980 Olympics because of the Japanese boycott, he hadn’t come this far to be denied.

The 128kg Yamashita used all of his strength to pin Del Colombo for ippon after 2 minutes and 12 seconds, advancing to the final against Mohamed Ali Rashwan of Egypt – a man he had never faced before.

“Judo is a bridge that connects the world’s people, cultures and countries.”

He only needed 65 seconds to secure gold, once again getting the better of his opponent with his unrivaled Ne-Waza technique, holding him for 30 seconds for ippon.

“The referee’s call seemed to come from far away,” Yamashita remembers. “I stood in the middle of the loud cheers and I felt I was the happiest man in the world.”

Rashwan, for his part, famously avoided the injured leg of the opponent and won an international fair play award for his conduct.

Yamashita, who had been determined not to betray the slightest emotion all day, clenched his teeth and looked to the heavens.

“He would have taken part in this final match even if he had a broken leg!” the commentator exclaimed.

“Oh there’s no doubt about it,” replied co-commentator and US coach Paul Maruyama. “The entire burden of Japan was on him and he had to win.”

As the anthem begun, Yamashita had to be helped onto the podium, but his dream had come true.

‘A bridge to connect the world’

The gold medalist had reached the pinnacle of his sport and, unbeaten in 203 consecutive bouts, he retired a year later aged just 28.

Since, Yamashita has occupied a number of roles, from coaching Japan’s next generation to heading up the Japanese Olympic Committee ahead of Tokyo 2020.

The first judo school dates back to 1882 in Tokyo. Traditionally a Japanese practice, it has gradually spread across the planet and established itself as one of the world's most popular combat sports.
Dan Mullan/Getty Images Europe/Getty Images
Literally meaning "gentle way," judo techniques harness an opponent's force to your own advantage by throwing and pinning them to the ground.
Ken Ishii/Getty Images AsiaPac/Getty Images
Judo was first seen at the Olympics in Tokyo in 1964, and a women's competition was added at the Barcelona Games in 1992.
Central Press/Hulton Archive/Getty Images
No judoka has more world championships gold medals than Teddy Riner. In September 2017, the legendary Frenchman won his ninth title, before hitting double figures at an open weight competition in Marrakech.
ATTILA KISBENEDEK/AFP/AFP/Getty Images
"It is a sport that demands an irreproachable lifestyle," Riner tells CNN, "a sport that demands rigor."
David Ramos/Getty Images South America/Getty Images
On the women's side, Ryoko Tani's record stands out. The Japanese Judoka has seven world titles, and upon her retirement was hailed as the "best female judoka ever."
OLIVIER MORIN/AFP/AFP/Getty Images
Majlinda Kelmendi tears up after being crowned Kosovo's first ever gold medalist at the Rio Olympics in the women's 52 kg weight category.
Laurence Griffiths/Getty Images South America/Getty Images
At 218 kilos, judoka Ricardo Blas Jr. (seen here on the right competing at London 2012) is the world's heaviest Olympian.
Quinn Rooney/Getty Images Europe/Getty Images
Russian President Vladimir Putin is a judo master, denoted by wearing a black belt.
ALEXEY DRUZHININ/AFP/AFP/Getty Images

World Judo Championships: An introduction to the 'gentle way'

“I developed a passion for Judo at a young age and it is impossible to imagine my life without this discipline,” he tells CNN.

“Without Judo, I would not be the person I am today. The people I have met, the experiences I have had, the things Judo have taught me are endless.

“Today, in this fragile world, Judo gives us hope to overcome the obstacles of political tension, animosity and discrimination. By practicing Judo, people learn the core values of respect and above all, on the tatami there is no border nor religion.

“Judo is a bridge that connects the world’s people, cultures and countries.”

One man lucky enough to work under Yamashita was current Japan head coach Kosei Inoue – someone the 60-year-old “fully trusts” ahead of the sport’s homecoming in 2020.

“The current generation are blessed to have the 2019 Tokyo World Championships and the 2020 Tokyo Olympics in their prime time,” says Yamashita.

“I sincerely wish that their performances will give the Japanese citizens hopes and dreams. As the president of the All Japan Judo Federation I will do everything in my power to have Japan host spectacular events in 2019 and 2020.”

READ: Kosei Inoue – “Judo is similar to life itself; you get thrown and you stand up again”

The likes of Hifumi Abe and “Ippon Hunter” Hashimoto Soichi already adorn billboards across the country.

But, though Japan remains the team to beat, it’s a Frenchman that’s come closest to Yamashita in the debate about the greatest judoka ever.

Unbeaten since 2010, six-foot-eight, 140-kilogram man mountain Teddy Riner has won the past nine world titles in the heavyweight division.

Should he continue his win streak, he will break the unbeaten record Yamashita has held for over three decades.

Where does Yasuhiro Yamashita rank among Japan’s greatest sportspeople ever? Have your say on CNN Sport’s Facebook page

“For Teddy to accomplish what he has done over the years, and to continue his win streak in Budapest is truly commendable. Riner is a global icon and has contributed to the development and popularity of Judo as a whole.

“I believe his objective is not to pass my win streak, but merely to discover, and overcome, his own individual limits. If he does pass my record, I would like to warmly congratulate him.”