On the 50th anniversary of his capture in Vietnam, Sen. John McCain recalled the specifics of his ordeal – and fellow prisoners recounted the courage with which he faced it.

“Hard to believe 50 years ago today my A-4 Skyhawk was shot down over North Vietnam,” McCain wrote Thursday in a Facebook post. “The great honor of my life was to serve in the company of heroes in Vietnam, Americans whose comradery, bravery and resilience in the face of tremendous hardship inspired us to resist our captors and find strength and hope even in the darkest of hours.” 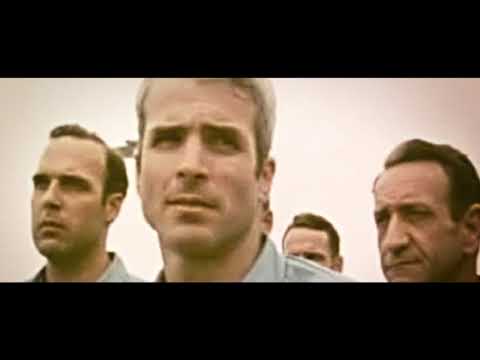 The Arizona Republican looked back on the experience in a video featuring archival news footage and photos, along with recollections from fellow prisoners of war.

McCain was captured in 1967 and held in the infamous detention facility known as the “Hanoi Hilton” for more than five years, where he was repeatedly tortured. He was released in March 1973.

“I met John McCain in the Hanoi prison camps when I watched him through a peephole in my door display incredible courage and stamina under the most unbelievable conditions,” Col. Tom Moe said in an undated clip in the video. “I watched him personally go through these situations, and he would resolutely stand up to the enemy, not only refusing early release but maintaining his courage and his resistance all the way until the day we came home.”

The video also features McCain’s own memories of the time from a 2003 interview. The senator rarely addresses his time as a POW publicly.

“I think he feels that it’s just wrong to try to trade on being a hero, but he is,” Col. George Bud Day, McCain’s POW roommate, says in a clip.

McCain has increasingly emerged as a figurehead for the Republican opposition to President Donald Trump. In a blistering speech last week widely seen as a rebuke of Trump’s politics, McCain warned against the US turning toward “half-baked, spurious nationalism cooked up by people who would rather find scapegoats than solve problems.”

After, Trump warned that McCain should “be careful.”

McCain also appeared to target the President’s Vietnam War-era military deferments in an interview this week.

“One aspect of the conflict, by the way, that I will never ever countenance is that we drafted the lowest income level of America and the highest income level found a doctor that would say they had a bone spur,” McCain told C-SPAN.

Trump, who attended the private New York Military Academy as a young man, received five military draft deferments during the Vietnam War, including one medical deferment after he was diagnosed with bone spurs in his foot.

The feud between the two stretches back to the 2016 presidential campaign, when then-candidate Trump scoffed at the McCain’s time as a POW.