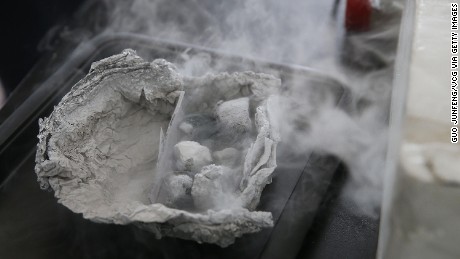 Flammable ice mined from the Shenhu area of the South China Sea in 2017.

(CNN)Japan's relationship with the energy sector is, at best, complicated.

Having virtually no oil, coal or natural gas to fire its power plants, Japan was forced to import over 90% of its energy in 2014. It is the world's third largest importer of oil and coal, and the number one importer of liquefied natural gas.
In 2016, its gas bill was $28.9 billion.
Furthermore, its 50-plus nuclear reactors, once considered a brilliant solution to its energy resource dearth, today mostly stand idle following the devastating Fukushima Daiichi nuclear power plant meltdown, in 2011.
But Japanese scientists may have found an innovative end to the country's energy woes.
Read More
They are pioneering a new technology that could reshape the global energy industry. Even better, a technology that revolves around a resource which Japan has in abundance buried under the ocean.
The Japanese government wants to burn "flammable ice" for energy.

A new type of energy

Worldwide there are up to 2,800 trillion cubic meters of methane-bearing gas hydrates -- a frozen mixture of water and natural methane -- according to the United States Energy Information Administration.
Vast reservoirs of this resource are found where high pressures and low temperatures combine -- i.e. buried inside thick Arctic permafrost and under deep ocean floors.
Possibly the planet's last great source of carbon-based fuel, gas hydrates are thought to contain more energy than all the world's other fossil fuels combined.
So far though, no one is close to being able to extract it commercially.
Japan is trying. Between 2002 and 2017, its government spent around $1 billion on research and development, according to the Ministry of Energy, Trade and Industry.
"There are two reasons the government wants to develop this technology," says Ryo Matsumoto, professor of geology at the Gas Hydrate Laboratory at Tokyo's Meiji University.
"The first is to secure energy resources -- if they can exploit a domestic resource they will increase their energy security. The second is that they are trying to decrease carbon dioxide emissions from fossil fuels."
Natural gas consumption emits roughly half the amount of carbon dioxide that coal does.
"Because natural gas is a cleaner source of energy, Japan wants to increase the proportion of natural gas used in the entire energy structure."

What is flammable ice?

Flammable ice doesn't look that different from something you might use to chill a cocktail, but the similarity stops there.
<img class="media__image media__image--responsive" alt="A scientist holds marine natural gas hydrate trapped in icelike crystals, extracted from the seabed of the Shenhu Area of the northern South China Sea. Similar marine natural gas hydrates have been extracted from Japan. " data-src-mini="//cdn.cnn.com/cnnnext/dam/assets/17092517