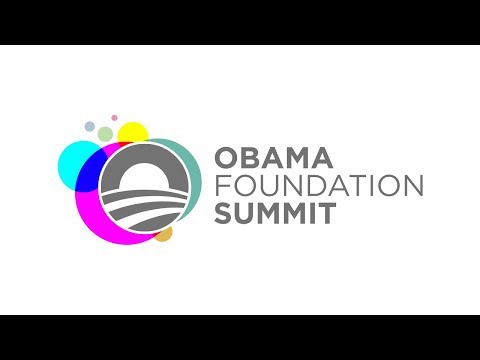 Watch the full version of Adebola Williams' speech at the Obama Foundation Summit above from 01:02:35

Nigeria's Adebola Williams got a standing ovation from the crowd, including Barack Obama after his speech

The Obama Foundation Summit was a gathering of the world’s most thoughtful and passionate civic leaders.

From October 31st to November 1st, change agents from all walks of life gathered in Chicago to discuss ways to make more meaningful impact in their local communities.

Co-founder of Red Media Africa, Adebola Williams, spoke in the closing session themed “Collective Power” and earned a standing ovation from the crowd, including Barack Obama after his speech.

Speaking alongside Williams in this session were award-winning actor and musician Common, author and journalist Anand Giridharadas and founder of the Equal Justice Initiative Bryan Stevenson, among others.

Williams addressed how youth and the media in Africa can rewrite the hopelessness that has for so long defined the continent.

Here are some of the quotable moments.

1. The African continent is filled with promise

Adebola Williams took us on a brief journey through the popular narrative of Africa as a place of desperation and helplessness to the present day Africa, which he believes is buoyant with promise. Williams believes that young people are doing great things around the continent and will lead its transformation.

2. The hopeless person is a ticking time bomb

For many underemployed and poor young people in Africa, this is a poignant statement. Williams argues that to be hopeless is to be without direction and purpose. This person is a ticking time bomb.

3. Young people must believe in the power of their own gifts

Williams says he started Red Media Africa in 2004 with two of his friends to change the narrative of Africa as a place of total deprivation and misery to a place of promise. The idea was to make young people hungry enough for change, for positive impact in their societies.

4. The currency of this generation is talent

Williams believes that talent can change a lot of situations in Africa. Young people, he believes, need to discover their talents and how to apply these talents to solve specific needs in the society.

5. The media defines our choices

While emphasizing the role of the individual person in society, Williams talks about the media as a powerful tool for driving change in Africa.

6. The media must provoke action

He goes further to talk about the media as the force that not only shapes conversations, but provokes the citizens to act.

7. There’s nothing more powerful than a committed group

8. We must end the conspiracy of silence in Africa

Williams touches on elections and the power of the electorate to demand accountability from those they have elected. The conspiracy of silence in Africa must not be allowed to continue. It has done the continent no good.

9. Hope is our weapon…action is the remedy

He calls for hope among Africans, a more responsive media and active citizens who hold leaders accountable. This is where the quest for sustainable change must begin.

10. Leaders are not in power to be feared; they are there to serve

Williams ends by encouraging young people to hold their leaders accountable. He reminds us again that the citizen is powerful and should take responsibility for driving change in the society.