By Tom Page, CNN
Updated 8:31 PM EST, Wed November 15, 2017
Link Copied!
Ad Feedback
Devel Sixteen —
A new-look concept of the Devel Sixteen is unveiled on the first day of the Dubai International Motor Show 2017. The motor company aims to hit 300mph with the vehicle when it begins testing.

So how did the motor industry get here? The term "production car" is not well defined, but here are a few of the fastest production cars in the supercar era, and contenders for the 300mph crown.
courtesy DWTC
Koenigsegg Agera RS —
It hasn't yet been verified by Guinness World Records, but the Koenigsegg Agera RS is now the fastest production car in the world. It clocked a two-way average speed of 277.9mph across an 11 mile stretch of Nevada highway on November 4, claiming a raft of other titles in the process, including 0-400kmph in 33.29 seconds. The Agera RS's top speed on one run hit a staggering 284.6mph according to the manufacturer.
Koenigsegg
Hennessey Venom F5 —
The Venom F5, made in Texas by US speed specialists Hennessey, has its hat in the ring for 300mph. With 1,600bhp under the hood, the successor to the 270.5mph Venom GT has some serious muscle, although it hasn't received a top speed test yet. One of 24 produced can be yours for $1.6m.
Hennessey
Bugatti Chiron —
We still don't know how fast the Chiron can go. The German beast, unveiled in 2016, has 1,479bhp but its top speed as so far been limited to 261mph. The reason? Tires. A test driver for the Chiron told Popular Mechanics in June 2017 that no current street legal tire set can handle the forces exerted on it by the Chiron at full tilt. There's hope however that the Bugatti will receive a top speed test in 2018. Could it reach 300? Its speedometer does go to 310...

courtesy bugatti
Hennessey Venom GT —
For a while the Venom GT was unofficially the fastest car in the world, hitting 270.5mph on a single run in 2014 at the Kennedy Space Center. Adapting the chassis of a Lotus Exige, the GT will go from 0-60mph in 2.7 seconds -- and 0-200mph in 14.5.

Hennessey
Bugatti Veyron 16.4 Super Sport —
The 16.4 was beefed up with the Super Sport in 2010. Electronically limited to 258mph for tire reasons, in testing the Super Sport hit 267.9mph. Limited to a 30-unit run, including five Super Sport World Record Editions, they're all sold out.
Bugatti
Bugatti Veyron 16.4 —
When the Veyron landed in 2005 it caused a paradigm shift within the supercar scene. Clocking 253.8mph in verified tests, it blew the previous record out of the water and proved it was possible to go super fast in super comfort.
Bugatti
Koenigsegg CCR —
Produced between 2004 and 2006, the Koenigsegg CCR briefly snatched the crown from the McLaren F1 when in February 2005 it clocked 388kmph (241.1mph) at the Nardo Ring, Italy. Embodying large technological leaps, its reign would be shortlived.

Cameron Spencer/Getty Images AsiaPac/Getty Images
McLaren F1 —
The 1990s' defining supercar, the F1 screamed luxury, from its gold-lined engine bay to the "look at me" center aligned driver's seat. All these features were grounded in performance, however, and the F1 could hit 240.1mph with the rev limiter removed. In a game of incremental gains, the McLaren held the production car speed record for a whopping 8 years between 1998 and 2005.
McLaren Automotive Limited
Jaguar XJ220 —
The XJ220 was only produced between 1992 and 1994, but it remains the fastest Jaguar ever made. Testing at the Nardo Ring in June 1992 topped out at 212mph with the car configured to production specification, while it hit 217.1mph with the rev limiter increased and catalytic converters removed. While it was a world-beater until 1993, it never did hit the 220mph it was supposedly named after.
Jaguar Land Rover
Ruf CTR —
The classic Porsche bodywork hid some serious engineering nous from Alois Ruf's team. Known affectionately as the "Yellow Bird," the Ruf CTR twin turbo hit a then-staggering 212.5mph when tested at the Nardo Ring, Italy in 1987. Three decades later, Ruf has brought the CTR back with a 223mph top speed and a look that says "if it ain't broke, don't fix it."
RUF
Porsche 959 —
There's clearly still a market for this iconic car -- a 959 Sport sold for a cool $2.08m at auction in February 2017. Launched in 1986, the non-sport version had a relatively large run of 292 units compared to some record breakers, and a top speed of 196mph. The Sport version was limited to 29 units, and when tested by Auto, Motor und Sport magazine clocked 339kmph (210.7mph).
Porsche

The era of the 300mph supercar may soon be upon us. Or it might not. It depends if you’re on board with astonishing claims of Dubai-based motor company Devel.

After teasing the petrol-head community for years with a concept, Devel launched an updated prototype of Sixteen, its eye-wateringly powerful hypercar, at the Dubai International Motor Show 2017.

Its creators say Sixteen will hit 300mph when it begins testing – enough to grab the title of world’s fastest car and drive off into the horizon with it. If all the bluster turns out to be true, it could represent the kind of leap not seen since the Bugatti Veyron landed in 2005.

Much of the skepticism surrounds the Sixteen’s reported 5,000 brake horsepower (bhp) engine. To put it in context, the Koenigsegg Agera RS – 277.9mph world record holder as of November 2017 – has a paltry 1,360bhp, while competitor and (unverified) claimant to the 300mph throne, the Hennessey Venom F5, has a 1,600bhp 7.4 liter, twin-turbocharged V8.

But thanks to Devel subcontractor Steve Morris Engines (SME), we have evidence that this hot rod is more than just an exercise in wishful thinking. On November 3, the Michigan-based manufacturer released a video purporting to show the Sixteen’s colossal 12.3 liter, V16 quad-turbo engine producing a whopping 5,007bhp on a company dynamometer. How it will function on the track remains to be seen, however. 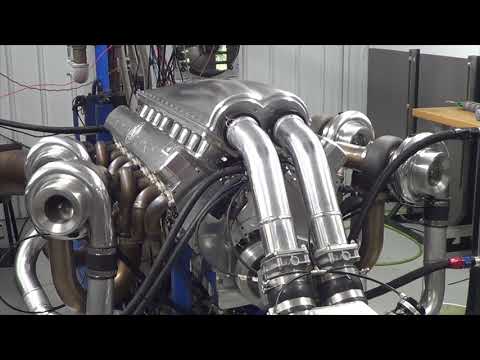 SME joins Italian motorsports house Manifattura Automobili Torino (MAT) in steering the Sixteen into production. The latter specializes in one-off builds, and is responsible for the Scuderia Cameron Glickenhaus’ SCG003S and the Ferrari P4/5 by Pininfaina in recent years. MAT CEO Paolo Garella talks about the Devel potentially surpassing 500kmph (approx. 310mph) in promotional material, and admits with a smile that “we are completely crazy.”

A production version of the Devel Sixteen concept on show in Dubai this week.
Devel

Speaking from the Dubai Motor Show, Devel developer Rashid Al-Attari told CNN he expects the car to be completed “in the next 12-18 months,” including testing.

There is still a question marks over the tires, he adds, saying that with the correct set the Sixteen “should” cross the 300mph threshold. Street legal tires have yet to be manufactured that can handle such speeds – for similar reasons, the Bugatti Chiron has not yet reached its potential top speed, rumored to also be in the 300mph region. Al-Attari explains Devel is currently considering two tire manufacturers, but is unable to disclose their names.

On a note that will disappoint only ultra-high net-worth petrolheads, Al-Attari admits that the 5,000bhp Sixteen will not be street legal, describing it as “more of a dragster.” However, he revealed Devel is working on two road legal versions of the Sixteen: A V8 with 2,000bhp and a V16 quad-turbo with 3,000bhp. Their projected top speeds are as yet unknown.

Prices for the V8 will start at $1.6m, and the V16, $1.8m, according to the Devel developer, adding that he has no plans to limit the production run of the supercar.

When asked about what he required from his supercar, the wealthy developer told CNN he “wanted the horsepower and a car that is really spacious” – the latter not normally a hallmark of record-breaking speedsters.

We’ll find out whether Devel has delivered on both counts in the near future, if the company’s timeline holds true. But we won’t find out in Dubai, says Al-Attari. He’s set his sights further afield for the launch of the first fully-functional model: “the US, the UK, Germany… it could be anywhere.”